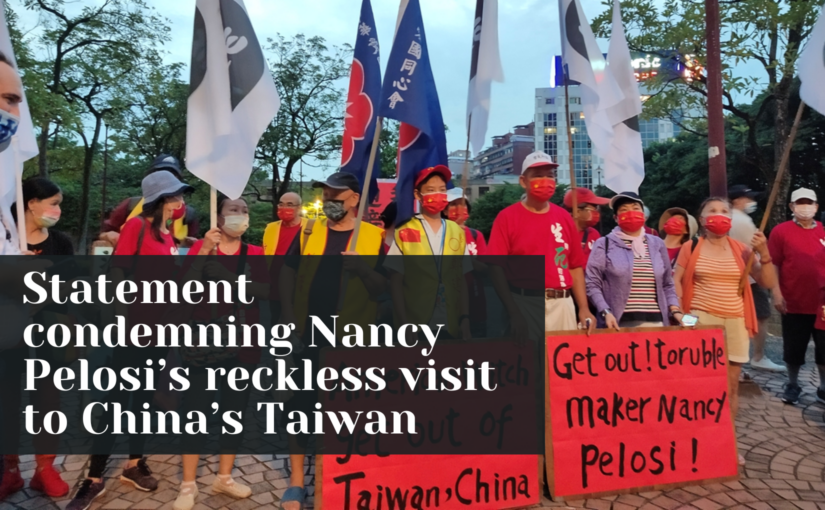 Organizations wishing to add their signatures to this statement should contact us at info@socialistchina.org

We condemn in the strongest possible terms the provocative and war-mongering visit of US House Speaker Nancy Pelosi to China’s territory of Taiwan.

Pelosi is a reactionary, anti-working-class imperialist politician with a long record of inveterate hostility to Socialist China and the Chinese people. Her visit to Taiwan is a major political provocation that carries with it a grave danger of leading to regional and even world war. It is a gross violation of international law and, in particular, of UN General Assembly Resolution 2758 and the clear provisions of the three joint communiques by China and the United States.

There is only one China in the world and its sole legal government is that of the People’s Republic of China. This is an absolute and immutable fact on which there is no room for compromise. This much is recognized by 180 countries around the world, including the US, as well as by the United Nations. When and how China completes its historic goal of complete national reunification is the internal affair of the Chinese people and the Chinese people alone. No outside interference of any kind is acceptable.

Pelosi’s visit once again makes clear to all humanity that the United States is the world’s number one rogue state. Its diatribes about a so-called ‘rules based international order’ are nothing but a fig leaf for its hegemonic behavior, its gangster-like bullying and its flagrant disregard for international law.

The idea that Pelosi’s visit is some kind of unilateral action, for which the US administration is somehow not responsible, is ridiculous. She is constitutionally the second in line of succession to the Presidency. As Pelosi’s military aircraft landed in Taipei, the US assembled a veritable armada in waters off Taiwan’s east coast, including an aircraft carrier strike group, a guided missile cruiser and a destroyer. As Commander-in-Chief, President Biden bears full responsibility for this.

Pelosi’s visit caps – and escalates – a series of moves by both the present US administration and its predecessor to encourage the separatist element in Taiwan, to undermine the One China principle, to escalate the militarization of the region, and to gravely threaten peace and stability in the Asia-Pacific region and indeed the world. This includes public remarks by Biden himself on several occasions. As President Xi Jinping solemnly pointed out to Biden in their recent telephone conversation, those who play with fire will end up getting burned. The United States bears full responsibility for its egregious actions and for all the consequences arising therefrom.

We stand by the Chinese people, government and military in their just response to this serious infringement of China’s sovereignty and territorial integrity. We join with the brave people of Taipei who gathered outside Pelosi’s hotel, to demand, in words that echo and resonate from Cuba to Korea and from Venezuela to Iran: “Yankee, go home!”