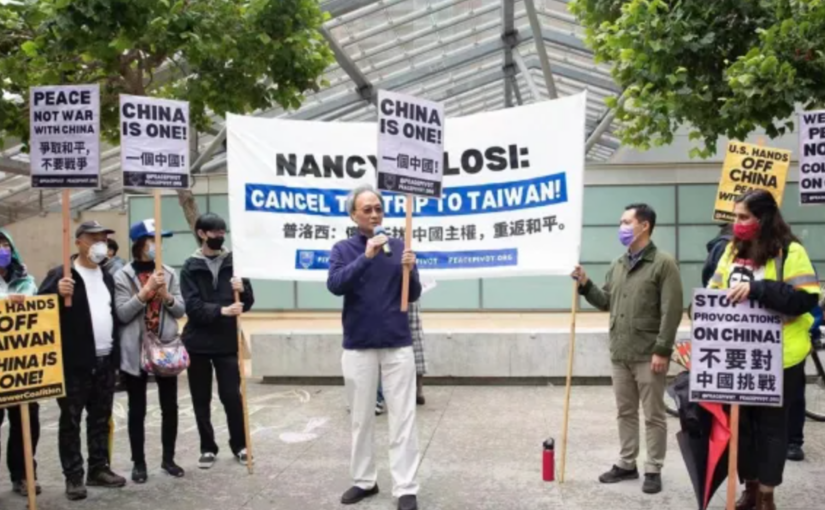 In this article, first published by Struggle/La Lucha, Stephen Millies situates US Speaker Nancy Pelosi’s visit to Taiwan last week against the background of her family’s reactionary history. Both her father and brother were mayors of Baltimore, with a notorious track record of racism and segregation. Setting out some of the true history of Taiwan, he also unmasks Pelosi’s utterly specious claim to be upholding human rights, whether in Taiwan, the rest of China or the United States.

Nancy Pelosi, the speaker of the U.S House of Representatives, landed in Taiwan Province on August 2. Her trip is a dangerous provocation against the People’s Republic of China.

The Pentagon Papers later admitted this was a lie, a complete fabrication. That it was a lie didn’t stop LBJ, who used the lie to start bombing Vietnam.

Even the United States government concedes that there’s only one China. Because it’s an island, Taiwan is the only part of China that wasn’t liberated in 1949 by the People’s Liberation Army during the Chinese civil war.

With U.S. assistance, the defeated dictator Chiang Kai-shek fled to Taiwan Province in 1949. His regime had already slaughtered 28,000 or more people in Taiwan during a massacre that began on Feb. 28, 1947.

It’s doubtful that TV’s talking heads will mention that atrocity or that “democratic” Taiwan was under martial law from 1949 until 1987.

Nancy Pelosi claims she is going to Taiwan Province because of her concern for “human rights.” The Chinese Revolution is one of the greatest triumphs of human rights.

In 1959, the People’s Liberation Army abolished serfdom in Tibet. Nancy Pelosi likes to be seen with that former serf owner known as the Dalai Lama.

What’s more of a human right than the right to live? When Mao Zedong declared “China has stood up” on Oct. 1, 1949, and the People’s Republic of China was born, Chinese people lived to be on average just 36 years old.

By 2022 life expectancy had more than doubled to reach 77.3 years. That’s a longer lifespan than in the capitalist United States.

Capitalist mouthpieces like The Economist, Bloomberg BusinessWeek, and The Wall Street Journal have attacked the People’s Republic for its public health measures against the COVID-19 pandemic.

Despite China having over four times the population of the United States, the U.S. death toll from the coronavirus is 70 times as large. As of Aug. 1, there have been 1,026,937 deaths from COVID-19 in the U.S. compared to 14,735 deaths in the People’s Republic. (With 9,506 of those deaths occurring in Hong Kong.)

The real attitude of Speaker Pelosi towards human rights can be seen in her trip six months ago to “Israel,” which is really occupied Palestine.

Pelosi didn’t visit Gaza, which is the world’s largest ghetto. Instead, she declared that U.S. support for the Israeli apartheid regime was “ironclad.”

Pelosi’s father was mayor when 24 people were arrested on July 11, 1948, for playing on the all-white tennis courts in Baltimore’s Druid Hill park. White and Black tennis players, as well as their supporters, were jailed for defying segregation laws.

H.L. Mencken ― who had suggested to Clarence Darrow to put William Jennings Bryan on the stand during the Scopes “Monkey Trial” ― denounced these Jim Crow arrests in his last newspaper column. Many of the brave activists were supporters of the Communist Party and the Progressive Party, whose presidential candidate Henry Wallace was denouncing the Cold War.

One of the many humiliations suffered by Black people in Baltimore when Pelosi’s father and brother were mayors was when it snowed. While the all-Black Flag House projects remained covered in snow, the streets were swiftly cleaned next door in all-white Little Italy.

The city officials claimed they had no responsibility to plow the driveways of a public housing project, which the Flag Houses were. The 14th amendment right to equal protection didn’t exist in Baltimore, Charm City.

“On the night of the election, I saw D’Alesandro at Schaefer’s campaign headquarters. I was now writing a column for the Baltimore Sun.

“’How did the vote go in Little Italy?’ I asked.

“’Schaefer won, 487 to 1,’ D’Alesandro said. One vote for Murphy in the entire community?

Nancy Pelosi was silent about her father’s threat to the anti-racist who cast their vote for a Black candidate. While Pelosi was not yet a member of congress, she had already been chair of the California Democratic Party.

Nancy Pelosi wasn’t a fellow freedom fighter. She was 23 years old and missing in action when hundreds of people were arrested on July 4, 1963, so Black children could attend Gwynn Oak amusement park just outside of Baltimore.

Nancy Pelosi’s San Francisco is the most gentrified major city in the United States. The median household income in her 12th congressional district is $120,000. Many poor and working people can’t afford to live there.

It’s these billionaires that Pelosi represents when she denounces the People’s Republic of China. Not the 8,000 homeless people living in San Francisco, including 4,000 human beings who live on its streets.

Nancy Pelosi’s own fortune has been estimated to be $135 million.

Speaker Pelosi is also representing the reactionary forces who oppose the Chinese Revolution. Just as Miami is a center for Cuban counter-revolutionaries, so San Francisco is one of the centers of those who hate the People’s Republic of China.

It’s the social conditions of California ― with 161,000 homeless people and 205,000 people locked-up in jails and prisons ― and the exploitation it represents that Speaker Nancy Pelosi wants to bring to China.

Taiwan was stolen from China by the Japanese Empire in 1895. Three years later the United States occupied the Philippines and killed a million Filipinos.

The People’s Republic of China will recover Taiwan sooner than later. Nancy Pelosi’s dangerous trip needs to be rejected by poor and working people.