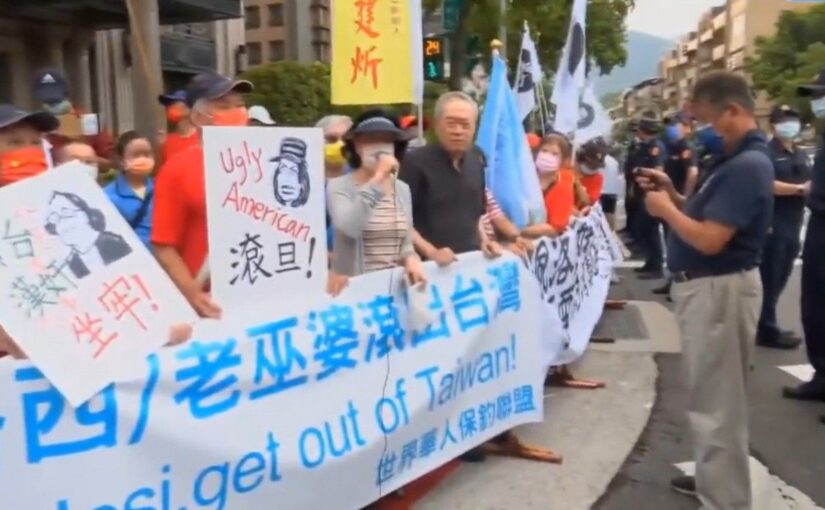 Noting the Chinese warning that those who play with fire will get burned, the CPC(ML) points out:

The fact is that the U.S. has already been burned, as the peoples at home and abroad have witnessed one failure after the other of the current U.S. president’s foreign relations and increasingly see the U.S. government wracked in disagreements and unable to hold its ranks in check. Repeatedly resorting to more violence and wars of destruction will not provide humanity or the U.S. a way out of the crisis caused by its striving for world hegemony. Certainly, having witnessed the U.S. defeat in Afghanistan few consider the U.S. could succeed against China.

The top leader of the U.S. House of Representatives, Speaker Nancy Pelosi, decided to visit Taiwan, which is Chinese territory. She did so without securing the permission of Chinese authorities and against clearly stated Chinese objections. This hooligan behaviour is paraded as being necessary to uphold a rules-based international order, despite the fact that it destroys all norms of international relations between countries and of international diplomacy.

It is yet another U.S. provocation against China, which in recent months have included sailing U.S. ships through the Taiwan Straight which are strategic waters between China and Taiwan, holding war games in the vicinity, issuing threats of sanctions if China in any way supports Russia and so forth. Four U.S. warships, including the USS Ronald Reagan are now standing by. U.S. fighter jets, along with those of Taiwan, are flying above Taiwan, further increasing tensions and bringing Chinese jets into the area. All of this has the complicity of Canada.

Biden has said more than once that he would come to Taiwan’s aid militarily if China were to attempt to forcefully reunify the country. He has not reversed measures taken by former President Trump which lifted U.S. government rules prohibiting interactions between U.S. diplomats and their Taiwanese counterparts. Such interactions are contrary to recognition of the Chinese government as the government of China, including Taiwan, and respecting international relations between sovereign countries.

While making these threats and provocations, Biden claims he is upholding agreements with China, in place since the 1970s, to not interfere in Chinese affairs, especially on the question of the One-China policy, to not maintain diplomatic relations with Taiwan, to not aid Taiwan militarily (except by providing weapons), and to not support those forces in Taiwan calling for independence.

China in return agreed to peacefully reunify the country over a period of time, a position it has upheld to date. The entire spectre of forceful reunification and scenario of China attacking Taiwan is a U.S. narrative and falsification to cause trouble. The reality that Taiwan is Chinese territory is also evident in the fact that China, not Taiwan, is seated at the United Nations and a member of its Security Council. While the U.S. press repeatedly claims Taiwan is not Chinese territory, this disinformation is meant to divert from repeated U.S. provocative actions while blaming China for “over-reacting.”

The incoherence of the Biden Administration is such that while making threats to intervene militarily, Biden says he is upholding the One-China policy. As well, while previously saying a trip by Pelosi to Taiwan was a bad idea, now his administration has now tried to claim that Pelosi made her own decision and he could not stop her. At the same time a military jet was provided for the trip, something only Biden could have authorized.

Biden is also saying that Congress and the President are separate and “co-equal” partners. Given that Congress is dysfunctional and power is increasingly concentrated in the executive, such a claim carries little weight. There is a division of labour, but it is well known that is the executive which is in command. Further, Pelosi has no standing or authority to conduct trade and foreign affairs, so that is not the purpose of her trip. She is acting to up the ante on U.S. provocations to see how China responds.

A main difficulty the U.S. has is that it can no longer predict how other countries will respond, nor how the peoples will respond. It cannot do so because the mechanisms used to make predictions in the past, including information provided by spy agencies, are no longer reliable because they have been taken over by narrow private interests which serve conflicting interests. Widespread disinformation is used to divide and depoliticize the people and this also in fact serves the undermine the ability of the rulers to predict how the peoples will respond. In such conditions, repeated provocations and testing the waters is necessary. At the same time, the arrogance of the U.S. is such that the rulers do not listen, as is evident with Pelosi’s visit to Taiwan.

Chinese Foreign Ministry spokesperson Zhao Lijian on August 1 repeated what the Chinese have said in the past. “If you play with fire, you will get burned. I believe the U.S. is fully aware of the strong and clear message delivered by China.” As to how China might respond to the visit, he said, “Let’s wait and see.” It is a measured response given Pelosi’s arrogance and disrespect and Biden’s efforts to pretend he is not responsible.

The fact is that the U.S. has already been burned, as the peoples at home and abroad have witnessed one failure after the other of the current U.S. president’s foreign relations and increasingly see the U.S. government wracked in disagreements and unable to hold its ranks in check. Repeatedly resorting to more violence and wars of destruction will not provide humanity or the U.S. a way out of the crisis caused by its striving for world hegemony. Certainly, having witnessed the U.S. defeat in Afghanistan few consider the U.S. could succeed against China.

Pelosi is claiming the trip is to show allies “the U.S. stands with you.” She has also visited Japan, Malaysia, Singapore and south Korea as part of trying to show U.S. influence in the region. She said she wants Congress “to be part of the Biden administration’s strategy in the Indo-Pacific.” The delegation includes the heads of the House Foreign Affairs and Armed Services Committees, to try and give it standing when it has none in terms of authority to conduct trade and foreign affairs.

The appearance is given that Pelosi is picking a fight with Biden and acting independently of the president. Given her reliance on a military jet however, this is hardly the case. More likely the appearance of independence is given so Biden has “plausible deniability,” to claim he is not the one behind the trip. As well, Pelosi is being used to give the impression that the U.S. is powerful enough to stand up to China militarily, something even the Pentagon denies.

Countries in the region have raised their concerns. Pelosi began her Asian tour in Singapore, where Singapore Prime Minister Lee Hsien Loong, in talks with Pelosi, “highlighted the importance of stable U.S.-China relations for regional peace and security.” This was echoed by Japanese Foreign Minister Yoshimasa Hayashi in Tokyo, who said stable ties between the two powers “are extremely important for the international community.” Philippine officials said, “It is important for the U.S. and China to ensure continuing communication to avoid any miscalculation and further escalation of tensions.”

The many failed U.S. efforts to impose its hegemony — whether against Russia and now China, or other countries like Cuba, Venezuela, the Democratic People’s Republic of Korea, Iran and more — have further exposed the fact that the U.S. state is unravelling and is unable to resolve any problems, at home or abroad. In its desperation and incoherence, it is lashing out, attempting and failing to use its police powers to control the world. That which it cannot control the U.S. will act with impunity to destroy which is what poses a grave danger to the peoples of the world, who are building their resistance and demanding their rights as the urgent necessity of the times.