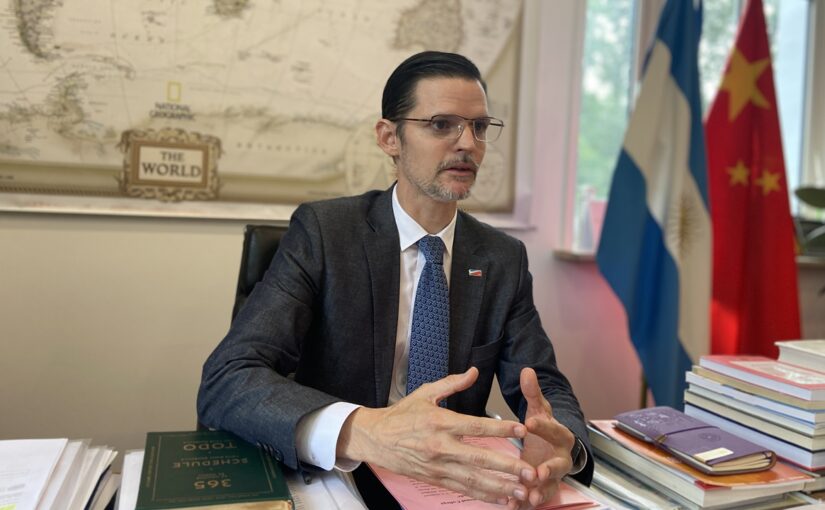 In this fascinating interview with Global Times, Argentina’s Ambassador to China, Sabino Vaca Narvaja, reflects on the extraordinary progress made by the Chinese people since the establishment of the People’s Republic. Vaca Narvaja talks about hearing the song Without the Communist Party, there would be no new China during the centenary celebrations of the CPC in July 2021. The lyrics captured his attention “because they explain why China has made such unprecedented achievements in human history, and why China has changed from a feudal society to an advanced country.”

Vaca Narvaja notes that he spent his childhood in Cuba and had the opportunity to experience socialism first-hand, which immunized him from the prevailing anti-communist ideology in the West. He calls on people in the West to drop the “end of history” narrative, to reject Cold War propaganda, and to make an effort to study and understand China.

“‘Without the Communist Party, there would be no new China.’ These lyrics succinctly capture the fundamental reason why China has achieved unprecedented progress in human history,” Argentine Ambassador to China, Sabino Vaca Narvaja told the Global Times in an exclusive interview.

The Ambassador said one thing that impressed him the most in China was the moment when he heard the song “Without the Communist Party, There Would Be No New China” at Tiananmen Square one early morning at a ceremony marking the centenary of the founding of the CPC in 2021, because the lyrics also expressed his true feelings. Narvaja said he was impressed by China’s admirable economic, technological, and social development particularly in relation to people’s livelihoods over the last decade, especially in its efforts to reduce poverty and address the inequities brought about by development.

Narvaja told the Global Times that before coming to China, he had noticed that many Chinese immigrants in Latin America gave themselves a Spanish name to facilitate communication with the locals, which he believed is a friendly move. Therefore, after coming to China as ambassador, he decided to take a Chinese name to express his goodwill to China. So, the name “Wangdao” occurred to him.

He revealed that he chose this name for two reasons. First, it was from the name of Chen Wangdao – the first person who translated The Communist Manifesto into Chinese. “I am very interested in how China integrates its own theories with Marxism, which is what you call the ‘Sinicization of Marxism.'”

The Argentine diplomat recalled that Chen Wangdao played an important role and has historical significance in China and for the CPC. Chen and other young people at that time launched an ideological debate, thus creating the prelude to a major change in China.

Additionally, “dao” is also the abbreviation of “Taoism” in Chinese traditional culture. In Narvaja’s view, “Wangdao” also has the meaning of “focusing on the road underfoot,” which also coincides with his interest in exploring the developmental paths of various countries.

Narvaja was born in Cuba where he spent his childhood before returning to Argentina after finishing primary school. What he saw and heard in his childhood made him a person not easily deceived by Western countries’ demonization and false propaganda formulated against socialist countries.

His interest in communism, which was “ignited” by Cuba, further grew in the research and exploration of China, because in his opinion, China is one of the most successful socialist countries. After returning to Argentina, he studied a lot of courses related to China ranging from China’s national conditions and economy to China’s development model. He even studied China in graduate school.

“Long before I came to China as an ambassador, I had started researching this eastern country. I’m particularly interested in how the country has made such marvelous achievements in such a short period of time, especially since the CPC came to power in China.” He told the Global Times that he has published many academic works on China’s development, the latest of which is on the Belt and Road Initiative (BRI).

Narvaja became the Argentine Ambassador to China in April 2021. In just a little more than a year since his arrival, he has traveled to more than 20 provinces in China and said that he was “deeply impressed” by the diversity and rapid development of China, which has also helped him accumulate rich firsthand information for his exploration and research on China.

“I used to study the BRI, but now I have become a participant in promoting Argentina’s participation in the BRI. It was very exciting for me because I could see my ideas slowly become reality,” he said.

“Under the leadership of the CPC, China’s economic and social development in the last decade has been admirable,” the ambassador noted to the Global Times, when talking about his experience of visiting various places in China.

He stressed that China’s development and change have been remarkable over the last decade under the leadership of Xi Jinping, especially in the field of science and technology. “China has been at the forefront of the world in electronic communications, 5G, and other fields. The aircraft carriers development has made breakthroughs, and it has also made breakthroughs in the field of aviation.”Among the series of changes in China, the diplomat particularly appreciated China’s effort in poverty alleviation. “It is an extremely positive thing to lift hundreds of millions of people out of absolute poverty, which is not only of great significance to China, but also a major contribution to the world,” he said.

In his view, this showed that China began to solve the problem of imbalanced development after a period of rapid development, through means such as making use of the development of the eastern coastal areas to drive the prosperity of the relatively underdeveloped western region of the country.

“I see the great determination of the Chinese government and President Xi to reduce inequality and address the imbalance of development. Development always brings about the gap between the rich and the poor, but China is working very hard to solve it. This is very meaningful work,” he said.

Narvaja told the Global Times that he has had many memorable experiences during his time as an ambassador in China, but the most memorable was hearing the lyrics “Without the Communist Party, there would be no new China” in July 2021.

“I was in Tiananmen Square on July 1, 2021, while participating in a ceremony marking the centenary of the founding of the CPC. I remember that morning, there were chants of ‘without the Communist Party, there would be no new China’ all over the square. This song strongly grabbed my attention,” the Argentine diplomat recalled.

“I especially like this line of lyrics, because it explains why China has made such unprecedented achievements in human history, and why China has changed from a feudal society to an advanced country.”

These lyrics have since often echoed in Narvaja’s mind. In February, Argentine President Alberto Fernandez was invited to visit China. After the meeting between President Xi and President Fernandez, Narvaja, who listened to the conversations between the two leaders on China’s development and cooperation, once again thought of the lyrics “Without the Communist Party, there would be no new China.”

“I have met President Xi a few times before, and I think he is a very kind, enthusiastic, and knowledgeable person. So I couldn’t help but read the lyrics to him, ‘Without the Communist Party, there would be no new China.’ He smiled at me very happily. I was also very happy because I expressed my truest feelings,” Narvaja recalled to the Global Times with a smile.