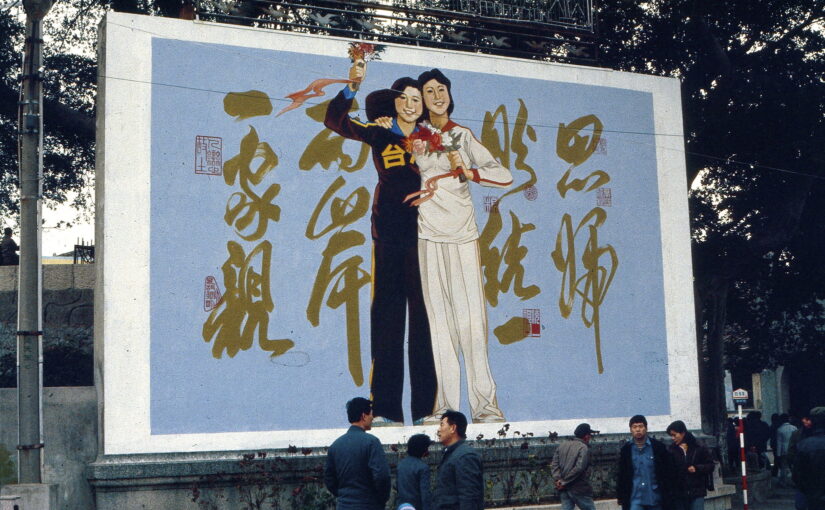 We are pleased to republish the below article by Brendan Devlin, which was originally carried by the Canadian publication Passage.

Brendan sets out some vital contemporary and historical facts with regard to the Taiwan situation as a necessary corrective at a time when the corporate media essentially serve to uncritically amplify the US-led narrative. He shows how China’s 1842 defeat in the first Opium War, waged by British imperialism, set the scene for Japan’s seizure of Taiwan in 1895 and that any idea of partitioning China was solely an imperialist project, as, for example, enunciated by Winston Churchill in 1902, and continues:

Thus, in 1949, there was no split between Taiwan and China. Instead, there were two governments claiming to be the sole legitimate government of all of China. One was based in Beijing and controlled the whole of mainland China, while the other was based in Taipei and controlled Taiwan and a few other small islands. Both governments espoused the One China principle, which holds that there’s only one China and that Taiwan is part of it.”

Brendan explains that the separatist elements that have emerged in Taiwanese politics since the 1990s have throughout been deeply connected to US imperialist strategy, with the US arming and training military forces on the island, regularly sailing warships through the Taiwan Strait, and President Biden openly contradicting his own government’s ostensible policy on several occasions.

United States House of Representatives Speaker Nancy Pelosi’s trip to Taiwan earlier this month received extensive media coverage across the globe. In North American media, this coverage was framed by self-interested distortions about the history of China and Taiwan.

Most articles briefly explained that China claims Taiwan as its own territory, and then moved on without any further explanation. Some added that Taiwan will “be annexed by force if necessary,” that China opposes visits by foreign governments and/or that China considers relations with Taiwan as an internal matter of sovereignty. Certain articles also briefly and selectively quoted Chinese officials to bolster the above points.

Meanwhile, many articles uncritically included claims that Taiwan is a sovereign country. When discussing China’s response to Pelosi’s visit, an Associated Press (AP) article published at the CBC wrote simply that “Taiwan decried the actions, saying they violate the island’s sovereignty.” The article also quoted the President of Taiwan, Tsai Ing-Wen, saying: “We will firmly uphold our nation’s sovereignty and continue to hold the line of defence for democracy.” Both this article and another one from AP published at Global News quoted an official from Taiwan’s Defence Ministry saying the Chinese response to the visit “equals to sealing off Taiwan by air and sea, such an act severely violates our country’s territorial sovereignty.”

Thus, readers are told that China claims Taiwan as its own territory but that many officials in Taiwan claim to be a sovereign nation. These conflicting messages come with little to no historical context. Instead, these articles frame the China-Taiwan relationship in a way that raises several unanswered questions, such as: Why does China claim Taiwan? What’s the history behind this claim? Why are there competing claims over Taiwan’s sovereignty? Why is China willing to go to such lengths to enforce its claims?

In order to answer these questions that journalists seem uninterested in addressing, we first need to get a better understanding of Chinese history.

China And Taiwan: Some Historical Context

This history starts with China’s defeat in the First Opium War in 1842. This marked the beginning of the Century of Humiliation, which, as Michael Zhou writes in the South China Morning Post, consisted of “military defeats, unequal treaties, territorial concessions and social unrest, which roused feelings of humiliation, shame and anger.” During this era, China went from a premier global power to one of the poorest countries in the world, as imperialist forces competed to carve it up into their own spheres of influence, including the British taking Hong Kong.

In 1895 following China’s defeat in the First Sino-Japanese war, Japan took Taiwan as a colony, holding it until its defeat in the Second World War. In 1902, future Prime Minister of the United Kingdom Winston Churchill captured the mood of many imperialists at the time, stating: “I believe in the ultimate partition of China — I mean ultimate.”

The Century of Humiliation brought about the end of China’s Qing Dynasty, and the Republic of China (ROC) was formed in its place in 1912. The ROC was controlled by the Nationalist Party, the Kuomintang (KMT), which began fighting a civil war against the Communist Party of China (CPC) in 1927. Throughout the civil war, there were also periods of uneasy cooperation between the two sides, such as in 1937 when Japan began another invasion of China, marking the beginning of China’s part in the Second World War.

Following Japan’s defeat in 1945, the civil war between the CPC and the KMT resumed in full force. The KMT retained control of the ROC, but the CPC had come to hold significant swathes of territory. In 1949, the CPC won the civil war, and the People’s Republic of China (PRC) was founded. This marked the end of China’s Century of Humiliation.

At that point, as accurately noted in a Reuters article published in The Globe and Mail, “[KMT leader] Chiang Kai-shek’s defeated Republic of China government fled to Taiwan.” Several media articles published in Canadian outlets erroneously claimed that China and Taiwan split after this incident, giving the impression that the KMT established an independent state in Taiwan.

This isn’t the case, as the KMT didn’t secede from the mainland or create its own state. Instead, the KMT continued insisting they were still in control of the sole legitimate government of China: the ROC. They vowed to retake the mainland from the CPC, and received assistance from the U.S. to hold onto the land they had.

Both governments espoused the One China principle, which holds that there’s only one China and that Taiwan is part of it. This forced countries around the world to choose between recognizing and establishing formal diplomatic relations with either the PRC or the ROC. Neither the PRC nor the ROC would establish diplomatic relations with a country that recognized the other.

Initially, most of the world opted to recognize the ROC as the legitimate government of China. The tides began shifting in the 1960s when France became the first major Western power to establish diplomatic relations with the PRC. Canada followed in 1970, and China’s seat at the United Nations switched to being held by the PRC in 1971. The U.S. finally recognized the PRC in 1979. Every country that established relations with the PRC had to break formal ties with the ROC and agree to respect the One China policy.

After decades of maintaining a One China policy and helping to isolate the PRC from the world, some ROC governments began unofficially claiming in the 1990s that Taiwan was already an independent country. In 1999, for example, ROC President Lee Teng-hui claimed that the PRC had never held the territory under his government’s control and that the ROC was already sovereign, so there was therefore no need for Taiwan to declare independence. Lee’s KMT government never gave a clear, coherent explanation of this statement or its deviation from years of policy, but clarified it wasn’t a declaration of independence.

Subsequent governments in Taiwan have oscillated between rhetorically claiming the ROC is already independent and maintaining that Taiwan is a part of China. The current government, led by Tsai Ing-Wen of the Democratic Progressive Party, strongly supports the position that Taiwan is already independent as the ROC. However, no ROC government has ever formally declared that Taiwan is an independent, sovereign state, and it hasn’t been recognized as such by other states. Rather, a mere 14 states — Vatican City, Tuvalu, Saint Vincent and the Grenadines, Saint Lucia, Saint Kitts and Nevis, Paraguay, Palau, Nauru, Marshall Islands, Honduras, Haiti, Guatemala, Eswatini, Belize — have recognized the ROC as the legitimate government of China.

So, to summarize this section: 1) the PRC’s position on Taiwan has been clear, consistent, and known to all since 1949: there’s only one China and Taiwan is a province of China that will be reunified with the mainland; 2) every government that has established relations with China has agreed to adhere to the One China policy; 3) Taiwan has never formally declared independence from China.

With all of this in mind, it’s inaccurate to claim that China has been split since 1949.

Even with this historical overview, some may still wonder: Why is China’s claim to Taiwan so important that it’s willing to risk war? Simply put, this isn’t just about history, and Taiwan’s status has serious, present-day implications for China and its population due to United States-led imperialism.

The U.S. currently has China surrounded with military bases. In China’s worst-case scenario, Taiwan could secede and then once again be used to host U.S. military bases, as was the case until 1979. These concerns have been heightened given the U.S.’s rabid anti-China turn over the past several years, as well as its long history of destabilizing and overthrowing governments big and small around the world. Taiwan’s status in relation to the One China policy is the only thing currently ensuring the U.S. can’t place a military base there again.

Beyond being a military asset, Taiwan is the global centre of production of computer chips, making it crucial for global supply chains and the production of electronics by U.S. companies. While in Taiwan, Pelosi had a meeting with the chairman of the Taiwan Semiconductor Manufacturing Corporation. The visit coincides with American efforts to convince the company to set up a manufacturing base in the U.S. and to stop making advanced chips for Chinese companies. (There was no mention of this in any of the articles I’ve previously mentioned.)

The U.S. has long considered a reunified China to be a threat to its interests in the region. In 1950, U.S. Army General Douglas MacArthur famously warned that Taiwan in the hands of the CPC was like an “unsinkable aircraft carrier” that could “checkmate counteroffensive operations by United States Forces based on Okinawa and the Philippines.” Even today, such a key American geopolitical and economic asset as Taiwan coming under the control of Beijing would be a nightmare scenario for the U.S.

Accordingly, the U.S. has been carefully setting the stage for violent conflict over Taiwan in a few ways.

In this already dangerous situation, U.S. President Joe Biden has been publicly contradicting the government’s policy of strategic ambiguity, whereby the U.S. is intentionally vague about whether it would intervene militarily on Taiwan’s behalf if the mainland uses force to achieve reunification.

In August and October 2021, Biden vowed the U.S. would intervene, but then the White House quickly clarified that this (somehow) didn’t mean there was a change in policy. Biden said the same in May, only for the White House to immediately walk it back once again. These sorts of statements have created an atmosphere of confusion as the U.S. works to further militarize the region, which increases the risk of inciting a regional military conflict that could escalate into a world-threatening one between nuclear powers.

The stakes of the conflict between the U.S. and China over Taiwan are hard to overstate. As corporate media uncritically amplifies the U.S.-led narrative on Taiwan, the public must be equipped with knowledge of the historical and present-day context necessary to push for peace in the Taiwan Strait.