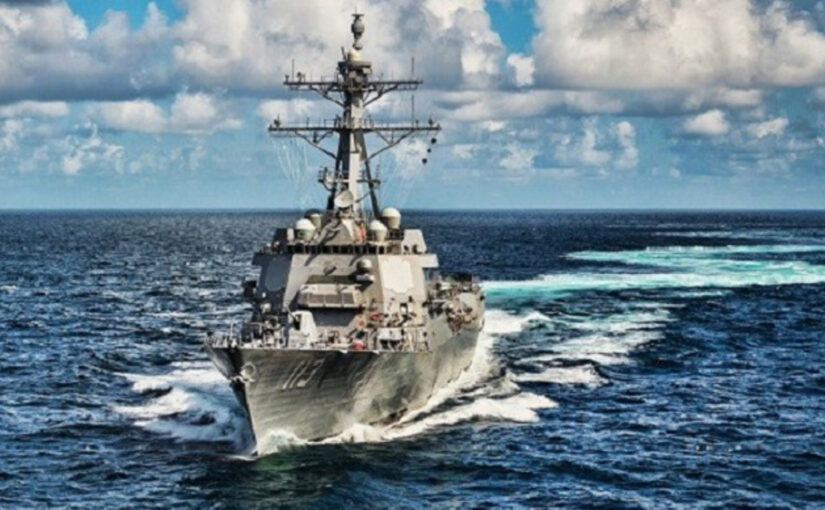 This insightful article by Sara Flounders, originally published in Workers World, exposes the incredible hypocrisy shown by the ‘free’ media – giving non-stop coverage to China’s allegedly aggressive response to Nancy Pelosi’s Taiwan visit whilst studiously ignoring the RIMPAC maneuvers being carried out at the same time by the US naval command.

Sara notes that the US maintains a constant military presence in the region, and connects this back to the imperialist domination of China, starting with the First Opium War nearly 200 years ago. Just as the Opium Wars were fought to impose British imperial hegemony, so is the current escalation in the Pacific region being carried out in order to impose US imperial hegemony. The difference being that, following the establishment of the People’s Republic of China in 1949, the CPC-led government has been able to “rebuild a strong, united China which is increasingly able to defend its coastal waters and resist US imperialist demands.”

The author points out that the US is conducting a “desperate imperialist strategy to reverse its declining global position”, and is wreaking havoc in the process. Progressive and pro-peace forces worldwide must join hands against this menace.

Consider what is being said, as well as what is totally omitted, in the U.S. coverage of China’s naval action around Taiwan.

The U.S. naval command RIMPAC (Rim of the Pacific Amphibious Assault Training) was carrying out maneuvers involving 170 aircraft, 38 ships, four submarines, and 25,000 military personnel from all the G7 imperialist countries. Some 19 other Asia Pacific countries were pulled in for symbolic participation. RIMPAC is the world’s largest international maritime exercise.

This aggressive maritime action took place from June 29 to Aug. 4. In other words, it was going on as Speaker of the House Nancy Pelosi was visiting Taiwan.

The shaping of information is all pervasive. Whether it is FOX News, CNN, AP, the New York Times or the Washington Post, the multibillion-dollar media are part of and totally intertwined with U.S. military industries. They collaborate in hiding U.S. war plans and provocations.

The role of the corporate media in totally distorting the news on China must be challenged.

The media coverage of China’s military drills around Taiwan never describe them as self-defense. The media display absolute unity, blocking any mention of China’s right to safeguard its national sovereignty and territorial integrity.

Every statement or action taken by China is relentlessly described as “threatening,” “provocative” or “expansionist.” The same words are used again and again in news articles and politicians’ statements.

There is only one accepted political line. The media repeat that China is irrational, paranoid, belligerent, menacing and overreacting.

U.S. actions, even military maneuvers in which thousands of troops employ jet bombers and aircraft carriers, are described as “routine rotations” or normal schedules – that is, If the mainstream media report on them at all.

This is so relentless that it impacts even social forces who oppose U.S. militarism and endless U.S. wars.

RIMPAC is planned and coordinated by the U.S. Navy’s Third Fleet. According to its commander, their massive training is meant to deter escalation by China’s military.

Only part of the Third Fleet is engaged in RIMPAC. The fleet’s total size comes to a combat-ready force of more than 68,000 people, 100 ships and 400 aircraft.

Moving into place as Pelosi visited Taiwan was the even larger U.S. Navy Seventh Fleet, the largest of its forward-deployed fleets. At any given time, it amounts to 50 to 70 ships and submarines, 150 aircraft, and more than 27,000 sailors and Marines.

The Seventh Fleet is led by the USS Ronald Reagan, accompanied by guided-missile destroyers, nuclear submarines and jet aircraft. This ship has now been joined by aircraft carrier battle groups of the USS Nimitz and USS Theodore Roosevelt.

It is comparable to a scenario in which Chinese destroyers were to sail into the Gulf of Mexico, off the coast of New Orleans and Houston.

Isn’t this aggressive and threatening? Yet this vast and deadly armada is hidden in plain sight. It is barely mentioned, but even when hundreds of ships and aircraft are involved, they are described as simply participating in “routine” or “business as usual” exercises.

These continuing assaults are not top news, but they are reported in military news media, such as the Navy Times.

When the guided-missile destroyer USS Benfold conducted its third transit through the South China Sea in a week, the Chinese government was prompted to label the move as a provocation. (tinyurl.com/bdfsm7pa)

The U.S. Navy’s Seventh Fleet has so far this year sent an average of one guided-missile destroyer per month through the Taiwan Strait as a challenge to China. (tinyurl.com/7zhn9t87)

China’s long-held position is that “the two sides of the Taiwan Strait belong to one China and should work together to seek national reunification.”

The Taiwan Strait is part of the South China Sea, and China has claimed the area as its territorial waters. However, the United States has consistently said that it considers the strait to be international waters.

Few people in the U.S. are aware of the fact that, more than a century ago, the U.S. Navy sent fleets of armored ships to patrol Chinese rivers and coastal waters.

Special fleets of gunboats of the U.S. Navy and Marines patrolled Chinese rivers up to 1,000 miles inland. They were there to enforce U.S. trade interests and suppress uprisings. Armies of occupation from the U.S., Britain, France, Germany and Japan were stationed in Chinese cities.

“Concessions” were forced on China by brutal gunboat diplomacy and enshrined by onerous unequal treaties that made China pay imperialist countries huge indemnities and grant such “concessions” as control of its cities, major ports and largest waterways.

Britain, with U.S. and French participation, fought two Opium Wars in China to enforce its “right” to sell opium. The merchants called this “defending free trade” and “protecting freedom of navigation.”

It was the 1949 victory of the Chinese Communist Party that finally ended these “Freedom of Navigation” invasions into China’s mainland, opening the opportunity to rebuild a strong, united China which is increasingly able to defend its coastal waters and resist U.S. imperialist demands.

The corrupt and defeated former military forces, defending the rights of the old landlord class, withdrew, with U.S. Navy protection, to the island province of Taiwan. This was hardly a democratic process. It was a totally militarized U.S. occupation of the island.

China has held a consistent, well-understood position on its sovereignty and territorial integrity that is recognized internationally in all world bodies. China has repeatedly asserted its right to resolve this unfinished national reunification.

Washington is openly violating three different signed agreements – Joint Communiques it made with China in 1972, 1979 and 1982 – affirming that China is one country and Taiwan is a province of China.

Any focus on these signed agreements of “One China” in the Western media today would expose that the U.S. has broken its promises not to interrupt China’s efforts to reunify the island peacefully.

Once in a while the truth slips in. Roger Waters, co-founder of Pink Floyd, an English rock band formed in London in 1965, is now on a final U.S. tour titled: “This is not a drill.”  In an interview with CNN on August 7, Waters refuted the narrative about Taiwan.

When CNN host Michael Smerconish said in the interview that “China is too busy encircling Taiwan,” Waters immediately said, “They’re not encircling Taiwan, Taiwan is part of China, and that’s been absolutely accepted by the whole of the international community since 1948.” Smerconish tried to interrupt Waters, saying that China is “on the top of the list of human rights offenders.” Waters immediately shot back: “The Chinese didn’t go to Iraq and kill 1 million people in 2003.”

The U.S. corporate media are united in hostility to China. At the same time, different media can favor either a Democratic or Republican presidency.

For example, Fox News, guilty of a daily barrage of racist stereotypes against China, was at the forefront of exposing Nancy Pelosi’s husband, Paul Pelosi, for his multimillion-dollar insider stock trading in a semiconductor firm just before Congress voted to give $52 billion to chip manufacturers in the U.S., called the CHIPS Act.

Despite this scandal and her role as Speaker of the House of Representatives, Nancy Pelosi met with the chairman of the Taiwan Semiconductor Manufacturing Company (TSMC), the world’s largest semiconductor manufacturer and a beneficiary of the U.S. legislation.

TSMC plans to build a $12-billion chip factory in the U.S. The semiconductor industry is a priority for the U.S. “containment” of China. At the same time, the U.S. government is using various sanctions to suppress Chinese high-tech companies and break chip supply chains away from China.

Wang Peng, a research fellow at the Beijing Academy of Social Sciences, explained:

“The U.S. is using the CHIPS Act to force companies in countries and regions of key status on the global chip supply and industrial chains to play by U.S. rules, as well as encircling and suppressing chip industries in emerging markets,”

The bill’s requirement is for companies to pick only one of two choices: business ties with China, or subsidies from the U.S. government.

The problem U.S. imperialists face is how to force countries in the region to act against their own economic interests.

In order to force high-tech companies to decouple from the People’s Republic of China, U.S. imperialism needs a political/military crisis with China. Every U.S. plan for sanctions on China starts with a manufactured crisis over Taiwan.

U.S. imperialism’s strategy of restructuring and distorting the global economy to serve its own short-term interests of maximizing immediate profits has led to an aggressive U.S. expansion of NATO and provocations in Ukraine.

The immediate threat to U.S. hegemony was the EU trade with Russia of $260 billion a year — 10 times its trade with the U.S. The EU has also been the largest investor in Russia. Breaking this growing economic integration of the EU with Russia, and at an even greater level with China, serves the long-term strategic interests of U.S. corporate domination that have been in place since World War II.

In 2021 China’s GDP was roughly 10 times larger than Russia’s. China is the world’s top trading economy and the number-one exporter of manufactured goods. It is in an increasingly strong position to resist U.S. demands.

The desperate imperialist strategy to reverse the declining global position of the U.S. will be far more disruptive to the global economy.

This information on U.S. provocations must be dragged into the daylight by all the forces determined to prevent another imperialist war.

The role of the U.S. corporate media is to make imperialist threats seem palatable and entirely reasonable. This is possible only by blocking all past history of U.S. wars while using racism to smear and demonize China’s legitimate, reasonable and lawful responses and countermeasures,

Taiwanese rapper and anti-imperialist commentator Zhong Xiangyu explains: “The U.S. government has never been a protector of Taiwan. The U.S. Navy was the first country to attack Taiwan with a warship in 1867. The U.S. Navy supported Japan in invading Taiwan in 1874. The U.S. government sold weapons to Japan during the Sino-Japanese War, leading to China’s defeat and forcing China to cede Taiwan to Japan in 1895.

One thought on “US media hide military threats against China”