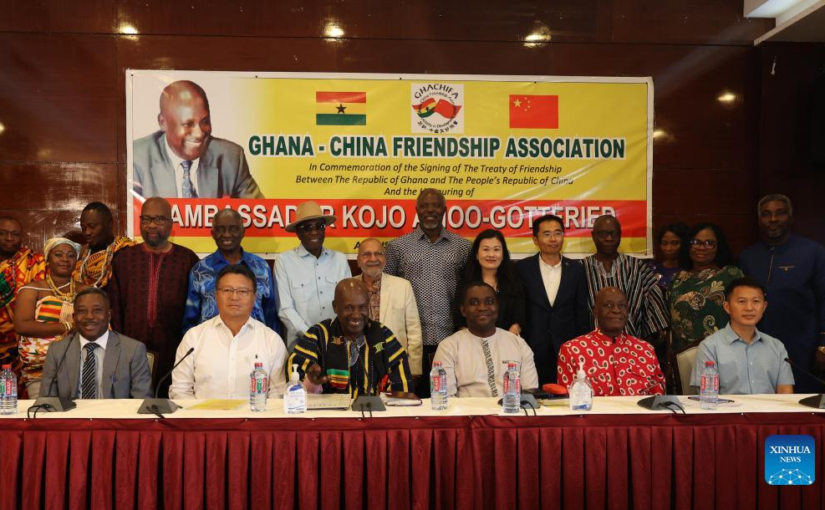 We are pleased to reproduce this short piece from the Xinhua News Agency regarding the celebration organised last week in Accra by the Ghana China Friendship Association (GHACHIFA), marking the 61st anniversary of the Treaty of Friendship between China and Ghana. Joined by Ghana’s Chinese community, GHACHIFA also took this occasion to honour their founder Kojo Amoo-Gottfried.

Amoo-Gottfried founded GHACHIFA in 2000, when he retired from the diplomatic service and returned home from his posting as Ambassador to China. A lifelong friend of China, he was, as a schoolboy, inspired by the victory of the Chinese revolution in 1949. He first visited China, representing the West African Students Union (WASU), in 1959, for the tenth anniversary of the founding of the People’s Republic. On that occasion he was received by Chairman Mao Zedong and he has maintained close friendships with successive generations of Chinese leaders since then, as well as with many other leading revolutionaries and statespeople worldwide, notably Malcolm X, Ho Chi Minh and Fidel Castro. He was among the many tens of thousands in Beijing’s Workers’ Stadium to witness the 1962 signing of the Friendship Treaty by Presidents Liu Shaoqi and Kwame Nkrumah. When the progressive government of Jerry Rawlings came to power, Kojo served successively as his country’s Ambassador to Cuba (and concurrently to many regional countries including revolutionary Nicaragua and Grenada), to the United Nations in Geneva and finally in China (and concurrently to the DPRK, Vietnam and Cambodia).

Kojo Amoo Gottfried is a member of the Friends of Socialist China advisory group and a much-loved friend and comrade.

The Chinese community and their Ghanaian counterparts late Thursday celebrated the 61st anniversary of the Treaty of Friendship between China and Ghana.

The celebration, organized by the Ghana-China Friendship Association (GHACHIFA), was also used to honor Ghana’s first ambassador to China and founder of GHACHIFA Kojo Amoo-Gottfried.

Chinese ambassador to Ghana Lu Kun said in his keynote message that the relations between the two countries have grown rapidly, with China providing development assistance to Ghana as Ghana continued to support China on the global stage.

Lu lauded the role of GHACHIFA in deepening the time-honored friendship and fostering genuine and dynamic people-to-people diplomacy and cultural relations between the two countries.

“Long distance separates no bosom friends. Even though China and Ghana are geographically far apart, our longstanding friendship, rooted in shared historical experiences and practical cooperation, has stood the test of time and will surely keep flourishing in the years ahead,” added the Chinese ambassador.

McArios Akanbeanab Akanbong, the director of the Legal and Treaties Bureau of Ghana’s Foreign Ministry, said China is a dependable friend of Ghana. “And because we want to go far, we will continue to walk with China,” he said.

During the celebration, GHACHIFA presented a citation to Amoo-Gottfried for establishing the association in 2000 and his contributions to the friendly relations between China and Ghana.