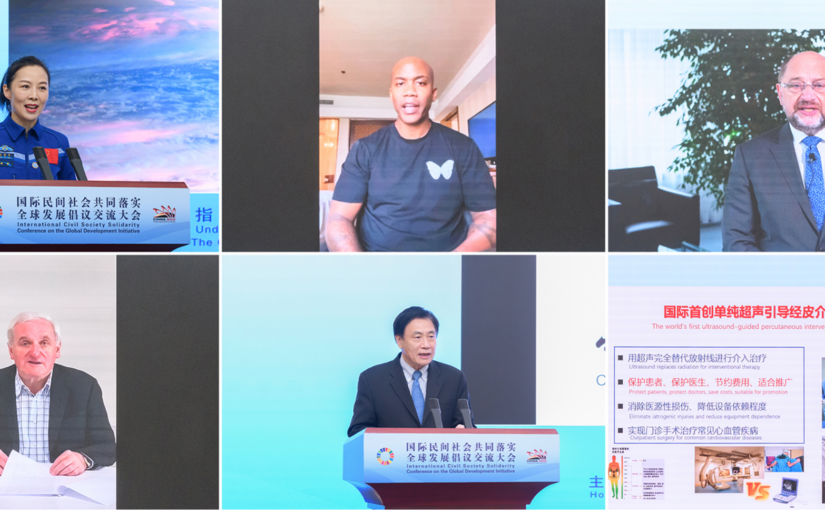 On August 12, some 400 people from around the world attended an online and offline meeting organized by the China NGO Network for International Exchanges, with the guidance of the International Department of the Communist Party of China, and on the theme, ‘International Civil Society Solidarity Conference on the Global Development Initiative’.

The Global Development Initiative (GDI) was advanced by Chinese President Xi Jinping in his September 2021 address to the annual session of the United Nations General Assembly, and the conference was focused on helping to implement the UN’s 2030 Agenda for Sustainable Development.

The meeting opened with the reading of a message of greetings from President Xi, in which he said that China is ready to join hands with all so as to contribute more to building a community with a shared future for humanity and to usher in a new era featuring prosperity and development.

His message was followed by a keynote report from CPC International Department Minister Liu Jianchao and contributions from a number of heads of state or government.

Pakistan Prime Minister and President of the Pakistan Muslim League – Nawaz, Shehbaz Sharif, welcomed the GDI as another visionary development following the Belt and Road Initiative (BRI), of which the China Pakistan Economic Corridor (CPEC) is a flagship project. In the course of promoting global development, China has provided valuable help and support to developing countries. China’s own unprecedented achievements in economic, social, and industrial development have encouraged the vast number of developing countries. China has successfully lifted 800 million out of poverty in just a few decades, leaving a deep impression on the world. Stressing the strong and durable relations between his country and China, Sharif said that Pakistan, as the 2022 Chair of the Group of 77 Plus China, was ready to play its part in pushing for global development.

Faure Gnassingbé, President of Togo and Chairman of the Union for the Republic, said that the great initiative of President Xi effectively responded to the urgent need of all countries in the world, especially the developing countries, to accelerate post-epidemic economic recovery and realise the UN’s 2030 Agenda for Sustainable Development. Praising China for its unremitting efforts to “leave no country behind”, he added that the country had just won its battle against extreme poverty at an unprecedented and amazing speed, and the valuable experience accumulated by China in this process will be of benefit to human society.

Roosevelt Skerrit, Prime Minister of the Commonwealth of Dominica and Leader of the Dominica Labour Party, praised the long-standing friendly relations between the governments and peoples of Dominica and China, and said that the Global Development Initiative proposed by General Secretary Xi Jinping is highly consistent with the concept of a community with a shared future for humanity, and will inject new and strong impetus into the implementation of the United Nations 2030 Agenda for Sustainable Development. The GDI provides small states with an important way to promote development, benefiting small island developing countries such as Dominica in a number of areas, such as poverty reduction, food security, financing for development, climate change, the digital economy and connectivity. As an important cooperation platform provided by China to the world, the GDI will certainly receive extensive support from the international community.

Skerrit said Dominica thanked General Secretary Xi Jinping for his commitment to increase the capital of the South-South Cooperation Assistance Fund by US$1 billion and to integrate and upgrade the fund into a Global Development and South-South Cooperation Fund. He particularly expressed thanks to China for its support to the Caribbean region, not least during the pandemic. China has played an important leading role in promoting the equal distribution of vaccines and the global supply of public goods. China has also been vigorously supporting the Caribbean region in addressing climate change, enhancing regional climate change response capabilities, and helping regional disaster relief and post-disaster reconstruction.

Skerrit called on all people to unite to deepen multilateral cooperation and jointly build a new era of balanced, coordinated and inclusive global development. Dominica is willing to actively respond to the appeal made by General Secretary Xi Jinping to all countries in the world, work with partners to promote global development and security, work together to translate global development initiatives into practical actions, ensure that no country is left behind, and contribute to building a fairer, more sustainable, and safer world.

Bertie Ahern, former Taoiseach (Prime Minister) of Ireland, from the Fianna Fáil party, and Co-Chairman of the InterAction Council, noted China’s commitment to advancing the 2030 Agenda for Sustainable Development and expressed his hope that China will work closely with international civil society, so as to make greater contributions to promoting global development.

The following two reports were first published on the websites of the Xinhua News Agency and the CPC International Department respectively.

Xi, also general secretary of the Communist Party of China Central Committee, made the remarks in a congratulatory letter on Friday to the International Civil Society Solidarity Conference on the Global Development Initiative.

Xi noted that the global economy is now affected by multiple factors, and the implementation of the United Nations 2030 Agenda for Sustainable Development has been impeded.

In face of difficulties and challenges, Xi said only when all sides pull together with firm confidence to combat COVID-19, promote development with concerted efforts, and earnestly implement the 2030 Agenda, can people of all countries live a better life and human society embrace a brighter future.

“I believe the international civil societies will help consolidate and enhance popular support for ensuring the implementation of the Global Development Initiative,” Xi added.

China is ready to join hands with all sides to facilitate the 2030 Agenda to contribute more to building a community with a shared future for humanity and usher in a new era featuring prosperity and development, Xi said.

On August 12, 2022, the International Civil Society Solidarity Conference on the Global Development Initiative was held by China NGO Network for International Exchanges both online and offline under the guidance of the International Department of the CPC Central Committee (IDCPC). Xi Jinping, General Secretary of the CPC Central Committee and President of China, sent a congratulatory letter to the conference. The theme of the conference is “building a global development community together to help implement the 2030 Agenda for Sustainable Development”. Faure Gnassingbé, Chairman of the Union for the Republic and President of Togo, Shahbaz Sharif, President of the PML-N Pakistan (Pakistan Muslim League-Nawaz Sharif) and Prime Minister of Pakistan, and Roosevelt Skerrit, Prime Minister of the Commonwealth of Dominica and Leader of the Dominica Labour Party, congratulated on the opening of the conference in written form or via video link. About 400 representatives attended the conference, including Bertie Ahern, former Prime Minister of Ireland and Co-Chairman of the InterAction Council, Martin Schulz, former President of the European Parliament and Chairman of Friedrich-Ebert-Stiftung (FES), Ban Ki-moon, former Secretary-General of the United Nations, diplomatic envoys from relevant countries to China, and representatives from NGOs, think tanks and enterprises in China.

Liu noted, after the innovation and breakthroughs in theory and practice since the 18th CPC National Congress, the CPC has successfully promoted and expanded the distinctively Chinese path to modernization. General Secretary Xi Jinping pointed out that Chinese-style modernization is socialist modernization led by the CPC, which is characterized by a large population, common prosperity for all Chinese people, coordination between material and spiritual civilization, harmonious coexistence between human being and nature, and peaceful development. The CPC insists on relying on our own efforts to drive the nation’s development and hold the fate of China’s development and progress firmly in our own hands. China’s success offers a new choice to the countries around the world longing to accelerate their development while maintaining their independence. We are ready to work with the international civil society to support all countries in stepping up exchanges and mutual learning and exploring development paths suited to their national realities.

The foreign participants spoke highly of the Global Development Initiative proposed by General Secretary Xi Jinping, believing that it is in line with the concept of a community with a shared future for mankind put forward by General Secretary Xi Jinping. Against the backdrop of such challenges as the COVID-19 pandemic, climate change and geopolitical conflicts, the initiative is a powerful response to the urgent need for all countries, particularly developing countries, to accelerate economic recovery in the post-pandemic era, as well as a vivid embodiment on China’s solemn commitment that no country is left behind in this process, and will accelerate the implementation of UN 2030 Agenda for Sustainable Development. China’s feat of successfully eradicating absolute poverty has provided significant confidence and valuable experience for the rest of the world to promote development. The international civil society is ready to respond actively to the Global Development Initiative, help the international community strengthen solidarity and cooperation, actively translate the Initiative into concrete actions, make good use of the public goods and cooperation platforms provided by the initiative, and push the early realization of the goals set by the UN 2030 Agenda for Sustainable Development.

Chen Zhou, Vice-minister of the IDCPC, presided over the conference. Xu Jianguo, Secretary General of the China Foundation for Peace and Development, delivered a speech at the conference. Wang Yaping, an astronaut from Astronaut Center of China, attended the conference as a specially invited representative and made a statement.