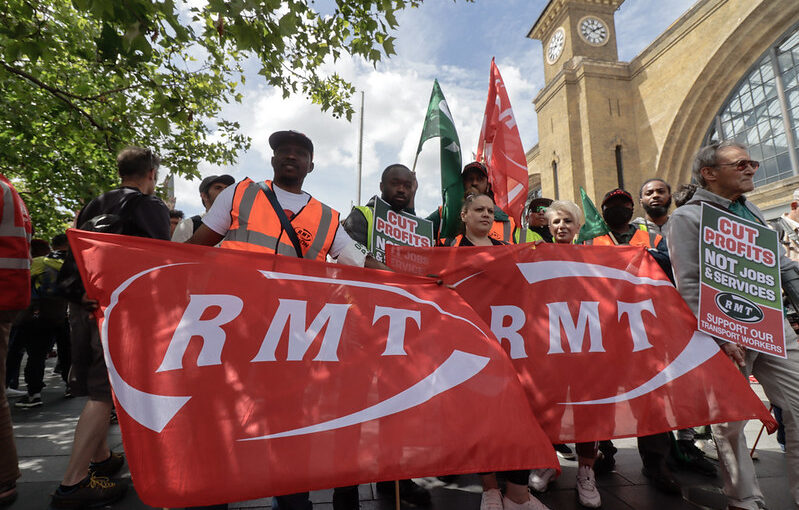 Recently, the National Union of Rail, Maritime and Transport Workers (RMT), and its General Secretary Mick Lynch, have captured the imagination and support of a huge number of people in Britain with their ongoing industrial action for a pay rise in line with the surging rate of inflation, for no compulsory redundancies, and against changes to working conditions, that would not only be to the detriment of the rail workers, but also not simply inconvenience but endanger the safety of members of the public, particularly from among the most vulnerable members of society. The RMT has a fine record as a class struggle trade union, which has not hesitated not only to take militant action in defence of its members, but also to take progressive stands on major issues of domestic and international politics. It has, for example, long been a strong and active supporter of socialist Cuba.

In this context, it is extremely significant that, at its Annual General Meeting (AGM), held in Birmingham in July, the RMT voted to affiliate to the Stop the War Coalition and passed a resolution entitled Peace is Union Business. The resolution draws attention to the bellicose stands taken by NATO at its Madrid Summit in late June and notes its increased attention to the Global South, US President Biden’s further military build up in Europe, and British Prime Minister Johnson’s announcement of increased military spending at a time when wages are being held below the rate of inflation and energy prices are soaring.

The resolution then notes that these moves follow last September’s conclusion of the AUKUS pact between the governments of Australia, the United Kingdom and the United States, noting how the sister Maritime Union of Australia (MUA) had drawn attention to the way AUKUS will impact on the dumping of nuclear waste on First Nations land, increase the likelihood of nuclear proliferation and the threat of nuclear war.

The resolution then states very clearly: “Workers have no interest in war with China, Russia, or any other country. Every effort should be made to pursue peaceful relations between countries through negotiations and disarmament.”

The stand taken by the RMT is in the best traditions of the British working class movement, from the East London dockers, who in 1920 refused to load munitions onto the ‘Jolly George’ as they were to be used against the fledgling Soviet workers state, to the Rolls Royce workers in Scotland, who in 1974 refused to load air force jet engines that were to be sent back to the murderous Pinochet regime in Chile following repair, a struggle depicted in the 2018 documentary ‘Nae Pasaran’.

The text of the RMT Resolution, which we reproduce below, was originally carried on the website of the Stop the War Coalition.

“That this AGM notes with grave concern the NATO summit meeting in Madrid (28-30 June 2022) confirmed an escalation of military spending, troop build-ups and further expansion of this nuclear-armed bloc with a seemingly endless supply of money poured into weapons development and procurement including:

• expanding NATO’s role at the request of the Spanish government to include the global south, including control over migration from sub-Saharan Africa and the Sahel region (north Africa) following the tragic deaths last week of 23 African migrants entering Melilla, Spain’s colonial enclave in north Africa;

• US President Biden’s announcement that the US would establish a permanent
military base in Poland, a brigade in Romania, air missile systems in Italy and Germany and two additional F-35 squadrons based in the UK;

• British PM, Johnson’s announcement on 30 June 2022, that UK defence spending will increase from 2.3% of GDP in 2022 to 2.5% of GDP in 2030 when wages are being held below inflation with taxes and energy prices rocketing contributing to a cost-of- living crisis.

These latest announcements of military escalation follow the announcement in September 2021 by the governments of Australia, the UK and US of the so-called AUKUS pact, which provides nuclear-powered submarines to Australia as part of a military alliance with the US and UK.

RMT’s sister union, the Maritime Union of Australia (MUA) has warned these submarines use highly enriched uranium ideal for nuclear weapons. The Australian government has repeatedly tried to set up nuclear waste dumps on First Nations land. This will intensify that pressure. The AUKUS pact also contributes significantly to the likelihood of nuclear proliferation and the threat of nuclear war.

Workers have no interest in war with China, Russia, or any other country. Every effort should be made to pursue peaceful relations between countries through negotiations and disarmament.

RMT stands in solidarity with trade unionists and workers in all countries opposing war and wasteful, environmentally harmful, military spending. We pledge our opposition to development of nuclear submarines in Australia, to NATO expansion and to Boris Johnson’s disastrous pledge to further increase military spending by the UK government instead of addressing growing poverty, homelessness and hunger in Britain.”