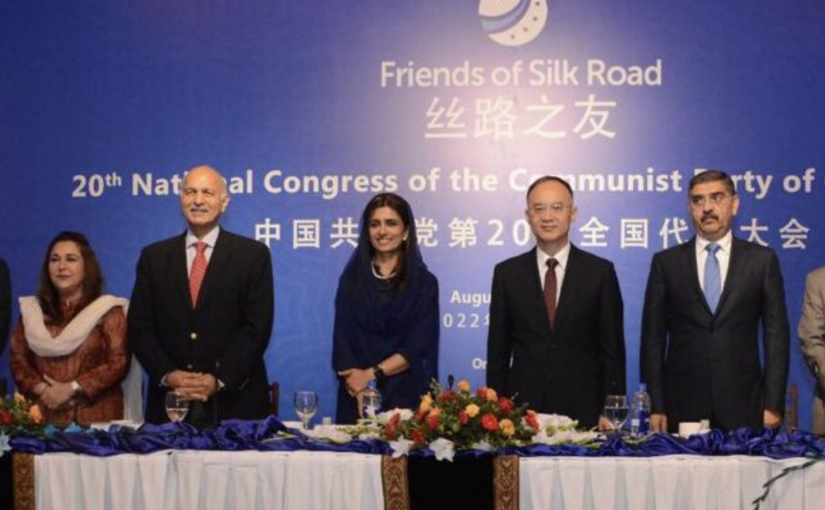 Our good friends in the Pakistan China Institute organised a special event in connection with the upcoming 20th National Congress of the Communist Party of China, under their Friends of Silk Road programme, on August 29.

Naturally the terrible floods that have ravaged Pakistan in recent days were in the minds of all participants, and Senator Hussain Sayed thanked China for its prompt donations of tents and cash, while Ambassador Nong Rong said that his country would not abandon Pakistan in such testing times. He also recalled how Pakistan had always supported China at such moments. For example, following the terrible Wenchuan earthquake in 2008, Pakistan had donated its entire available stock of tents to China.

The Secretary-General of the Pakistan People’s Party (PPP) stressed the importance of learning from China’s experience in fighting terrorism and alleviating poverty. He expressed fears that the US might use a resurgence of militancy to foment terrorism against both Pakistan and China.

Senator Kakar of the Balochistan Awami Party praised China’s whole process people’s democracy, which goes far beyond the rhetoric deployed at election times by political parties in the model of western democracy, only to then leave their voters in the lurch and with unresolved problems once the election is over.

Senator Dr. Zarqa Suharwardy Taimur  of the PTI praised the China Pakistan Economic Corridor (CPEC), which, she said, contributes 1-2% to Pakistan’s annual economic growth and has so far created around 80,000 jobs for Pakistanis.

Pakistan is currently experiencing a period of intense and even bitter domestic political dispute. However, it was noteworthy that leading representatives of both government and opposition parties participated in the seminar. As the Chief Guest, Minister of State Hina Rabbani Khar stressed in her closing remarks, China is the country that unites Pakistan, “that brings all of Pakistan together.”

The below report was carried by the newspaper Pakistan Today.

Pakistan-China Institute organised a special event for the upcoming 20th National Congress of the Communist Party of China under its flagship ‘Friends of Silk Road’ initiative.

The panelists discussed the prospects of the 20th National Congress of the Communist Party of China (CPC), which will be held later in 2022. This congress is held every five years, where China watchers look for clues to the country’s future. President Xi Jinping is expected to be re-elected for his third term as Secretary General of CPC and President of China. Moreover, the Party Congress will set key priorities for the next five years, in particular, as well as China’s two-stage development plan for the middle of the twenty-first century.

The content of the documentary reflected the on-ground realities in China & aspirations of Chinese people who regard President Xi Jinping as the ‘core leader’ of the Communist Party of China, who, through his people-centered approach to governance and development has proven to be the worthy successor to Chairman Mao and Deng Xiaoping.

Mustafa Hyder Sayed, Executive Director Pakistan-China Institute, introduced the Friends of Silk Road Initiative which has become the premier platform to understand China, bridge people-to-people connectivity between Pakistan and China, serving as a platform to gather political leaders, students, media professionals, and think tanks to brainstorm new ideas of thought which both countries can further cement their relationship in various fields.

In his opening remarks, Senator Mushahid Hussain Sayed, Chairman of Senate Committee on Defence & Pakistan-China Institute, thanked China for donating 25000 tents and cash for flood victims. He said that the core message emanating from President Xi Jinping’s leadership is people-centric development and human security. He said that the Global Development Initiative (GDI), introduced by President Xi Jinping on September 21, 2021, promotes inclusive and open collaboration & is a crucial platform for international cooperation and the public good that China offers.

Similarly, this year, President Xi Jinping announced the Global Security Initiative (GSI), which, as President Xi Jinping, said is meant to ‘uphold the principle of indivisible security, build a balanced, effective and sustainable security architecture, and oppose the building of national security based on insecurity in other countries’.

Commenting on the Belt and Road Initiative (BRI) launched by President Xi Jinping in 2013, he termed it the most important developmental and diplomatic initiative of the 21st century, terming China as a leader in Climate Change and Globalization. He also dismissed the notion of a ‘New Cold War, ‘ advocated implicitly by some hawkish quarters, and said the region could not afford another cold war since it would destabilize the whole region needlessly.

He also lauded President Xi Jinping for achieving the goal of making China a moderately prosperous society by eradicating absolute poverty in China in 2021. Commenting on the 20th Congress of the Communist Party of China, he hoped this would be a landmark conference that would set policy directions for China, Asia, and the whole region. Lastly, he wished the 20th CPC Congress great success.

Nong Rong, Ambassador of China to Pakistan, expressed China’s sympathies to Pakistan in lieu of ongoing flooding in the country and said China wouldn’t leave Pakistan in such testing times. Pakistan, he said, has always supported China in such situations. He recalled how Pakistan donated all the available stock of tents to China in the 2008 earthquake.

Commenting on NPC, he said it is the most important political agenda of this year-end. CPEC, he said, has transformed Pakistan’s socio-economic landscape by overhauling infrastructure and alleviating the energy crisis. Ambassador Nong Rong termed Pakistan-China relations as ‘rock-solid’.

Senator Farhat Ullah Babar, Secretary General Pakistan People’s Party (PPP), said that the 20th party Congress would be a game changer for China and the region since it will decide the future course of policy for China. It is also expected to provide an opportunity for President Xi Jinping to secure a third term as president of China.

Moreover, he hoped to learn from China’s experience fighting terrorism and alleviating poverty. He was also concerned about ‘resurgence of militancy in Afghanistan and Pakistan’ and expressed his fears that ‘US may use these militants for terrorism against Pakistan and China’.

Senator Anwaar-ul-Haq Kakar said that the whole process of people’s democracy goes far beyond the rhetoric by political parties in the model of western democracy for getting votes and subsequently leaving their voters in a lurch in facing unresolved problems. The whole-process democracy, he said, entails incorporating crucial components of genuine inclusion and participation, such as elections, decision-making, management, and supervision, into a structure that truly empowers people and puts them in control.

The success of this novel kind of democratic system has been demonstrated by Chinese experience. Moreover, he said that the whole-process people’s democracy in China serves the people and democracy can’t be defined by geographical boundaries.

In her closing remarks, Hina Rabbani Khar, Minister of State for Foreign Affairs, said that China is the country that unites Pakistan, ‘that brings all of Pakistan together’. No government has ever tried to change China’s position as the cornerstone of Pakistan’s foreign policy.

The event was attended by nearly 200 guests from the media, think tanks, academia, civil society and Parliament.