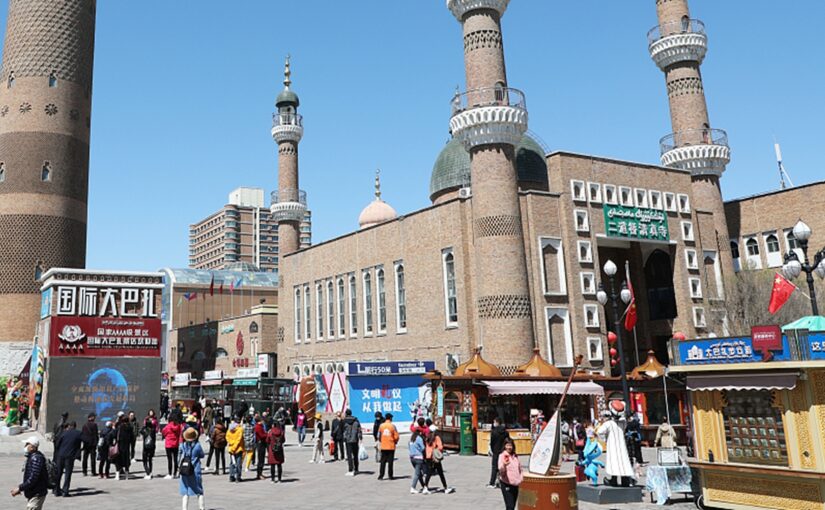 Just three months ago, UN Human Rights Commissioner Michelle Bachelet was subjected to relentless criticism in the West when, having visited Xinjiang, she failed to find evidence supporting the hysterical slander about a genocide against Uyghur Muslims. It is very unfortunate that she has, just hours before the end of her tenure, succumbed to US pressure and released a deeply flawed report which relies on a handful of submissions from dubious sources, and which contains insinuations rather than substantive charges.

Ministry of Foreign Affairs spokesperson Wang Wenbin described the report well, as “a patchwork of disinformation that serves as a political tool for the US and some Western forces to use Xinjiang to contain China.” Wang noted that 60 countries have sent letters to the UN High Commissioner opposing the release of the report. “They are the mainstream of the international community”.

We reproduce below an article from the Global Times summing up the Chinese response to the Office of the High Commissioner for Human Rights.

China on Thursday denounced a so-called UN human rights report on China’s Xinjiang region as completely invalid and a political tool serving the US and some Western forces to contain China, and said that it proved the Office of the High Commissioner for Human Rights (OHCHR) has descended into the accomplice of the US and some Western forces against developing countries.

In response to the so-called “assessment of human rights concerns” in China’s Xinjiang released by the OHCHR on Wednesday, Chinese Foreign Ministry Spokesperson Wang Wenbin told a press conference on Thursday that the so-called assessment is a patchwork of disinformation and a political tool serving the US and some Western forces to contain China by using the Xinjiang topic.

Such a “report” seriously violates the mandate of the OHCHR, infringing on the non-political and objective principles. It once again proved that the OHCHR has descended into an enforcer and accomplice of the US and some Western forces against the developing countries, Wang Wenbin said.

Analysts also pointed out that the “assessment” is neither objective nor professional and it is totally made to cater for the anti-China forces’ needs to further hype the topics on China’s Xinjiang region.

The report downplays how badly the Xinjiang region had suffered from terrorism and extremism – this is unfair and cannot fully represent the situation in the region. Any government in the world should take responsibility in fighting against terrorism to protect local residents, Wang Jiang, an expert at the Institute of China’s Borderland Studies at Zhejiang Normal University, told the Global Times.

Moreover, the “report” was based on testimony from 40 interviewees. Wang Jiang said that such a small number is not enough to be used as samples to jump to a serious conclusion against a country on human rights, and the identities of these interviewees remain questionable given the previous false accusations made by so-called victims.

China’s Foreign Ministry and Xinjiang regional government had exposed many liars who frequently appeared on Western media as “victims” from Xinjiang region. The US-backed World Uyghur Congress and other anti-China forces have also been found to be busy fabricating sensational stories of so-called victims which were later found to be self-contradictory and full of holes.

Wang Jiang also pointed out the words “likely” or “highly likely” or “may” were frequently used in the “assessment.” Such dubious language is not appropriate for a report by a UN organization to accuse a sovereign country, and it should also know that Western media will turn “highly likely” into “certainly” in their reports, and have actually done so.

Without solid surveys, such a “report” made by the OHCHR is highly irresponsible, analysts said, noting that it is also another vivid example of how the office has been manipulated by the US and the some Western forces to attack other countries.

Foreign diplomats and visitors who visited the Xinjiang region also pointed out that the real Xinjiang is opposite to what the Western media have described. More than 60 countries also send letters to the UN High Commissioner to oppose the release of the fake report, Wang Wenbin said.

Wang Wenbin also noted that nearly 100 countries, including many Muslim countries, also voiced their support to China on its position on the Xinjiang affairs, opposing to use the topic of Xinjiang region to interfere with China’s internal affairs – this is the mainstream of the international community, and the vicious political scheme by the US and some Western forces to contain China by using the Xinjiang topic is doomed to fail.