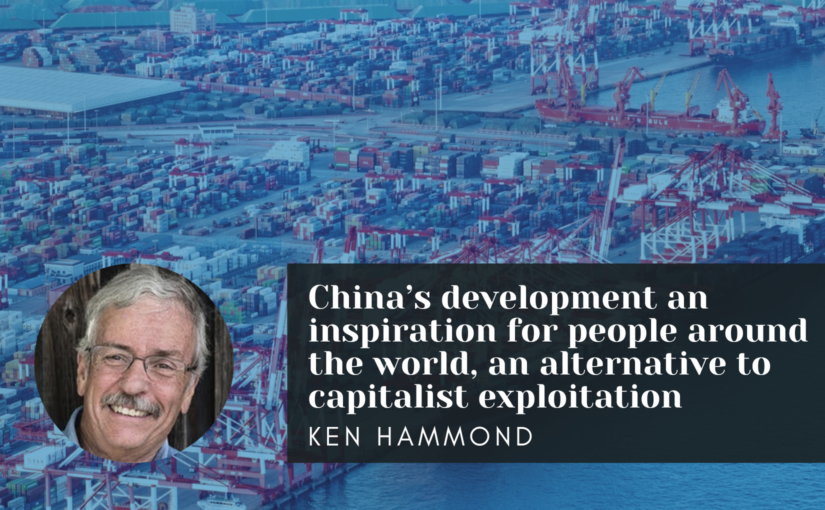 Reproduced below is an important interview with Ken Hammond, professor of East Asian history at the New Mexico State University, originally published in the Global Times. Ken provides a concise and valuable description of Socialism with Chinese Characteristics, outlining China’s political trajectory in recent decades, including some of the problems and contradictions emerging from its extraordinary development.

Ken highlights the key themes of the last decade – “The lifting of hundreds of millions of people out of absolute poverty, the ongoing work to suppress corruption and promote a socialist ethical order, the vital struggle to solve environmental problems and address the global concern of climate change, and the program of outreach to other developing countries and people around the world through the BRI and other initiatives” – and discusses how China’s successes have prompted a dangerous and negative response from the US.

Beyond China’s economic rise, Professor Hammond also notes that China’s socialist nature and Marxist orientation constitute a particularly acute challenge to Western ideological hegemony. “Socialism as an alternative to capitalism is seen as a threat, although in fact it offers the only path to social and economic justice, and indeed to saving the planet from ecological catastrophe.”

Hammond: I see China as working to develop a system of political economy with public, social ownership and control of the basic economic resources of the country, a socialist system in which the wealth produced by working people is distributed based upon the contribution they make through their labor. China is not yet at the point of having reached this, but this is the goal toward which the Party and the government and the people are working. To reach this objective China has chosen to utilize market mechanisms to pursue the rapid development of the economy, raise the overall level of production both in terms of quantity and quality, and enhance the material conditions of life for the people. Great successes have been achieved in these areas.

The process of development, especially with the use of markets, has also generated contradictions and challenges which China has to face, including corruption, increased inequality, and environmental stresses such as pollution and the rising dangers of climate change. These contradictions are recognized and acknowledged, and China is making serious efforts to address them. This, too, is an ongoing process, and the outcome is not predetermined. This is why the leadership of the Party is so critical, to ensure that the original mission of the revolution, the creation of a just, equitable, socialist society, with the eventual goal of a communist system, remains the guiding vision and the practical program.

GT: In the past 10 years, which policy or practice initiated by the CPC impressed you the most?

Hammond: The decade since Xi Jinping assumed the leadership of the Party and the presidency of the PRC has been one of dramatic changes in China. The project of development, the movement toward a system of socialism with Chinese characteristics, has begun to yield significant positive results. The lifting of hundreds of millions of people out of absolute poverty, the ongoing work to suppress corruption and promote a socialist ethical order, the vital struggle to solve environmental problems and address the global concern of climate change, and the program of outreach to other developing countries and people around the world through the BRI and other initiatives, have all achieved important advances. In conjunction with these, China has also been re-emerging as a significant participant in global affairs.

All of this has brought new challenges as well as accomplishments. Particularly in the international arena, China’s successes have been viewed by some countries, most prominently the US, as a challenge to the dominant role they have played in world affairs since World War II. This has led to a deterioration in the relationship between the major capitalist countries and China, with the US and its allies carrying on negative campaigns to try to slow or halt China’s development.

GT: You are a socialist. In your opinion, why does the West become uneasy when they talk about socialism? What do you think of the relationship between China’s rapid development and its adherence to socialism with Chinese characteristics? What influence does the development of China’s socialism with Chinese characteristics during this past decade have on the global socialist movement?

Hammond: American and other Western elites feel threatened not only by China’s performance economically, but also by the specter of socialism. As the center of global capitalism, the US has built up its wealth and power through both the exploitation of its domestic working people and through the extraction of wealth from people around the world. So long as the Western countries maintained a monopoly on modern industrial technologies of production and distribution, they could dominate the world through colonialism or neo-imperialism.

The rise of China and other modernizing countries which have escaped the web of capitalist control has been the great dynamic of the second half of the 20th century, and continues in the opening decades of the 21st. This is a deep structural reconfiguration of global economic and political life, and will continue in the decades ahead.

Capitalist elites in America and Europe fear this and react with desperate efforts to hold on to their power and privileges. America’s hostility toward China is the clearest expression of this. Socialism as an alternative to capitalism is seen as a threat, although in fact it offers the only path to social and economic justice, and indeed to saving the planet from ecological catastrophe.

GT: You wrote in another article that “In many countries, including my own, the United States, we need to work to build mass-based political parties which will be devoted to the interests of the working class.” What governance advantages do you think the CPC has as a mass-based political party? What are the difficulties of achieving this in the US, which is dominated by two-party politics?

Hammond: China and the US have fundamentally different histories and cultures. Americans tend to think that the “American Way” is the only true form of democracy, the only legitimate form of government. They see this in a very narrow way, believing that only a system of competing political parties with public participation limited to voting in elections is an acceptable system. China has a long history of its own, with a legacy of political culture based on its own forms of participation and interaction between government and society.

This heritage is rich and varied, and provides a repertoire of ways and means to produce policies and practices which serve the needs and interests of the people. This is not a perfect system, but it is one emerging from the historical struggles of the Chinese people to create a society which is just and equitable. The modern revolution of socialism and communism has been built by the Chinese people on the basis of their past and present experiences and wisdom. The CPC, with nearly 100 million members, is a dynamic instrument for the pursuit of the goals of the Chinese revolution.

This is not a simple, straightforward process. The achievement of socialism will take many more years. The leadership of the Party is critical to this, and the fact that about one of every eleven adults in China is a Party member is a clear indicator of the level of political engagement and participation in this process. This is not a system where people can only have a say in their government every two or four years. America’s two-party system also works as a kind of revolving door, where the parties alternate leadership, but neither is ever responsible for the problems they both fail to address. Electoral politics are fundamentally warped by money, as the control of information and the manipulation of public opinion are key to the power of the elites, and these are routinely bought and paid for by those with wealth and power.

GT: In the last 10 years, it is evident that China has maintained a relatively stable development momentum, while the US’ strengths have been significantly eroded and the country has faced increasing chaos and internal conflict. In your opinion, what are the reasons behind China’s rise and the US’ decline in development? Will the development gap between the two countries become wider in the future?

Hammond: The question of the future development of China and the US is at the heart of political affairs in both countries, and in the world at large. China will certainly continue to grow its economy, even while facing serious challenges from COVID and the complexities of development. The US is paralyzed by domestic political conflict, and is squandering its wealth and reputation through military adventurism around the world. The American economy is facing fundamental challenges, and is failing to meet most of them.

Political power in America remains in the hands of the capitalist elites, and they block any policies or programs which they see as threatening their position, while constantly touting slogans which claim to promote the interests of the people. But more and more people see through these lies. This is a dangerous situation, both at home and abroad. The possibility of political violence is rising in the country. And fear and desperation may drive the US to ever greater military adventures, which could blow up into conflicts that could lead to nuclear war and destruction on a scale horrible to contemplate.

China’s role as a model of development which seeks to meet the needs of its people can be an inspiration for people around the world as an alternative to capitalist exploitation. Opposition to American imperialism is critical to the survival of humanity and to the resolution of the deep contradictions afflicting the world today.

GT: Can you envision the future of China in the next few years through the changes that have taken place during the decade under Xi’s leadership?

Hammond: Based on the significant achievements of the last decade under Xi’s leadership, I would anticipate that China will continue to develop its economy, to push forward with scientific and technological research and innovation, and carry on the work of enhancing the livelihood of its people, as well as improving and expanding its international activities in aiding the development of the countries in Asia, Africa, and Latin America, and even Europe. China has set out clear goals in working to deal with climate change, and the continuation of stable leadership is essential for this. While China has achieved many things, there is still much work to be done.

One thought on “China’s development an inspiration for people around the world, an alternative to capitalist exploitation”