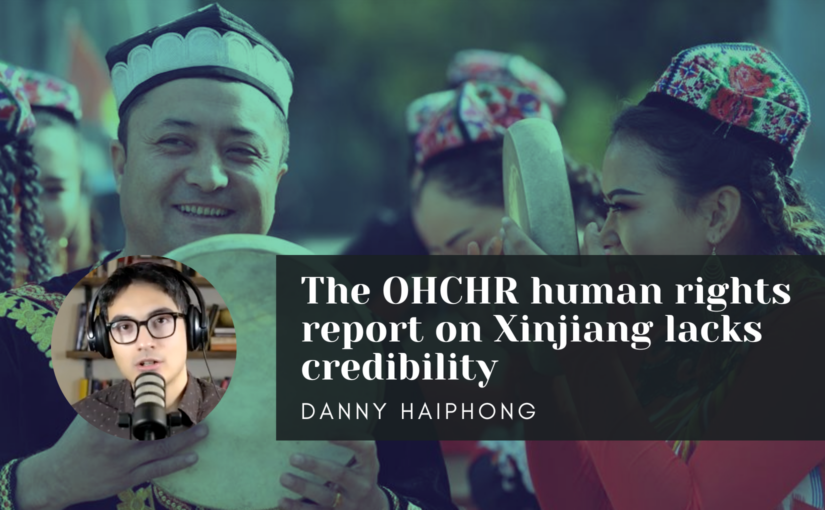 Co-editor of FoSC Danny Haiphong analyzes the latest OHCHR report on Xinjiang, highlighting its lack of credibility as research and deconstructing the anti-China propaganda that informs the report throughout. The article was first published on CGTN.

The Office of the High Commissioner of Human Rights (OHCHR) at the UN released a highly anticipated report regarding the human rights situation in China’s Xinjiang Uygur Autonomous Region. The report followed intense pressure from certain Western countries, especially the United States. It should come as no surprise that this politicized context would produce a highly incredible report that serves nothing but the political aims of the U.S.-led campaign to slander China.

The OHCHR report lacks credibility for a number of reasons. First, there is a complete absence of research protocols meant to enhance the reliability and validity of the 40 “in-depth” interviews used in the report. Direct quotations from interview participants were nowhere to be found. None of the interviews occurred on the ground in Xinjiang. Also left out of the report was any mention of the direct testimonial of dozens of diplomats from Muslim-majority nations who have visited the region and denied Western allegations of human rights abuses.

Furthermore, it is customary when using qualitative methods to acknowledge biases and shortcomings that may impact the results of the research. The OHCHR report not only lacked any acknowledgement of potential biases but was also allowed to masquerade as factual research in the Western media. However, bias in the report is not difficult to identify. The Victims of Communism Memorial Foundation (VOC) and the Australian Strategic Policy Institute (ASPI) are both cited in the report. These institutions receive funding from the United States government, with the ASPI receiving a total of $5 million from the U.S. Department of Defense in 2020 alone.

Biased sources shaped the OHCHR’s overall agenda. A tweet from ASPI’s Nathan Ruser, known for labeling Google satellite images in Xinjiang as “concentration camps,” is cited as a credible source to counter disputes from the Chinese government of the ASPI’s claims. Adrian Zenz, a “China expert” at the VOC was also given the opportunity to spread his theory that one million Uygurs have been placed in detention. The theory was cited as fact despite the wealth of evidence that has proven this number was calculated from a total of eight interviews conducted by the National Endowment for Democracy-funded Network of Chinese Human Rights Defenders (CHRD). Both Zenz and Ruser’s credentials have been connected to a far right, anti-China political campaign that went unacknowledged in the OHCHR report.

The lack of credibility of the report extends far beyond the questionable character of its sources. All of the report’s documents and interviews were transcribed using “unofficial translation” tools, indicating a complete inattention to detail and a high likelihood for manipulation. It is also clear that the sampling for the “in-depth” interviews was entirely biased. The Xinjiang Victims Database, used to gather information, is an arm of the ASPI. Furthermore, interviewees uniformly repeated claims such as being unable to visit home or change employers which have been found to be untrue or exaggerated, albeit unintentionally, by Western sources such as the BBC and Human Rights Watch.

Lastly, the OHCHR’s own conclusions represent the anti-China propaganda on Xinjiang that has spread rapidly across the West. “Genocide” was not mentioned in the report at all despite being an accusation which has been repeated ad nauseum by U.S.-led anti-China forces. The words “appear” and “allegation” are used frequently in the report. These words indicate that claims, not evidence, make up the so-called data in the OHCHR report. In fact, the report repeatedly concedes an inability to verify the claims that it published as fact.

The true purpose of the OHCHR report is to strengthen the U.S. and the West’s imperial agenda of undermining China. This agenda is suffering from a myriad of problems. The U.S.’s escalations with both Russia and China have caused a great deal of economic self-harm amid an important mid-term election season. China’s rise is peaceful and popular among its citizenry. Its expanding role in the world is viewed positively in the Global South and much of Eurasia. The OHCHR report is thus being used as a tool to satisfy geopolitical ambitions which threaten to escalate war and distract from the verifiable human rights abuses committed by China’s most impassioned accusers: the U.S. and its Western allies.