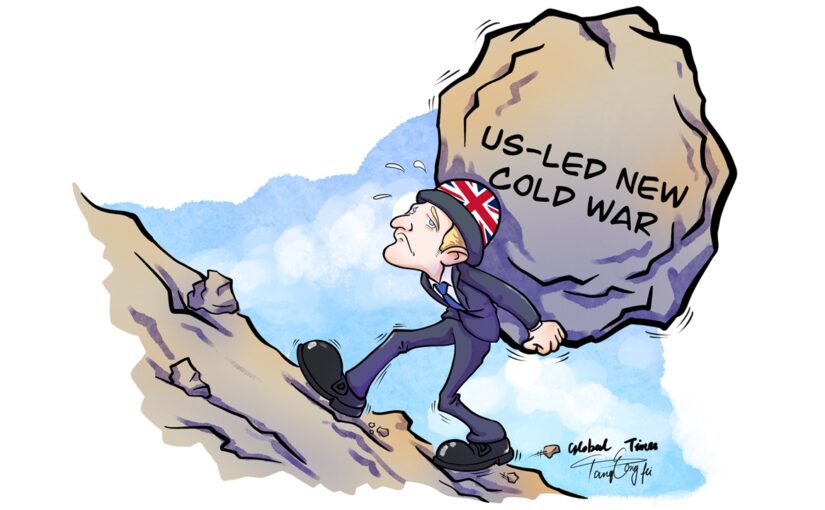 In this article for the Global Times, FoSC co-editor Carlos Martinez discusses the change of occupancy in 10 Downing Street and assesses whether Liz Truss is likely to contribute to an improvement of Britain-China relations. Noting that Truss is widely regarded as a “China hawk”, and that she has promised to classify China as a “threat to British national security” for the first time, Carlos concludes that the British ruling class has (for the foreseeable future) settled on an idiotic and self-defeating anti-China policy. This policy will bring no benefit to the British people, and is being carried out for the purpose of demonstrating loyalty to the US in its pursuit of a New Cold War.

It seems a long time ago now that George Osborne and Boris Johnson – then British chancellor and London mayor respectively – spent a week in China on a “charm offensive” to promote strong economic ties between the two countries. Announcing in October 2013 that a Chinese company would help refurbish the Port of London Authority building and that China would be working on Britain’s nuclear energy programme, Johnson commented: “If that isn’t openness to China, I don’t know what is.”

Two years later, Prime Minister David Cameron and President Xi Jinping were photographed relaxing in a pub in South Buckinghamshire, eating fish and chips, drinking pale ale and talking with locals. The mood music was all very uplifting and optimistic, and the scene was set for the development of an increasingly close, symbiotic relationship.

Of course from the British point of view, the motivation for pursuing good relations with China had very little to do with international solidarity or a hitherto-suppressed fondness for Socialism with Chinese Characteristics; rather, the impetus was naked self-interest and economic common sense. Chinese investment, markets and manufacturing prowess were – and are – tremendously important for the British business, which is why Carolyn Fairbairn, former director-general of the Confederation of British Industry, stated in 2020 that in order to protect “future British jobs and prosperity”, Britain “cannot afford to self-isolate from China.”

And yet a few years later, without any formal announcement or obvious reason, Britain’s stance has undergone a 180 degree turn. Britain was one of the first countries to succumb to US pressure to remove Huawei from its 5G infrastructure – an absurd act of economic and technological self-harm. Meanwhile the British government has regrettably added its voice to the anti-China propaganda war, imposing illegal sanctions over the fictional genocide in Xinjiang.

Britain has joined AUKUS – a transparent attempt to extend NATO to the Pacific – and sent its HMS Queen Elizabeth aircraft carrier through the Taiwan Strait. Liz Truss, then foreign secretary and now prime minister, recently compared the situation regarding Taiwan Island with the crisis of Ukraine, saying that NATO “must make sure Taiwan can defend itself.”

Ten years after the Obama administration commenced its “Pivot to Asia”, which was widely understood to constitute a major expansion of the US’s long-term campaign of containing and encircling China, Britain’s 2021 defence review announced a “tilt” towards the Asia-Pacific region. This sequencing gives some indication as to the underlying geopolitics.

Vince Cable, former Secretary of State for Business, Innovation and Skills, notes in his book ‘China: Engage!: Avoid The New Cold War’ that the so-called “Special Relationship” between Britain and the US “will always trump the Golden Era” of Britain-China relations. Cable observes that, particularly as a result of Britain’s withdrawal from the European Union and the resulting decline in Britain-EU trade, “the UK is desperate for a trade agreement with the US” and for that reason is more inclined than ever to go along with Washington’s foreign policy.

The situation is unlikely to improve with the changing of the guard in Downing Street, since the basic geopolitical dynamics have not changed. Widely considered a “China hawk”, Liz Truss has promised to classify China as a “threat to British national security” for the first time. Aside from her foolish brinkmanship regarding Taiwan, she has recently accused China of “forced technology transfer, IP violations and unfair industrial subsidies” and, with an extraordinarily ironic disregard for the history of her own country, complained about China engaging in “economic coercion and the use of economic power to achieve things”.

The level of political chaos, economic crisis and popular discontent in Britain is such that there may well be a general election in the coming months, and the Labour Party may come to power. Unfortunately, under the pro-NATO leadership of Keir Starmer, a Labour-led government can be expected to follow the current administration’s foreign policy trajectory. Lisa Nandy, then Labour’s shadow foreign secretary, called last year for “a complete audit” of the UK-China relationship, and said that it was a mistake for the Cameron government to develop such close ties. Meanwhile Labour was vocal in calling for a “political boycott” of the 2022 Beijing Winter Olympics.

China may be a convenient scapegoat for the British government, but China-bashing will not help to resolve the range of crises Britain currently faces around the rising cost of living, increasing poverty, the breakdown of public services, and a continued failure to adequately deal with the pandemic.

The New Cold War is a US project; it is aimed at consolidating and expanding US hegemony. Although it will absolutely not be successful, its essential promise is to secure the leading role of US imperialism for the next century and beyond. As such it is a project of the American ruling elite. Britain’s participation in this New Cold War is profoundly short-sighted, and will bring no benefit whatsoever to the British people or the British economy.

The British government would do well to recognise – as have the other British governments of the last four decades – that Britain can benefit a great deal from its relationship with China. It is for the population to demand, in the interests of their own wellbeing, that their political representatives pursue respectful, friendly and mutually beneficial relations with the People’s Republic of China.