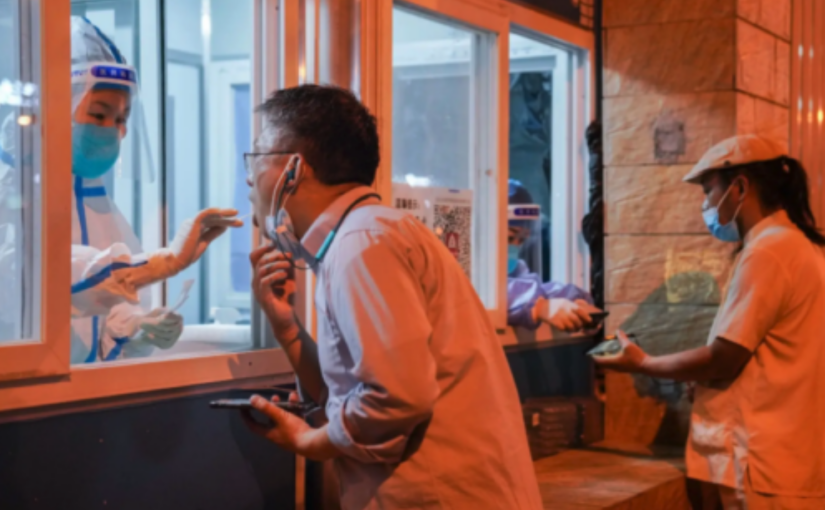 In the below article, originally published by FAIR (Fairness & Accuracy in Reporting), Jim Naureckas takes the New York Times to task for yet another of its regular attacks on China’s highly effective Zero Covid policy. He notes that if the Chinese government had followed the same policies as its US counterpart regarding the pandemic, and got the same results, then four and a half million people would have died. As China did not follow the US example, the country has experienced 15,000 deaths – the majority from a spring 2022 outbreak in Hong Kong, which has a different medical and social system to the mainland. Meanwhile, the US has suffered more than a million Covid deaths – and with a current fatality rate of around 450 per day is set to lose around 160,000 more people this year if present trends continue.

Jim notes that nowhere in the New York Times article under review is there any comparison of the respective national death tolls or any hint that the USA’s life expectancy has now dropped below that of China. And whilst the article (like many others of its type in the western media) claims that China’s determination to suppress the virus has triggered an economic crisis, the author notes that in 2020, the first year of the pandemic, China’s economy grew by 2.4% while the USA’s shrank by 3.4%. The USA’s economy is projected to grow by 1.3% this year. However, Goldman Sachs projects 3.0% growth for China.

Four and a half million people.

That’s how many Chinese people would have died from Covid-19 had its government taken the same approach to the pandemic that the United States has taken, and gotten the same results.

Instead, China has had 15,000 deaths from Covid—most of these from an outbreak in the spring of 2022 in Hong Kong, which has its own healthcare system.

Meanwhile, the United States has lost more than a million people to Covid since the pandemic began. Deaths currently continue at the rate of about 450 a day, which would add up to roughly 160,000 a year if present trends continue.

Clearly China and the United States have very different systems, and what works in one place would not necessarily work in the other. But given the remarkable success that China has had in protecting its population from a deadly and pernicious virus, surely US-based journalists are examining what lessons China has to teach us?

No, not if you work for the New York Times. There you’ll be writing yet another in a series of articles about how China has had the enormous misfortune of avoiding mass death.

“China’s ‘Zero Covid’ Bind: No Easy Way Out Despite the Cost,” is the headline of the latest iteration (9/7/22), written by Vivian Wang. The article begins:

Tens of millions of Chinese confined at home, schools closed, businesses in limbo and whole cities at a standstill. Once again, China is locking down enormous parts of society, trying to completely eradicate Covid in a campaign that grows more anomalous by the day as the rest of the world learns to live with the coronavirus.

But even as the costs of China’s zero-Covid strategy are mounting, Beijing faces a stark reality: It has backed itself into a corner. Three years of its uncompromising, heavy-handed approach of imposing lockdowns, quarantines and mass testing to isolate infections have left it little room, at least in the short term, to change course.

Nowhere in the article is any comparison of the respective death toll in China and the US. Or any hint that life expectancy in the US has now dropped below that of China—76.1 vs. 77.1 years, respectively (Quartz, 9/1/22)—an acknowledgment that would render ridiculous the Times‘ assertions that that China’s “government has pushed propaganda depicting the virus as having devastated Western countries,” and that President Xi Jinping “has prioritized nationalism over the guidance of scientists.”

But it’s not just the Covid death toll that the Times has to hide in order to make its anti-China spin remotely credible. Much of the piece deals with the hardship supposedly caused by the zero-Covid policy: “The social and economic cost will continue to increase,” insists one of the article’s relatively few sources, the Council on Foreign Relations’ Yanzhong Huang (author of the New York Times op-ed “Has China Done Too Well Against Covid-19?”—12/29/20—which argued that “China’s comparative success now risks hurting the country”).

Wang sure does make the economic situation in China sound grim:

Many Chinese have found ways to cope, even if reluctantly: putting in longer hours to scrape up more money, cutting back on spending. Complaints about a shortage of medical care or food often emerge, but some residents say they support the overarching goal….

Youth unemployment is soaring, small businesses are collapsing and overseas companies are shifting their supply chains elsewhere. A sustained slowdown would undermine the promise of economic growth, long the central pillar of the party’s legitimacy.

When you add it up, China is expected to be 13.8% richer at the beginning of 2023 than it was when the pandemic began—whereas the US will be just 3.4% better off. So which country’s belts need tightening as a result of its Covid strategy?

The Times similarly had to suppress any comparative numbers to make it seem like China’s vaccination strategy was particularly dangerous:

Buoyed by its early success at containment, the party was slow at first to encourage vaccination, leaving many older Chinese vulnerable….

While other countries prioritized vaccinating the elderly, China made older residents among the last to be eligible, citing concerns about side effects. And it never introduced vaccine passes, perhaps sensitive to public skepticism of its own vaccines.

In late July, about 67% of people aged 60 and above had received a third shot, compared to 72% of the entire population. Medical experts have warned that an uncontrolled outbreak could lead to high numbers of deaths among the elderly, as occurred during a wave this spring in Hong Kong, which also suffered from low vaccination rates.

Go to a helpful page of the New York Times website called “Tracking Coronavirus Vaccinations Around the World,” however, and you’ll find that China isn’t “suffer[ing] from low vaccination rates”; it actually has one of the highest rates of Covid vaccination in the world, with 93% receiving at least one dose and 91% “fully vaccinated.”  The latter number compares with 86% in Australia and South Korea, 84% in Canada, 81% in Japan and Brazil, 79% in France, 76% in Britain and Germany—and 67% in the US.

Well, yes—and that’s part of the reason that tens of thousands of elderly people will die this year as part of the US’s effort to “learn…to live with the coronavirus.”