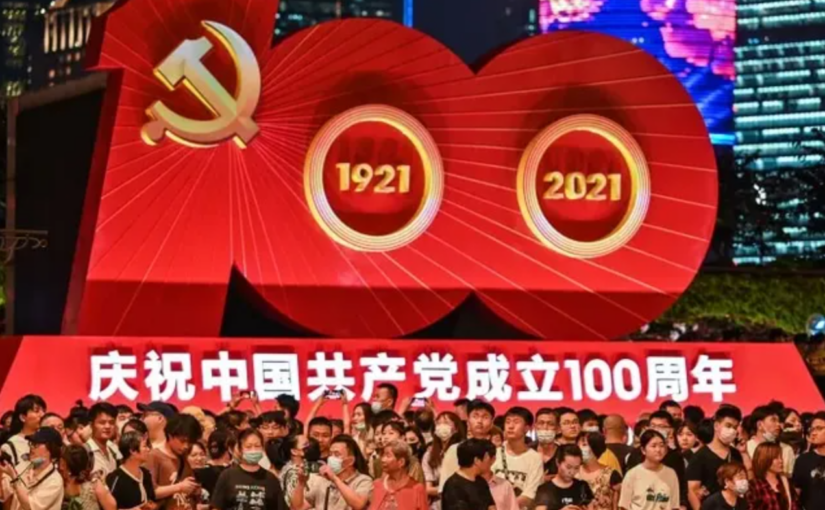 The below article by Stephen Millies was originally published by the US socialist journal Struggle/La Lucha. It is an interesting and provocative response to those comrades on the left who contend that capitalism has been restored in the People’s Republic of China.

Noting that China’s economy may already be larger than that of the United States, Stephen asserts that: “This tremendous economic growth is the result of China’s socialist revolution… You can’t explain China’s fantastic economic growth except by admitting there’s some other social system than capitalism in charge.”

An interesting aspect of the article is its presentation of how the Soviet Union, even in the late 1980s, played a major part in the liberation of southern Africa. It also notes that: “Sometimes retreats are absolutely necessary. For example, the Long March was a glorious retreat that saved the Communist Party of China from being destroyed.” In this context, Stephen also references Lenin’s New Economic Policy (NEP), along with an observation from Karl Marx that, following a socialist revolution, the working class might have to “buy off the band” of the wealthy.

Wall Street and the Pentagon view the People’s Republic of China as their number one enemy. China is the target of U.S. imperialism’s “Pivot to Asia.”

China’s economy may already be larger than the United States. The American Enterprise Institute―one of the best-known capitalist think tanks ― admits China surpassed the U.S. as the world’s biggest manufacturer back in 2010.

China is now the “workshop of the world.” In 2021, China built nearly 17 million more motor vehicles than the U.S.

This tremendous economic growth is the result of China’s socialist revolution. It’s not just a matter of China making more than a billion tons of steel a year or having more miles of high-speed rail than the rest of the world.

When Mao Zedong declared “China has stood up” in 1949 and the People’s Republic of China was born, Chinese people lived to be, on average, just 36 years old.

By 2022 life expectancy had more than doubled to reach 77.3 years. That’s a longer lifespan than in the United States.

Despite these tremendous gains, some communists and revolutionaries contend that capitalism has been restored in the People’s Republic of China. They point to the 606 billionaires in China, including 67 in Hong Kong.

The People’s Republic of China is entangled in the capitalist world market. Almost $2.5 trillion in foreign direct investment has poured into China since 1992.

This represents millions of Chinese workers being exploited by foreign capitalists. For example, in 2021, General Motors made 2.9 million cars in China.

That’s almost 700,000 more vehicles than it sold in the U.S. Tesla is investing $7.5 billion in its Shanghai “gigafactory.”

Unlike China before liberation, none of this investment is colonial in character. Foreign corporations have to share technology and know-how. Elon Musk ignored California’s safety regulations during the height of the COVID-19 pandemic, but he has to follow Chinese laws.

Decades ago, many revolutionaries had already considered the Soviet Union to be capitalist.

Mikhail Gorbachev ― who opened the door to capitalist restoration ― didn’t come out of nowhere. He rose in the bureaucracy under both Khrushchev and Brezhnev.

There were hundreds of thousands of Gorbachevs in the Soviet government and Communist Party. They were supporters of Gorbachev’s anti-Marxist “new thinking” that sneered at the class struggle. These elements shared Gorbachev’s illusions about U.S. imperialism and capitalist society in general.

Most of the “oligarchs” came from their ranks. They stole trillions of dollars worth of socialist property that workers and peasant farmers had built over a dozen five-year plans.

Aided the liberation of Angola, Namibia

Yet as late as 1988, Soviet-built MiG-25 jet fighters gave the People’s Armed Forces of Liberation of Angola air superiority in the crucial battle of Cuito Cuanavale. A coalition of liberation forces decisively defeated the apartheid army from South Africa, backed by the Pentagon.

These included the People’s Liberation Army of Namibia (PLAN), the armed wing of the South West Africa People’s Organization (SWAPO); uMkhonto we Sizwe (MK), the armed section of the African National Congress (ANC), and the Revolutionary Armed Forces of Cuba. Also present were military advisers from the Socialist Republic of Vietnam and the Soviet Union.

Less than two years after this battle, Nelson Mandela walked out of prison on Feb. 11, 1990.

Critics of the Soviet leadership could see for themselves which side of the world the Soviet Union and its allies were on.

It’s been over 30 years since socialism was tragically overthrown in the Soviet Union. This was a greater defeat for workers and oppressed people everywhere than Hitler crushing the German working class.

To have written off Soviet socialism in the decades before Gorbachev rose to power confused revolutionaries. It disarmed communists when the real counter-revolutionary threat appeared.

Those that claimed that the Soviet Union was already capitalist 50 or 60 years ago apparently didn’t understand that capitalism can’t function without a huge body of unemployed workers. Frederick Engels, the co-thinker of Karl Marx, called jobless workers the industrial reserve army.

Capitalists know this well. Sam Insull ― whose crooked Midwestern utility empire collapsed in the Great Depression ― declared that “the greatest aid to the efficiency of labor is a long line of men waiting at the gate.” Meaning women and men desperately seeking a job.

But there was no industrial reserve army in the Soviet Union. Instead, the country suffered from a labor shortage.

This was one of the features of Soviet society that made it incompatible with capitalism. The Soviet economy was planned. A state monopoly of foreign trade kept the International Monetary Fund and the World Bank at bay.

In contrast to the Soviet Union, millions of workers in the People’s Republic of China are without a job. The unemployment rate for youth between 16 and 24 years old reached 19.9% in July.

Particularly affected are the record number of 10.75 million college graduates. Before liberation in 1949, there were only 117,000 college students in China.

A big reason for the lack of hiring has been the anti-COVID actions that socialist China took. The capitalist media attacked these absolutely necessary health measures.

Huge cities like Beijing and Shanghai were temporarily closed. Unarmed socialist police in Wuhan delivered meals to people in their homes.

Meanwhile, 14,922 people died in the People’s Republic of China, which has over a billion more people than the United States. (China’s total includes 9,701 people who died in the capitalist Special Administrative Region of Hong Kong.)

No capitalist government on earth could have done what socialist China did in fighting the pandemic. Banksters and billionaires wouldn’t have allowed it. Profits are more precious than life to billionaires and their media stooges.

John Tyson (chicken billionaire) and other dead-animal capitalists got Trump to issue an executive order keeping the meatpacking plants open and shielding themselves from lawsuits. As a result, over 59,000 meatpacking workers caught the virus, and 269 died.

Kept on a leash

China has a sizeable capitalist class, with 606 billionaires forming its crest. These capitalists are kept on a leash.

Liu Han’s $6 billion stash didn’t prevent him from being executed in 2015. A millionaire (much less a billionaire) has never been executed in the United States.

A handful of banks play a dominant role over the U.S. government. The Communist Party of China runs China’s banks.

The commanding heights of China’s economy are controlled by the Communist Party. While production has stagnated in the imperialist countries, China’s steel production leaped from 400 million tons in 2007 to over a billion tons today.

You can’t explain China’s fantastic economic growth except by admitting there’s some other social system than capitalism in charge.

If socialism had been overthrown in China, there would be no need for a separate regime for capitalist Hong Kong, which has its own currency. China liberated Hong Kong from British colonialism in 1997.

After the Soviet Union was destroyed, Wall Street’s next target was China. But, to many in the military-industrial complex, NATO’s 78 days of bombing Yugoslavia was a poor substitute.

Their frustration was behind the deliberate bombing of the Chinese embassy in Belgrade.

NATO’s war against Yugoslavia was a class war. Despite all the concessions that Tito had made to imperialism, what remained of Yugoslavia in 1999 was socialist in class character.

Sometimes retreats are absolutely necessary. For example, the Long March was a glorious retreat that saved the Communist Party of China from being destroyed.

Mao Zedong argued for the Red Army to take the Long March to escape encirclement. Lenin and the Bolsheviks had to make a sharp economic retreat in the early 1920s by launching NEP, the New Economic Policy.

Karl Marx contemplated that following a socialist revolution, the working class might have to “buy off the band” of well-to-do elements.

Confronted by world imperialism, the People’s Republic of China has allowed both foreign and domestic capital to flourish. It was a case of bending instead of being broken.

While the capitalist class has grown in China, much more spectacular has been the growth of the working class.

The Chinese Revolution’s biggest problem was the small number of workers in the country. In 1949, workers were perhaps 1% of the population.

Today the working class in the People’s Republic of China is hundreds of millions strong. Thousands of strikes occur against private capitalists.

Chinese workers credit communism for China’s tremendous advances in health and economic growth. The social weight of the working class has been responsible for China’s extensive reforms in health care and education over the last 20 years.

Those who claim that a counter-revolution has taken place in China should show when this overthrow occurred. Comrade Mao Zedong famously wrote that a revolution is not a dinner party.

Just as a rising class needs to smash the state machine of the old ruling class ― as was done in the French and Bolshevik revolutions ― so would a counter-revolution need to smash the apparatus built by the Chinese Revolution. That hasn’t happened.

To claim that the concessions made to capitalists over the last 45 years amount to overthrowing the Chinese Revolution is reformism in reverse.

There are many more chapters to be written in the Chinese Revolution. The working class in the People’s Republic of China ― which includes millions of workers from minority nationalities like the Uyghurs and Tibetans ― will have the last word.

One thought on “Why China isn’t capitalist”