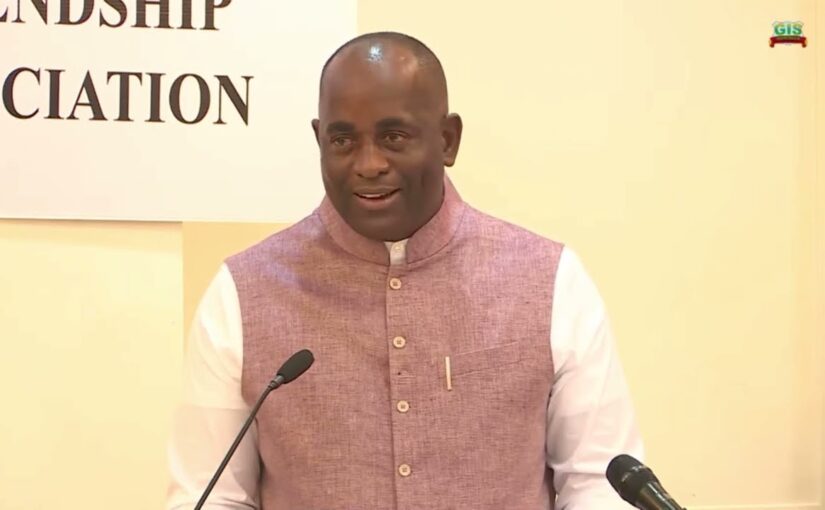 The following video, which we reproduce with thanks to our friends at Kawsachun News, features a warm and important speech by Prime Minister Roosevelt Skerrit of the Commonwealth of Dominica at the September 10 launch of the Dominica-China Friendship Association, attended by a galaxy of the country’s VIPs, including President Charles Savarin.

Prime Minister Skerrit hails the formation of the Friendship Association as a “most progressive move towards a deepening of already strong ties” between the two governments and peoples.

Roosevelt Skerrit is the third successive Prime Minister from the Dominica Labour Party. The first, Rosie Douglas, was a long-standing and good friend of the People’s Republic and Communist Party of China. Unfortunately, he tragically died on October 1 2000, from a heart attack, after just a few months in office, and before he could complete the work he had initiated of breaking the ties that the previous right-wing government had established with the Taiwan authorities. It fell to his close comrade Skerrit to take this step on March 23 2004.

In his speech, Skerrit notes that this decision has enhanced the lives of Dominica’s people – including in education, human resources, health care, agriculture and sports. China has also extended invaluable help in the face of two tropical storms and the global pandemic. He drew particular attention to the word friendship in the new association’s name.  Friendship, the Prime Minister explained, means that you stand with your friends, especially in difficult times. He encouraged the association to issue statements of solidarity with China whenever the country is unjustly attacked.