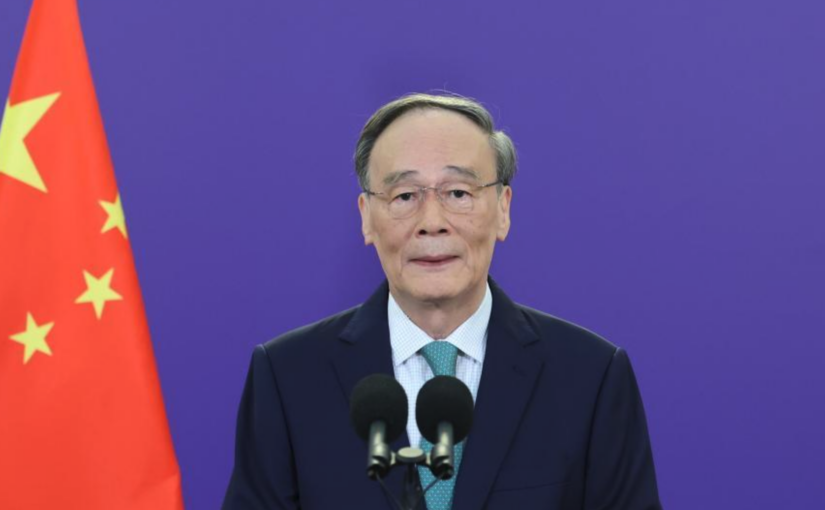 Marking the United Nations’ International Day of Peace on September 21, the Chinese People’s Association for Peace and Disarmament (CPAPD) organized a commemorative event in hybrid format, taking as its theme, ‘Acting on the Global Security Initiative to maintain world peace and stability’. Several hundred people from around the world attended, offline and online.

The event was opened with a congratulatory letter sent by Chinese President Xi Jinping, which was read by Liu Jianchao, Minister of the International Department of the Communist Party of China.

In his letter, President Xi said that the world has entered a new period of turbulence and transformation. “At this important historical juncture, I put forward the Global Security Initiative, call on all countries to uphold the common, comprehensive, cooperative and sustainable security concept, respect the sovereignty and territorial integrity of all countries, abide by the purposes and principles of the UN Charter, and take seriously the legitimate security concerns of all countries.”

This was followed by a keynote speech from Chinese Vice President Wang Qishan, delivered via video link. Wang noted that, all countries need to practice mutual respect, enhance solidarity and coordination, respect others’ national security, sovereignty and development interests, and refrain from interfering in others’ internal affairs. “We need to work together to improve global governance, firmly oppose hegemony and bullying, practice true multilateralism, safeguard world peace and stability, and promote the development and prosperity of all countries.”

The Chinese Vice President was followed by the following speakers:

President Bhandari of Nepal said that the Five Principles of Peaceful Coexistence were the bedrock of her country’s foreign policy and called on the international community to increase its support for the underdeveloped countries.

Sommart Pholsena from the socialist Lao People’s Democratic Republic decried actions that impeded the development of a multipolar world. He recalled how his country had suffered from an imperialist war of aggression, with one ton of bombs being dropped for every person in Laos.

Former Austrian President Fischer noted that his country had established diplomatic relations with China in 1971 and that Austria’s experience had been that different systems need be no barrier to friendship between nations.

In a powerful speech, former Brazilian President Dilma Rousseff said that the end of the first Cold War had been proclaimed as the “end of history”, but this period had just brought more conflicts, heralded by the Iraq war of 1991. Many hundreds of thousands of people have been killed as a result of the wars in Iraq and Afghanistan and the world has never been a more dangerous place.

In the twentieth century, foreign interference in Latin America had mainly taken the form of coups. In the twenty-first, it was mainly support for neo-liberal and fascist governments. In Brazil, hunger had been eliminated when Workers’ Party (PT)-led governments had been in power, but now it once again afflicted some three million people. Dilma referred to the successive overthrow of progressive governments in Latin America in the recent period – of Zelaya in Honduras, Lugo in Paraguay, herself in Brazil, and Morales in Bolivia. However, now the trend is in favour of the return of people’s governments.

Turning to the conflict between Russia and Ukraine, Dilma said that the United States was using Europe in an attempt to contain Russia and the peoples of Europe were paying with their lives. She described sanctions as among the most lethal of weapons, citing in particular, the 60-year blockade of Cuba, now being replicated in the case of Venezuela. However, neither country has given in or surrendered.

Dilma praised late Chinese leader Deng Xiaoping for advancing the concepts of peace and development as the trends of the times. They remain, she said, the common values of people around the world. The reforms that China had initiated from the end of the 1970s had led to the country’s elimination of extreme poverty and this was itself a major contribution to world peace. China, she continued, advanced an inclusive globalisation, opposed to the imposition of failed models of development. China’s promotion of multipolarity was illustrated by its Belt and Road Initiative (BRI), first outlined in 2013. In conclusion, she described the coming presidential election in Brazil as crucial, expressing confidence that the Brazilian people will again embrace a better future.

The Deputy Prime Minister of Mongolia highlighted the fact that his country had declared itself a nuclear-free-zone in 1992 and is a signatory to the Treaty on the Prohibition of Nuclear Weapons. Mongolia is also a major contributor to UN peacekeeping forces and has an important role to play in peace initiatives on the Korean peninsula.

In the concluding speech, CPAPD President Ma Biao said that at present hegemony and power politics are rampant. The Global Security Initiative (GSI), advanced by President Xi Jinping, represented humanity’s common cause of peace and paid attention to the reasonable security concerns of all countries. He particularly warned against the trend of some countries to practice unilateralism in the name of multilateralism. Expressing support for the United Nations adoption of the theme, ‘End Racism, Build Peace’ for this year’s International Day of Peace, he underlined the fact that all the world’s civilisations are equal.

The below two short articles, originally carried by the Xinhua News Agency, report on the letter sent to the gathering by President Xi Jinping and the speech delivered by Vice President Wang Qishan.

Chinese President Xi Jinping sent a congratulatory letter to the commemorative event held here on Wednesday for the International Day of Peace 2022, which falls on Sept. 21.

In his letter, Xi noted that at present, the international security situation is undergoing profound and complex changes, and the world has entered a new period of turbulence and transformation.

“At this important historical juncture, I put forward the Global Security Initiative, call on all countries to uphold the common, comprehensive, cooperative and sustainable security concept, respect the sovereignty and territorial integrity of all countries, abide by the purposes and principles of the UN Charter, and take seriously the legitimate security concerns of all countries,” Xi said.

China also advocates that all countries should resolve differences and disputes through dialogue and consultation, shoulder the responsibility of safeguarding peace, follow the path of peaceful development, and work together to build a community with a shared future for humanity, Xi said.

This year’s commemorative event, themed “Acting on the Global Security Initiative to Maintain World Peace and Stability,” is in line with the spirit of the UN Charter in maintaining international peace and security. It is hoped that the event will gather the wisdom and strength of all parties and make positive contributions to maintaining world peace and stability, Xi said.

China is ready to work with the international community to jointly implement the Global Security Initiative, Chinese Vice President Wang Qishan said on Wednesday while attending the commemorative event for the International Day of Peace 2022 via video link.

All countries need to practice mutual respect, enhance solidarity and coordination, respect others’ national security, sovereignty and development interests, and refrain from interfering in others’ internal affairs, Wang said in his keynote speech.

“We should uphold the vision of common, comprehensive, cooperative and sustainable security, share weal and woe, and safeguard common security,” Wang said.

He also called for dialogue and consultation to achieve peaceful coexistence, and unequivocal support for all efforts conducive to the peaceful settlement of crisis.

“We need to work together to improve global governance, firmly oppose hegemony and bullying, practice true multilateralism, safeguard world peace and stability, and promote the development and prosperity of all countries,” Wang said.

Pointing out that peace is the common cause of mankind, Wang said China will unswervingly follow the path of peaceful development and continue to be a builder of world peace, a contributor to global development and a defender of the international order.

“China is ready to work with all peace-loving countries and peoples in the world to build a community with a shared future for mankind,” Wang added.

Foreign participants said that the Global Security Initiative meets the common aspirations of people of all countries and has injected important impetus into building a peaceful, secure and prosperous world.