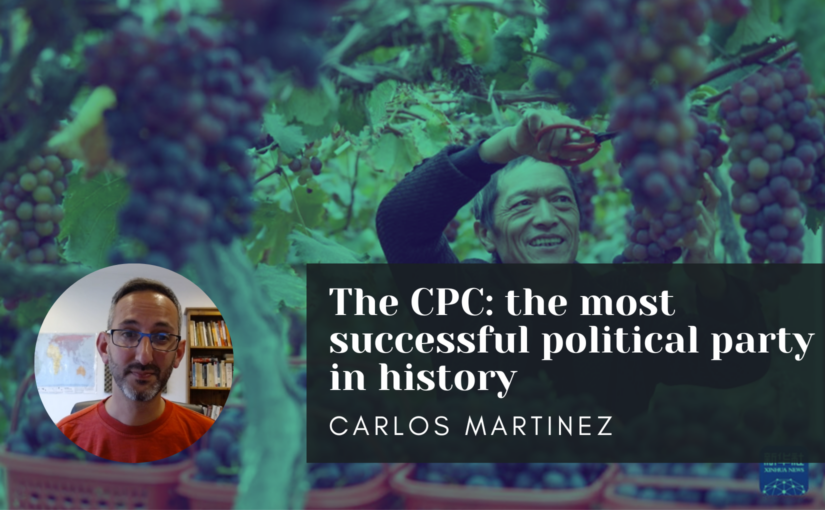 The following article, written for China Today by Carlos Martinez, describes the historic progress China has made over the last decade, and seeks to understand the political framework in which this progress has been made. “Why China? Why is it China and not another country that has carried out the most comprehensive poverty elimination in history? How has China been able to leap from a state of intense poverty, underdevelopment and backwardness just 73 years ago to becoming a country with the second-largest economy in the world, with the average life expectancy of its citizens surpassing that of people in the United States?” Carlos concludes that the answer lies in “China’s political system, its revolutionary history, and the leadership of the CPC”. He opines that China’s socialist system privileges the interests of the masses, unlike the capitalist countries, in which the capitalist class is the ruling class and the interests of the people are subjugated to those of profit. Carlos concludes by noting that China’s successes are a source of inspiration to progressive people the world over.

The 20th National Congress of the Communist Party of China (CPC), which commenced on October 16, 2022, is seen as a milestone event in the history of the CPC.

In the Report delivered by Xi Jinping, general secretary of the CPC Central Committee, to the Congress, major achievements that the country has accomplished over the past 10 years were summarized.

The core component of achieving a “moderately prosperous society in all respects” was the campaign to alleviate extreme poverty. This goal was achieved in late 2020 – remarkably, whilst China was concurrently battling the COVID-19 pandemic (a pandemic which has sadly resulted in a dramatic rise in poverty in many countries around the world). At the start of the targeted poverty alleviation program in 2014, just under 100 million people were identified as living below the poverty line; seven years later, the number was zero.

United Nations Secretary-General Antonio Guterres stated that China had carried out “the greatest anti-poverty achievement in history.” To eradicate extreme poverty in a developing country of 1.4 billion people – which at the time of the founding of the People’s Republic of China in 1949 was one of the poorest countries in the world – is without a doubt an extraordinary accomplishment.

Why China? Why is it China and not another country that has carried out the most comprehensive poverty elimination in history? How has China been able to leap from a state of intense poverty, underdevelopment and backwardness just 73 years ago to becoming a country with the second-largest economy in the world, with the average life expectancy of its citizens surpassing that of people in the United States?

The answer lies in China’s political system, its revolutionary history, and the leadership of the CPC – which is surely, by any reasonable measure, the most successful political party in history. Fundamentally, what defines modern China and provides the basis for its success is the socialist system. Power is exercised by, and on behalf of, the people, not a small group of people that own and deploy capital. In capitalist countries, the capitalist class is the ruling class and has political mechanisms in place that allow it to privilege its own interests over those of ordinary people.

The U.S. is a far richer country than China, having industrialized two centuries earlier and having built a global imperialist system via which it continues to accrue significant economic benefits. And yet the U.S. cannot guarantee its people the same fundamental human rights as people in China enjoy. There are hundreds of thousands of homeless people in the U.S.; there are millions of children living in poverty; there are tens of millions that lack access to healthcare. These problems are getting worse, not better, because the ruling class is unwilling or unable to deploy the enormous resources required to fix them. While life improves for the Chinese people, the people of the U.S., U.K. and many other countries are suffering under policies of neoliberal austerity.

Deng Xiaoping stated in 1987 that “only the socialist system can eradicate poverty.” The class structure of the People’s Republic of China means that the needs of the people are always prioritized. China was able to register major successes in the war on poverty because it mobilized hundreds of thousands of people nationwide to work with poor communities and identify means to sustainably and permanently improve their living conditions. As Xi Jinping has observed, “thanks to the sustained efforts of the Chinese people from generation to generation, those who once lived in poverty no longer have to worry about food or clothing or access to education, housing and medical insurance.”

The pandemic provides another example of the relative effectiveness of different political systems. The U.S. has suffered over a million deaths from COVID-19. The U.K. has suffered nearly 200,000. Meanwhile China has suffered a little over 27,000 COVID-19 deaths, in spite its population being four times larger than that of the U.S., and 20 times larger than that of the U.K. China has been infinitely more successful in controlling the pandemic because it, from the beginning, mobilized enormous resources to the project of saving human life. In the West, the priority was to protect profit, to ensure economic business-as-usual. Most ironically, China was successful in saving human lives but the West was not successful in protecting profits. Because China acted quickly to prevent COVID-19 getting out of control, it was able to maintain economic growth while the West fell into recession.

The struggle against climate breakdown is also instructive. Although China is still a developing country, it has emerged as by far the global leader in the generation and use of renewable energy. Xi Jinping has underscored the concept of ecological civilization, putting environmental sustainability at the heart of Chinese policy-making and mandating that China should “never again seek economic growth at the cost of the environment.” And in 2021, China committed to peaking carbon emissions by 2030 and realizing carbon neutrality by 2060, and has already developed systematic programs for reaching these goals.

Responsible for a third of all investment in new energy worldwide, China’s innovations have served to massively reduce the cost of solar, wind and hydro power globally, to the point where they are now price-competitive with fossil fuels in many parts of the world. China’s total renewable energy capacity is greater than the U.S., the EU, Japan and the U.K. combined. Around 99 percent of the world’s electric buses are in China, along with 70 percent of the world’s high-speed rail. Furthermore, its forest coverage has increased from 12 percent in the early 1980s to 23 percent today.

As with its commitment to poverty alleviation and suppressing COVID-19, China’s resolute commitment to building an ecological civilization is a manifestation of its socialist system and the outstanding leadership of the CPC.

China’s successes since the founding of the PRC, and the successes it will surely achieve on the path to becoming a great modern socialist country in all respects, will undoubtedly inspire progressive people the world over.

2 thoughts on “The CPC: the most successful political party in history”