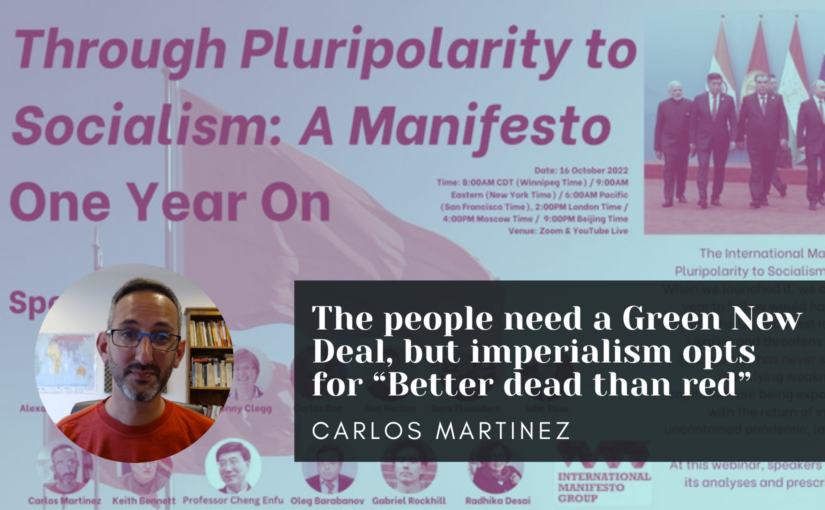 At the recent webinar marking the first anniversary of the International Manifesto Group’s document ‘Through Pluripolarity to Socialism’, Friends of Socialist China co-editor Carlos Martinez made a contribution about the ecological crises faced by humanity, comparing the progress (or lack thereof) tackling global warming in the West with that made by China.

Carlos observes that, in spite of the Biden administration’s oft-stated commitment to seriously reducing its greenhouse gas emissions, the US-led proxy war against Russia is having a disastrous environmental impact, leading to an increase in fracking and coal consumption. Meanwhile China is leading the world in renewable energy, electric vehicles and afforestation; and instead of cooperating with China and finding common solutions to common problems, the West instead imposes sanctions on Chinese products that are crucial to green energy supply chains. So, while people in the West might want a Green New Deal, but what they’re actually getting is “better dead than red.”

What I’m going to address in these brief remarks is the question of climate change; how it’s covered in the Manifesto, and the developments that have taken place in the last year since the Manifesto was released.

The Manifesto talks of “an ecological emergency of climate warming, pollution and biodiversity loss, rendering our planet increasingly uninhabitable.” And it points the blame for this situation at neoliberal capitalism, which has “turned everything the earth offers humanity gratis into plunder and profit.”

In terms of what neoliberal capitalism is doing, this analysis – very sad to say – still holds true. Indeed the situation is in many ways worse than it was a year ago, in spite of a great deal of rhetoric and the passing into US law, two months ago, of the Inflation Reduction Act, including climate commitments that Joe Biden considers to be a landmark success of his presidency to date.

It is, unquestionably, the US’s must important set of climate commitments thus far. Unfortunately, that’s not saying very much. It’s still nowhere near the type of unprecedented action the world needs from the US – which, of the major countries, has the highest per capita emissions in the world, and which has contributed a full quarter to global cumulative carbon emissions, in spite of having just four percent of the world’s population.

Even if the US meets its targets under the Inflation Reduction Act – which is doubtful enough – then in five years time it will still be generating significantly less renewable energy than China will generate this year.

But anyway, it’s more fruitful to look at what the US and its allies are actually doing, as opposed to what they say they’re doing or will do.

Most obviously, the US is driving NATO’s proxy war against Russia, which is nothing short of disastrous in environmental terms.

In order to punish Russia, to consolidate the Western military-economic-ideological alliance, and to generate profits for the US’s domestic fossil fuel industry, the Biden administration has been heavily promoting sanctions on Russian gas and pushing Europe towards reducing its reliance on Russian energy long term.

You might hope that at least that might mean a massive commitment to renewable energy. It doesn’t. It actually means:

1) A major increase in US exports of fracked shale gas to Europe.
2) A return to coal for much of Central Europe.
3) Ramped up drilling for oil in the North Sea.
4) A renewed interest in fracking in Britain and elsewhere.

All of these are significantly more damaging in environmental terms than Russian natural gas.

Hydraulic fracturing – fracking – is an unproven and likely extremely dangerous technology, which potentially causes earthquakes, water pollution, and serious leaks of methane – which has 40 times the greenhouse effect that carbon dioxide does. And even if everything goes according to plan, well, shale gas is still a fossil fuel.

And to get it from North America to Europe, it has to be liquified, stored at minus 70 degrees celcius, and transported by ship. This whole process is obviously extremely costly in both financial and energy terms, certainly much more so than using existing pipelines running from Russia through Europe.

Meanwhile Germany, for decades a poster child of the renewable energy movement, has started reopening its coal mines. Its coal use is up 17 percent on last year, corresponding to a decrease in natural gas imported from Russia. As most people know, coal is the worst of the fossil fuels, associated with twice the carbon emissions of natural gas. And if there isn’t enough farce and irony in the story so far, well, it’s the German Green Party that’s most hawkishly pushing these policies as part of an overall anti-Russia strategy.

As is so often the case, the expression that comes to mind is: thank goodness for the existence of the People’s Republic of China.

A couple of months after the release of the Manifesto last year, China announced some historic commitments: achieving peak greenhouse gas emissions before 2030, and reaching carbon neutrality by 2060.

This is entirely in line with what the UN and the intergovernmental panel on climate change have recommended for developing countries, and will constitute by far the fastest transition away from fossil fuels for an industrialised country.

And China is generally in the habit of keeping its promises. It already looks like it will hit peak emissions before 2030, and is already exceeding its targets for renewable energy generation.

Coal has gone from 80 percent of China’s power mix 20 years ago to under 50 percent now. It’s actually a smaller proportion of the power mix than in Australia. The Belt and Road is getting greener and greener, with coal projects cut out and a big emphasis on renewables.

China is responsible for a third of all renewable energy investment globally. It’s the world leader in electric buses, electric trains and electric cars. It is by far the global leader in the installation, generation and consumption of solar power, wind power and hydro power.

No country has done as much as China in terms of reforestation. In the last four decades, forest coverage has doubled, from 12 percent to 24 percent.

What allows this progress of course is the class structure of Chinese society. Power isn’t dominated by a wealthy elite; by a class of people that own and deploy capital, as is the case – by definition – in capitalist countries. Power is exercised by and on behalf of the people, hence the government represents the interests of the people. That’s why the idea of a Green New Deal, which is a completely marginal, pie-in-the-sky, radical-left idea in the West, is pretty close to what’s actually happening in China.

Unlike the US, unlike Britain, unlike the EU or Canada or Australia, China spends significantly more on renewable energy and environmental protection than it does on its military.

Meanwhile, as the rich countries continue to fail to meet their commitment – agreed in Copenhagen in 2009 – to provide 100 billion dollars annually in climate finance to poorer countries, China in that time period has conducted hundreds of foreign assistance programs related to climate change adaptation and mitigation; and has helped to build hydropower, solar and wind power stations in dozens of countries.

All of this serves to highlight the utter recklessness and shortsightedness of the New Cold War. If the US genuinely cared about protecting the planet and saving humanity, it would do everything possible to cooperate with China on climate change, learn from its example and benefit from its innovations. Actually it’s doing the opposite – in support of its slander campaign regarding human rights in Xinjiang, it’s imposing sanctions on Chinese products, including essential components for solar power.

The people might want a Green New Deal, but what they’re getting is: “Better dead than red.”

It’s difficult to avoid the conclusion that – in the interests of the survival of our species – the peoples of the world need to follow the example of the socialist countries; to follow humanity’s trajectory through pluripolarity to socialism.

2 thoughts on “The people need a Green New Deal, but imperialism opts for “Better dead than red””