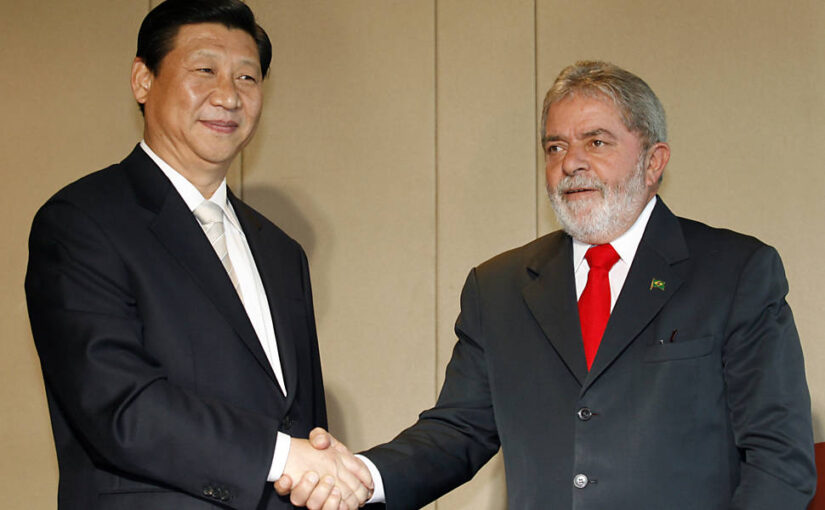 The victory of Luiz Inácio Lula da Silva, known universally as Lula, in the Brazilian presidential run-off, on Sunday October 30, has been warmly greeted in China. When he previously served as President, as well as when his fellow Workers’ Party (PT) comrade Dilma Rousseff was head of state, relations between the two countries were at their best ever. In contrast, while economic ties remained strong, outgoing far-right President Jair Bolsonaro strained political relations on a number of occasions and generally weakened Brazil’s independent diplomacy and contribution to the development of a multipolar world .

With Lula having been instrumental in the formation and development of BRICS, along with China, Russia, India and later South Africa, and being passionately committed to South-South cooperation in general, along with independent national development, poverty alleviation, and the elimination of hunger, relations with the Asian socialist giant can be expected to radically improve and develop with his return to office.

‘For Lula, the development of the economy and people’s livelihood will largely determine the stability of his Partido dos Trabalhadores’s rule… Brazil is likely to look more actively to the Asia-Pacific region to tap the potential of the Chinese market and attract Chinese investment,’ Zhou Zhiwei, an expert on Latin American studies at the Chinese Academy of Social Sciences, told the Global Times on Monday.

According to Zhou, Lula’s return is likely to bring back a smoother China-Brazil relationship, which will help both sides find more space and reap dividends of economic and trade cooperation, especially in agriculture and infrastructure construction.

‘Brazil may also seek to participate in the Belt and Road Initiative (BRI) under Lula,’ Zhou said. Brazil’s left-wing ruled neighbor Argentina announced its decision to join the BRI in February.

Given that Lula was instrumental in the establishment and launch of the BRICS mechanism during his last stint in office, analysts believe that he will continue to be active and positive about BRICS.

‘Lula is likely to place a high priority on cooperation between emerging powers, including BRICS. This means that cooperation among BRICS countries and communication on international hotspot issues and global affairs will be smoother and more stable than under Bolsonaro,’ Zhou said.

Lula’s victory was greeted ecstatically by the progressive forces in Latin America, reflecting the renewed tide of anti-imperialism and socialist orientation on the continent. Venezuela’s Telsesur reported:

‘Congratulations brother Lula, president-elect of Brazil! Your victory strengthens democracy and Latin American integration. We are sure that you will lead the Brazilian people on the path of peace, progress, and social justice, Jallalla Brasil!’, said the President of Bolivia, Luis Arce, through the social network [Twitter].

Meanwhile, the Cuban head of state, Miguel Díaz Canel, also via Twitter congratulated the leader of the Workers’ Party (PT): ‘Dear brother Lula, I congratulate you on behalf of the Cuban government and people, who celebrate your great victory in favor of unity, peace and Latin American and Caribbean integration. You can always count on Cuba.’

The Cuban President added: ‘Cuba congratulates you, dear comrade. They delayed your victory with atrocious methods but could not prevent you from winning with the people’s vote. Lula returns, the PT returns, social justice will return. We embrace you brother President Lula.’

Venezuelan President  Nicolás Maduro said on Twitter: ‘We celebrate the victory of the Brazilian people, who this October 30 elected Lula as their new President. Long live the people determined to be free, sovereign, and independent! Today in Brazil, democracy triumphed; congratulations Lula, a big hug.’

In his message, Chinese President Xi Jinping said that he stands ready to work with President-elect Lula, from a strategic height and long-term perspective, to jointly plan and lift China-Brazil comprehensive strategic partnership to a higher level so as to benefit the two countries and their people.

The following report on President Xi’s message was originally carried by the Xinhua News Agency.

Chinese President Xi Jinping on Monday sent a congratulatory message to Luiz Inacio Lula da Silva on his election as president of the Federative Republic of Brazil.

In his message, Xi pointed out that China and Brazil, both major developing countries and important emerging nations, share broad common interests and responsibilities.

Since China and Brazil established diplomatic ties 48 years ago, with the joint efforts of the two countries’ successive governments and all sectors of their societies, bilateral relations have witnessed long-term development, with cooperation in various fields yielding fruitful results.

Noting that China and Brazil enjoy long-term friendship, Xi said to deepen mutually beneficial cooperation serves the fundamental interests of the two countries and their people, and is conducive to maintaining regional and world peace and stability and promoting common development and prosperity.

Xi said he attaches great importance to the development of China-Brazil relations and stands ready to work with President-elect Lula, from a strategic height and long-term perspective, to jointly plan and lift China-Brazil comprehensive strategic partnership to a higher level so as to benefit to the two countries and their people.