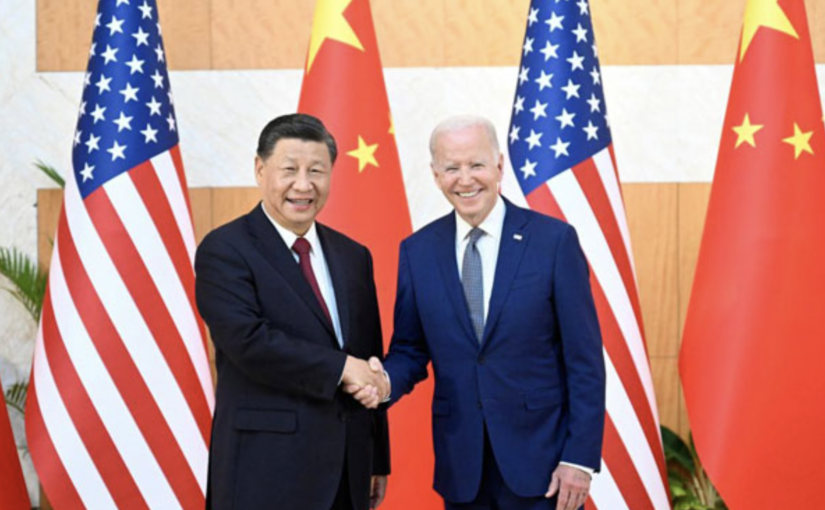 This valuable editorial from the Party for Socialism and Liberation assesses the bilateral meeting that took place between Xi Jinping and Joe Biden on 14 November 2022. Whilst welcoming the possibility of a lessening of hostilities between the world’s two biggest economies, and celebrating the return to dialogue on the key issues facing humanity, the authors point out that US administrations – both Democrat and Republican – have been building up a new Cold War against China over the course of more than a decade. “A new Cold War has already been set in motion through the actions of successive US administrations that have identified China as their number one target and taken aggressive measures to deepen confrontation.”

The editorial observes that several major capitalist powers and US allies such as France and Germany do not consider a full-scale “decoupling” to be in their interests, and that Biden may well be “at least rhetorically softening the US position in a nod to other nations that are uncomfortable with the pace of escalation.”

Lasting peace and wide-ranging cooperation between US and China would be of tremendous benefit to the people of the US, China and indeed the world, but it will require the US to give up on its strategy of hybrid warfare, of containment and encirclement. Most immediately, the US will need to respect China’s territorial integrity, stop supporting Taiwanese separatism, and ends its undermining of the One China principle.

President Biden and Chinese President Xi Jinping held their first meeting since Biden took office today, a high-profile summit meant to set the tone for U.S.-China relations in the coming period. Outwardly, the two leaders remained cordial and affirmed their willingness to maintain dialogue with one another, with Biden going so far as to say “there need not be a new Cold War” between the two powers. The two sides agreed to restart regular talks relating to cooperation in the fight against climate change, and Secretary of State Blinken is set to travel to China for follow up discussions in the near future.

But in fact, a new Cold War has already been set in motion through the actions of successive U.S. administrations that have identified China as their number one target and taken aggressive measures to deepen confrontation. Real peace would require a complete reorientation of U.S. policy — one that is desperately needed if the world is to avoid catastrophic conflict on a global scale.

The Biden administration presented today’s meeting in the framework of what they call “managed competition.” This is a reference to the overarching U.S. imperial doctrine of “great power competition,” essentially a euphemism for the new Cold War. For instance, Biden said in a press conference following the summit, “We’re going to compete vigorously. But I’m not looking for conflict, I’m looking to manage this competition responsibly.”

Biden is signaling his desire to maintain the United States’ posture of fundamental hostility to China, but at least rhetorically softening the U.S. position in a nod to other nations that are uncomfortable with the pace of escalation. China’s economy remains deeply integrated in the world market, and even major capitalist powers like France and Germany do not desire a complete breakdown in relations despite their underlying hostility to China’s socialist system. Given the existing balance of forces in world politics, the United States may calculate that a momentary easing of pressure could reduce the likelihood that the alliance between China and Russia will deepen.

For there to truly be lasting peace between the United States and China, the first thing the United States would need to do is unequivocally respect the territorial integrity of China. Any country views their sovereign territory as inviolable, and this is especially true for a country like China that fought for so long to be free from colonial rule. The U.S. government needs to stop provocative military sales and high-profile political visits to Taiwan and cease providing any support to those who wish to permanently separate the island from mainland China. The same is true in Hong Kong, Xinjiang, and Tibet — all parts of China that the United States has long hoped to carve away in an effort to dismember and weaken the country.

The United States would likewise need to end its economic campaign to damage strategic industries in China. Earlier this year, Congress passed the CHIPS Act which restricts U.S. businesses’ ability to trade with China in the crucial microchip sector while subsidizing these same corporations to the tune of $52 billion. A range of tariffs and other measures stemming from Trump’s trade war with China remain in place under Biden.

Real peace, not “managed competition,” with China would be of enormous benefit to the vast majority of people in the United States. That the number one and number two economies in the world are unable to meaningfully cooperate on shared challenges because of a policy of permanent hostility is absurd. Think about how much more effectively the COVID-19 pandemic could have been managed on a world scale if this were the case, or any number of other health and scientific issues facing the world. While the two sides will at least be talking to each other now on climate change, the degree of cooperation necessary to truly tackle this enormous global emergency is unthinkable so long as the U.S. government officially considers China its number one enemy. A true end to anti-China hostility would also help stem the rising tide of anti-Asian racism and violence in the United States, a phenomenon rooted in the Cold War-style hysteria targeting the country.

But perhaps the most important benefits that would come with a policy of real peace with China would be in the reduction of military tensions. The entire globe would benefit from the United States stepping back from the brink and putting to rest fears of a direct military confrontation between the two nuclear-armed powers. The ever-growing Pentagon budget, now set to total over $800 billion, is premised in large part on the new Cold War with China. This enormous sum of money could be put to use solving any number of dire social crises — poverty, homelessness, broken down infrastructure, hunger, and much more.

In the long run, the ambitions of the U.S. empire cannot actually be “managed.” The big banks and corporations that dominate the economy of the United States also dominate the entire world, and their profits depend on them maintaining this global preeminence. No alternative center in world politics, especially one like China that is led by a communist party, can be allowed to exist. This drive to expand and control is inherent in the capitalist system itself. True peace ultimately hinges on the elimination of the profit-driven system that plunges the world into intractable conflict.

One thought on “‘Managed competition’ with China or real peace?”