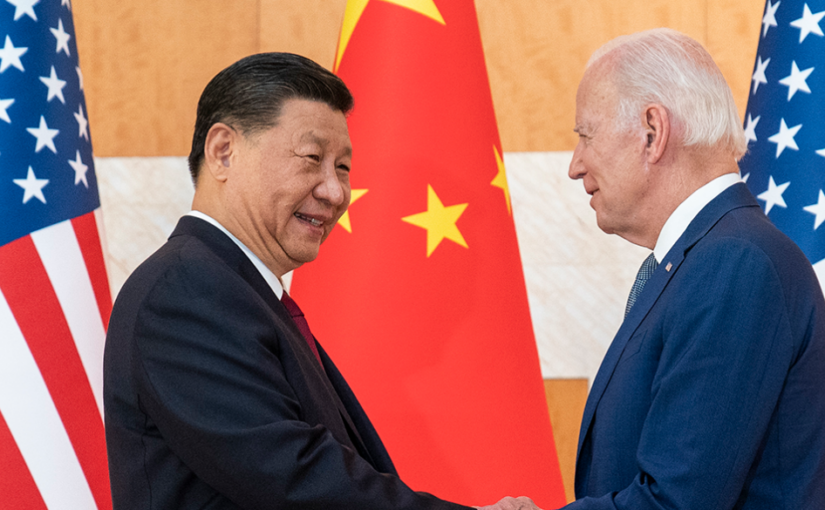 In this article, first published in the Morning Star, Doug Nicholls, General Secretary of Britain’s General Federation of Trade Unions (GFTU), analyses the meeting between Xi Jinping and Joe Biden, which he says, “creates an opportunity to build for peace.”

Doug attributes this to China’s skillful manoeuvering as well as to the fact that, “more countries throughout the world want peaceful coexistence between nations and multipolar political equality rather than US hegemony. China is recognised as the leading advocate of this position.” He also notes that, “China expressed its very powerful alternative vision of a socialist world eloquently in the talks.”

We are very pleased to make available this excellent analysis.

AFTER I had been startled by John Pilger’s film The Coming War on China which charts the military and policy escalation against the country, I started to take closer note of how the US was driving fast to a hot war, using its proxy war against Russia in the Ukraine and a spectacular global misinformation programme.

The Labour and Tory parties’ dutiful allegiance to the “special relationship” with the US, and the extreme belligerence of them both against China, were convincing me that the war drums were about to accompany bombers and troops.

And I think they would have done by now had China and its allies not so skilfully outmanoeuvred the US and forced them into a significant retreat. The talks between PresidentS Biden and Xi in Bali were historic. They create an opportunity to build for peace.

While it had been obvious to the world in the lead-up to the talks that the US was doing everything it could to provoke real aggression against China, as soon as Biden opened his mouth in the public session and declared military conflict was not the US intention, a global sigh of relief could be heard.

However hard it is to believe any word a US president says, this was not a position we can condemn and we should recognise the significance of the climbdown. It is not going to be easy to renege upon quickly, and any breathing room in this febrile situation is welcome.

A number of factors had weakened Biden’s hand in negotiations. They all relate in one way or another to the fact that more countries throughout the world want peaceful coexistence between nations and multipolar political equality rather than US hegemony. China is recognised as the leading advocate of this position.

Just before the Bali talks Brazil voted for progress, so further sealing off America’s “back yard”, the North Koreans had again shown their firepower in the Asian region, and fewer countries than ever were convinced by the US calls for sanctions against Russia. Trade unionists in South Korea, the US’s vassal state in the region with potentially 3.5 million soldiers to call up, had been increasingly talking to their North Korean counterparts to campaign jointly for peace in the region.

Even the US’s beloved EU is not enamoured by the sanctions on Russia and countries like France and the Netherlands are doing all they can to wriggle out of some of the most damaging. Germany’s Chancellor visited China for talks. Given Germany’s reliance on Russian gas and need for stable trade with China you can see why. France and Germany have no interest in an escalation of US-China tensions, let alone war.

And the heroic peace movement and anti-imperialist movement in the US itself have been very well heard across the States as the economic catastrophe that is occurring there demands a domestic focus.

So the US doesn’t have the EU, the majority of countries in the world or its own people behind its plans for wider war. It has been forced to tone itself down. This has to be welcomed.

The 20th Congress of the Chinese Communist Party, held recently, demonstrated to everyone that a nation of 1.4 billion people, having raised 800 million of them out of poverty, (the likes of which we have not experienced in the West,) was now advancing to a new level. It was doing so without dominating or invading other countries.

No wonder millions of Chinese from different countries have returned to their homeland since the 1949 revolution to share in and contribute to the success, and the hundred million who travel overseas each year for work, study and family visits are keen to return.

Also before the talks Xi Jinping visited the People’s Liberation Army in battle fatigues and told them to prepare for war. It was very clear that China was strong and united and intolerant of any more threats to its sovereignty especially in relation to Taiwan.

China expressed its very powerful alternative vision of a socialist world eloquently in the talks. It is worth reading a full account of their position. But here are some key points:

“China remains firm in pursuing an independent foreign policy of peace, always decides its position and attitude based on the merits of issues, and advocates resolving disputes peacefully through dialogue and consultation.

In an important passage he took on the tedious Cold War hostility and clichés: “Freedom, democracy and human rights are the common pursuit of humanity and also the unwavering pursuit of the CPC. Just as the United States has American-style democracy, China has Chinese-style democracy; both fit their respective national conditions. The whole-process people’s democracy practiced in China is based on the country’s reality, history and culture, and it reflects people’s will. We take great pride in it.

“No country has a perfect democratic system, and there is always a need for development and improvement. The specific differences between the two sides can be worked out through discussion, but only on the precondition of equality. The so-called ‘democracy versus authoritarianism’ narrative is not the defining feature of today’s world, still less does it represent the trend of the times.”

Xi stressed that the two countries take different paths: “while the United States practices capitalism, China practices socialism. Such difference is nothing new and will continue to exist. Leadership of the CPC and China’s socialist system have the support of 1.4 billion people. They are the fundamental guarantee for China’s development and stability.

“For China and the United States to get along, it is vital to recognise and respect such difference. Neither side should try to remould the other in one’s own image, or seek to change or even subvert the other’s system. Instead of talking in one way and acting in another, the United States needs to honour its commitments with concrete action.”

In unsurprising contrast Biden’s comments and the official White House statements afterwards did not talk of peace, but of “managed competition.” In the press conference Biden said: “We’re going to compete vigorously. But I’m not looking for conflict, I’m looking to manage this competition responsibly.” Biden also raised ongoing concerns about China’s ”non-market economic practices, which harm American workers and families, and workers and families around the world.”

It remains a mystery as to what this actually means, but certainly China’s public ownership on such a large scale harms the idea that markets can run everything. Tragically the US’s lack of healthcare and reliance on markets means that out of their population of 332 million, that is just under a fifth of China’s, they have had 1.7 million Covid deaths. China has had in stark contrast only 5,226.

It is in the US’s DNA to compete, invade and promote war. A full reversal of its incredible belligerence against China will require that it stops dangerous stunts like Pelosi’s visit to Taiwan, stops the military encirclement, stops the campaign to damage strategic Chinese industries, and stops treating China as its number one enemy.

Real peace in the world requires that socialists everywhere press home the advantage that China has created in these talks, that we argue more strongly for a multipolar world respecting the self-determination of nations and the resolution of differences through dialogue and, where needed, the UN. For us in Britain we have to ensure the slavish following of US foreign policy is rejected.

We will see how things transpire in the coming new rounds of high-level diplomatic discussions between the two countries. Xi’s bilateral meetings with many countries at the G20 do indicate a thawing of attitudes and renewed co-operation.

The fact that 12 countries have formally applied to join the Brics bloc is also a major new shift. If and when they are accepted Brics nations together would have a GDP 30 per cent bigger than the US, represent 50 per cent of the world’s population and be in control of 60 per cent of its gas reserves.

These are Earth-changing developments and reflect a socialist aspiration for peace and co-operation.