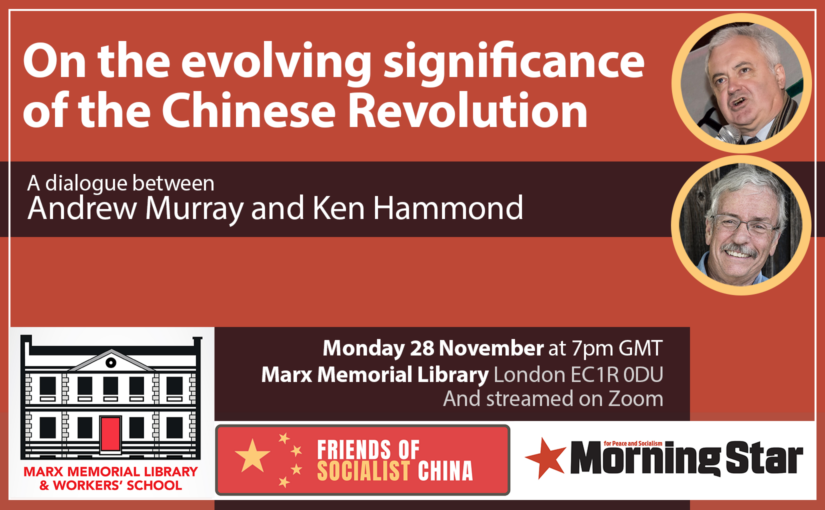 On 28 November 2022, Friends of Socialist China organised, jointly with the Morning Star and Marx Memorial Library, a dialogue between Andrew Murray and Ken Hammond on the evolving significance of the Chinese Revolution. The event, conducted both in-person at the Marx Library and online via Zoom and YouTube, was very interesting and useful, with both panelists making highly insightful remarks, and a lively discussion following the panelist introductions.

Andrew Murray is vice-president and founding chair of Stop the War Coalition, a longstanding trade unionist, peace campaigner, and one of the leading thinkers of the British left. He has written a number of books, including most recently ‘Is Socialism Possible in Britain?’, reflecting on his time serving as a political advisor to Jeremy Corbyn. Andrew has maintained an active interest in China for several decades, and has been vocal in his opposition to the New Cold War.

Ken Hammond is a professor of East Asian and Global History at New Mexico State University. He was a student organiser at Kent State University at the time of the shocking incident of 4 May 1970, when the Ohio Army National Guard shot and killed four students peacefully protesting the invasion of Cambodia when Nixon escalated the Vietnam War, and was indicted as one of the ‘Kent 25’. Ken lived and worked in Beijing between 1982 and 1987 managing activities for American educational delegations.

Ken earned his PhD in History and East Asian Languages from Harvard University in 1994, and has worked in support of friendly US-China relations for many decades. He is a founder of the US-based movement Pivot to Peace, set up in 2020 in response to the escalating anti-China rhetoric emanating from US politicians and media. He is an Associate Editor of the Journal of Chinese History, published by Cambridge University Press, and the author of several books, including From Yao to Mao: 5,000 Years of Chinese History. Over the years he has taught at universities in Beijing, Shanghai and Shijiazhuang.

The dialogue was moderated by Roger McKenzie, International Editor of the Morning Star, and introduced by Iris Yau.

One thought on “Video: On the evolving significance of the Chinese Revolution, with Andrew Murray and Ken Hammond”