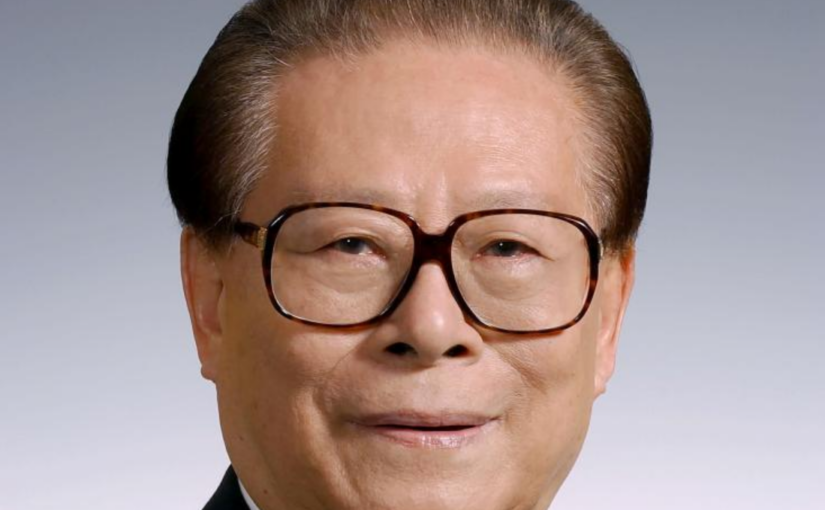 He was born on August 17th, 1926 in Yangzhou (Jiangsu province). He hailed from a communist family and one of his uncles laid down his life for the revolution in 1939.  Comrade Jiang Zemin first became active in the communist movement in 1943 and was admitted to membership of the Communist Party in 1946. Prior to liberation he worked underground in Shanghai in dangerous conditions of white terror.

Following liberation, in 1955-56, he worked and studied at the Stalin Automobile Works in Moscow. He also served as a diplomat in socialist Romania.

Comrade Jiang Zemin rose to lead the country at a critical time both for China and the socialist cause more generally. Under his leadership, despite inevitable problems, China experienced almost miraculous growth, with the economy more than tripling in size. Determined to create the best possible conditions for China’s development, Jiang devoted considerable efforts to maintaining and improving relations with the United States and other major powers. But he never hesitated or wavered when China’s security, dignity or vital national interests were challenged by imperialism, as seen in the 1995 crisis in the Taiwan Straits, the flagrant NATO bombing of the Chinese Embassy in Belgrade, when three Chinese journalists were killed in 1999, and in the 2001 Hainan spy plane incident. He devoted very considerable efforts to developing friendship, solidarity and unity with the other socialist countries – DPR Korea, Cuba, Vietnam and Laos – and also oversaw the end of colonial rule and the return of Hong Kong and Macao to the motherland.

Jiang Zemin led China to join the World Trade Organisation (WTO) at the end of 2001. Defying the critics and doubters, this bold move has served to promote China’s development, enhance its role in international economic governance and promote the general interests of the developing countries, such that the imperialist powers now increasingly seek to cast this body aside.

An erudite communist theoretician, in putting forward the Theory of Three Represents, Jiang Zemin skilfully enhanced the Communist Party’s ability to unite, organise and mobilise all sections of the Chinese people under current conditions. In announcing his death, China rightly acclaimed him as a great Marxist, a great proletarian revolutionary and a long-tested communist fighter.

Friends of Socialist China extends its deep condolences to the party, government and people of China, and to the family of Comrade Jiang Zemin, on the loss of this outstanding leader and fighter for communism.

We reprint below the official announcement released by the Xinhua News Agency. We also carry the remarks of Comrade Fidel Castro on presenting Jiang Zemin with the José Martí Order during the Chinese leader’s visit to Havana in 1993. (Note: This is an unofficial translation by the US Foreign Broadcast Information Service [FBIS].)

It was announced in a letter addressing the whole Party, the entire military and the Chinese people of all ethnic groups.

The letter says they proclaim with profound grief to the whole Party, the entire military and the Chinese people of all ethnic groups that our beloved Comrade Jiang Zemin died of leukemia and multiple organ failure after all medical treatments had failed.

The letter says that Comrade Jiang Zemin was an outstanding leader enjoying high prestige acknowledged by the whole Party, the entire military and the Chinese people of all ethnic groups, a great Marxist, a great proletarian revolutionary, statesman, military strategist and diplomat, a long-tested communist fighter, and an outstanding leader of the great cause of socialism with Chinese characteristics. He was the core of the CPC’s third generation of central collective leadership and the principal founder of the Theory of Three Represents.

China is a country with a very ancient culture. No other civilization in the world has lasted so long on the same soil. China’s contributions to knowledge and human history have been extraordinary.

Just because it is ancient, however, does not mean that China is declining. On the contrary, China is being reborn. China is beginning anew, and with greater vigor than ever in history, as an eternal China.

The most remarkable thing in that long history is the fact that China is no longer the China of the feudal lords, nor the constant victim of the aggressions of colonial and imperial powers. Henceforth, no one will be able to scorn and humiliate China.

This is the new China that emerges with the victorious national liberation struggles and the socialist revolution. Everything was forged through feats of heroism and long marches, which were exploits unsurpassable in human history. Everything was carried out under the immortal ideas of Marxism-Leninism and their wise application [words indistinct] of China.

Eternal glory to the Communist Party, to its founders and leaders, and to the heroic population capable of such a feat. Glory and honor, too, and most rightfully so, to the great revolutionary strategist, Mao Zedong.

The path China has had to travel following liberation has been long, difficult, and risky in a world where imperialism exercised and still exercises power and hegemonic influence. The Chinese Communists, as they themselves admit, also had to struggle against their own mistakes. It is up to them, not us, to judge that. What is an unquestionable and certain fact is that the Chinese people are indissolubly united around their revolutionary vanguard today. Colossal successes have been attained.

The era of disasters and famines has been left behind. Only socialism could have been capable of the miracle of feeding; clothing; providing with footwear, jobs, education, and healthcare; raising life expectancy to 70; and providing decorous shelter for more than 1 billion human beings in a minute portion of the planet’s arable land.

Thanks to such a feat at this difficult and critical time [words indistinct] for the world’s peoples, in China over one-fifth of humanity remains under the banner of socialism. China claims, and most rightfully, its right to build a socialism with Chinese peculiarities, and aspires to seeing the peaceful return of its territories of Macao, Hong Kong, and Taiwan to the nation, in compliance with international agreements, norms, and rights, adopting the intelligent and realistic principle of one nation/two systems. China is resolutely opposed to any meddling whatsoever in its internal affairs or those of any other country.

China considers itself — and this honors us — a Third World country, and is interested in the development of that Third World, as being an element essential to the progress, stability, and peace of the world of the future. These just aspirations have our full support. China is moving forward and making solid progress. This satisfies and encourages us all.

It is a great honor, Comrade Jiang Zemin, to have the friendship of the Chinese people. Your visit, which will undoubtedly go down in history as an incomparable gesture of friendship and brotherhood, is a great honor. For this reason, and for your services and faithfulness to the cause of socialism — a cause to which you devoted your life from a very early age, when the struggle against foreign occupation was still underway — our people have wished, and our Council of State has decided, to present to you our revolutionary fatherland’s highest decoration, the order that bears the beloved and immortal name of Jose Marti. Please receive it as one more proof of the feelings of admiration and affection of the Cuban people toward China, its beautiful history, and its heroic people.

Thank you very much.

2 thoughts on “Jiang Zemin passes away”