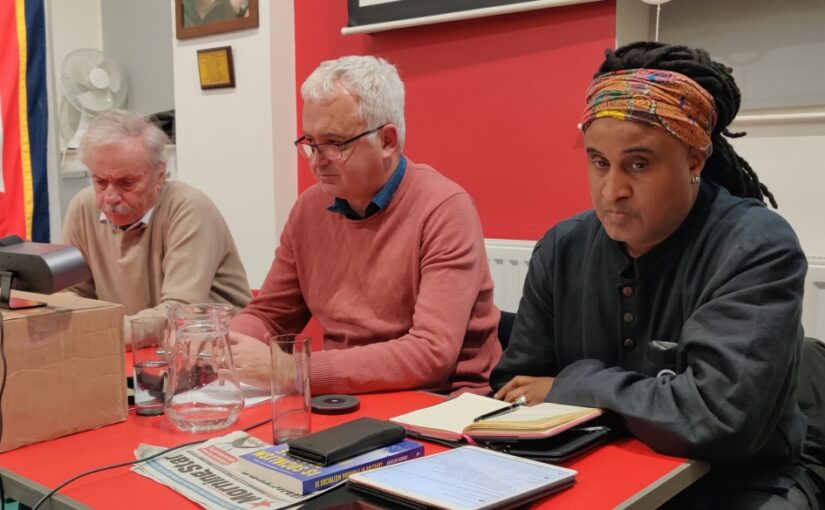 We republish below a report by Roger McKenzie for the Morning Star of the dialogue we recently co-organised on the evolving significance of the Chinese Revolution. Roger also moderated the event.

The video stream is embedded below the article.

Activists held a packed meeting at the Marx Memorial Library on Monday night to consider the “evolving significance of the Chinese revolution.”

The meeting, jointly organised by the historic library, the Friends of Socialist China and the Morning Star, heard from Ken Hammond, an activist and professor of east Asian history at New Mexico State University.

Prof Hammond said: “The Chinese revolution didn’t just flip over into some utopia of the working class. It’s a struggle. It’s going to take a long time.

“Only 6,000 people in China have died from Covid, as compared to more than a million in the US, because they have prioritised saving lives.

“The US put economic interests first and decided to let more than a million people die — because that was more profitable.”

“In China, they prioritised saving lives,” he added.

“There is no doubt that living with the lockdowns is certainly going to be frustrating for people.

“Some people will undoubtedly reach a point of frustration that they are going to take that outside in protest just at a time when the government has taken steps to ease the restrictions.”

The second speaker was writer and former Stop the War Coalition chairman Andrew Murray, who is also a Morning Star columnist.

He said: “Since the fall of the Soviet Union, we have seen China’s rise in the world.

“That rise is ending two centuries of hegemony of European and North American powers.

“China is being attacked because it threatens the unipolar world order.

“Its strength and power gives other countries choices they might not otherwise have.

“It creates the possibility of a more equal world between countries.”

A key theme of the meeting was the question of whether China is socialist or capitalist.

Mr Murray said: “These are concepts that are universal and emerged in the 19th-century industrial revolution.

“It cannot be expected that these concepts would remain the same once they were globalised and once they encountered other civilisations and cultures.

“They can only be modified to some degree or another through that process.

“If China is a capitalist country, it is not like any we have seen in the past. If it is a socialist country, neither does it correspond to what we saw during the 20th century.”

He concluded: “China is not necessarily a model for the rest of the world, but it is a new perspective on socialism.”