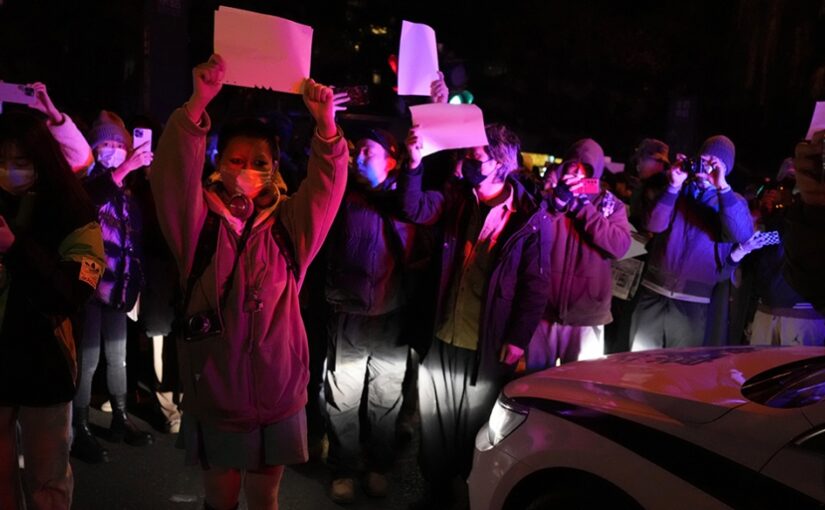 The following Morning Star editorial takes a look at the recent protests in various Chinese cities calling for an end to Covid lockdowns. The author correctly frames the discussion on China’s dynamic Zero Covid strategy in terms of its actual public health outcomes, in particular its effectiveness in preventing death. “British citizens have been 257 times more likely to die from Covid than Chinese. The fact that this disparity is treated as irrelevant by most commentators says something unpleasant about how little our society values the lives of vulnerable and elderly people.”

Clearly, China’s management of the pandemic has saved millions of lives, and yet, “to an excitable Western commentariat loyally plugging the new cold war line set in Washington, Beijing’s zero-Covid policy is evidence of its paranoid authoritarianism.” Ironically, this “authoritarian” government seems to be responding to rising popular sentiment in favour of loosening Covid restrictions by, well, loosening Covid restrictions. Readers in the West may wish their governments were so responsive to popular opposition to austerity and war.

Establishment media have seized on protests over Covid lockdowns to rehearse their favourite anti-China narratives.

Ever since the world’s first Covid outbreak in Wuhan, the virus has been used as a stick to beat China.

Donald Trump cynically portrayed the pandemic as a Chinese weapon — “the worst attack we’ve ever had on our country … worse than Pearl Harbour.”

Trump’s ravings were seldom taken seriously even by US allies. But the resurrection of the “lab leak” conspiracy theory by the Joe Biden administration made it respectable, and the judgement of a World Health Organisation scientific team, that the virus likely evolved in bats and was “extremely unlikely” to have originated in a laboratory, was howled down.

As one British member of the team complained, “it’s disappointing to spend time with journalists explaining key findings … to see our colleagues selectively misquoted to fit a narrative that was prescribed before the work began.”

Since Western governments have moved on from Covid, the focus has shifted from trying to blame China for the virus to attacking its zero-Covid policy.

Clearly resumed lockdowns are causing genuine anger in some places. The Chinese government has recognised the problems caused by a “one size fits all” approach: reminding authorities in Henan’s capital Zhengzhou for example of the exceptions that need to be made to stay-home orders and rebuking police in Anhui for over-strict enforcement of quarantine.

But Western reportage is misleading. Top billing on the BBC implies protests on a far larger scale than is actually the case: just as in 2019 when riots in Hong Kong received blanket coverage while far more serious police violence against the Yellow Vests in France was downplayed, any sign of dissatisfaction in China is exaggerated for political reasons.

China watchers have noted the role of mistranslation in attributing broader political aims to the protests: that “jiefeng” (lift the lockdown) has been rendered “jiefang” (liberate), or that calls to loosen Covid restrictions in Xinjiang have been portrayed as calls to “free Xinjiang” to reinforce Western claims of Chinese oppression in the region.

We should also look at the bigger picture. China has effectively contained Covid-19, suppressing outbreaks through rapid localised lockdowns. The result is a death rate of 10.38 per million.

The British rate is 2,668.64 per million — British citizens have been 257 times more likely to die from Covid than Chinese. The fact that this disparity is treated as irrelevant by most commentators says something unpleasant about how little our society values the lives of vulnerable and elderly people.

The limited economic impact of China’s short, targeted lockdowns is obscured by Western crowing about a slowing in China’s GDP growth rate, which seems bizarre given it still comfortably outpaces all Western economies.

Coverage rarely mentions the fact that slower growth is a deliberate part of China’s economic planning, reflecting Xi Jinping’s shift of emphasis from growth at any cost to development that limits inequality and protects the environment.

Those who dismiss these stated goals as propaganda ignore palpable evidence that they are serious: only a government prepared to sacrifice economic output for long-term sustainability would have enacted a policy such as the 10-year ban on fishing in the Yangtze river imposed last year to allow wildlife to recover, a measure that saw the authorities allocate billions to creating new employment for the 231,000 people who relied on fishing China’s biggest river for their livelihoods.

The government has repeatedly adapted its approach, and recent protests may prompt further revision. But the fact remains that by comparison with Britain or any other Western country, China’s strategy has saved millions of lives. We should be wary of mocking it or presenting our governments’ record as somehow superior.

6 thoughts on “Zero Covid and the protests in China”