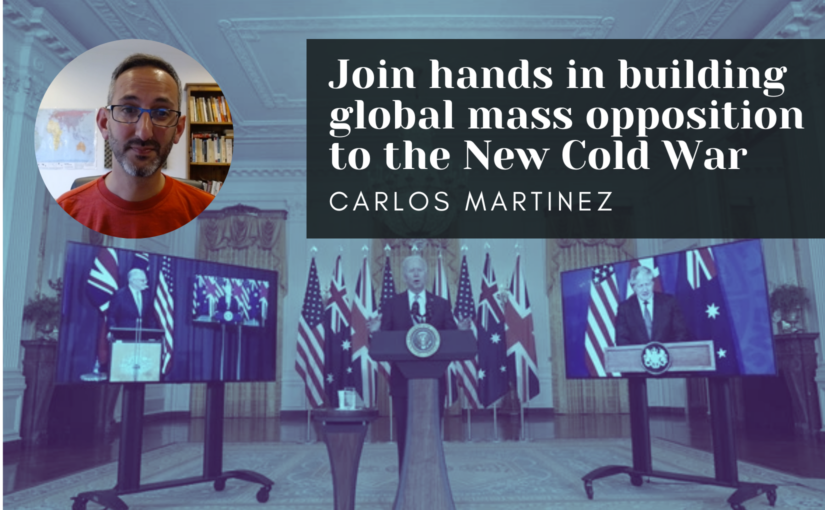 On 22 October 2022, Friends of Socialist China co-editor Carlos Martinez spoke at a teach-in organised by Hamilton Coalition to Stop War on the theme ‘Geopolitical Conflict and the Prospect for Peace’. Carlos’s remarks focused specifically on US-China relations and the various twists and turns they’ve gone through since the founding of the People’s Republic of China in 1949. Carlos describes the nature of, reasons behind and dangers associated with the escalating US-led New Cold War on China, and concludes by urging “progressive and peace-loving people the world over join hands in building global mass opposition to this insanity.”

We embed the video of Carlos’s speech below, along with the text.

I’d like to talk about the journey that US-China relations have taken over the years.

We talk about there being a New Cold War, but China was also one of the key targets of the original Cold War.

In terms of the rise of McCarthyism, the extreme militant anti-communism of the Truman administration, the genocidal war against Korea: a great deal of this was connected to the whole “loss of China” discourse. How could US imperialism just helplessly allow the most populous country in the world, of massive historical and strategic importance, to have a communist revolution, to join the socialist camp, to enter into an alliance with the Soviet Union?

One of the early acts of the Cold War was to prevent The People’s Republic of China from taking up its rightful place at the United Nations. Between 1949 and 1971, it was the so-called Republic of China – that is to say, the breakaway capitalist dictatorship in Taiwan – that represented China on the Security Council and in the General Assembly.

And for those two decades, relations between the US and China were characterised by outright hostility and an attempt by the US to blockade China – militarily, economically and diplomatically.

Then in the early 1970s, strategists in the US decided on a path of engaging with China – for a variety of reasons, including that its policy of non-recognition simply wasn’t viable, especially given the support China enjoyed among the newly-liberated countries of Africa and elsewhere. But the most important reason was almost certainly that the US thought it could strengthen its position vis-a-vis the Soviet Union, which by this point was involved in a bitter ideological split with China that lasted from the early 1960s until the late 1980s.

Kissinger visited Beijing in 1971. Nixon visited Beijing in 1972. On the last evening of Nixon’s visit, the two sides issued the Shanghai Communiqué, affirming that the US and China would work towards normalising relations and acknowledging the One China policy as the basic framework for that normalisation.

From then onwards, the trajectory of US-China relations was towards greater and greater cooperation. Sino-American relations were officially normalized in 1979. China’s economic reform and opening up created opportunities for a lot of US businesses to make fabulous profits in China. Trade volume increased from around 100 million dollars in 1972 to around 600 billion dollars in 2020. That is, it’s increased by a factor of around 6,000.

So up until around a decade ago, there was more and more friendship and cooperation. Of course, China and the US were never “allies” as such. Western media never entirely gave up on tropes about Chinese “authoritarianism”, they never stopped supporting separatist movements in Taiwan, and ultimately they never gave up on their ambition to roll back the Chinese Revolution. Certainly they’d assumed that China would go the way of the Soviet Union and the socialist countries of Eastern Europe. Certainly they had very high hopes that the Tiananmen protests in 1989 would turn into a full-scale counter-revolution.

However, all in all the relationship was characterised by a rising mutually beneficial cooperation.

That has changed quite dramatically in the last few years.

What precipitated that change?

The main thing is that China has become stronger. The West was happy to incorporate China into globalised capitalism, so long as China was content to remain at the bottom of the hierarchy, providing cheap labour to manufacture the t-shirts worn on the streets of New York, London and Hamilton.

But strategically the US has always had an eye towards preserving its position at the top of the system of international relations: what the US calls the ‘rules-based international order’, and what people who understand such matters call the US-led imperialist system.

We’re talking about the New Cold War now, but actually this was what the original Cold War was about as well. It was a system of hybrid warfare that was waged against the socialist countries and the developing world; a war to consolidate and expand US hegemony; a war to ensure a “friendly global business environment”, allowing the US capitalist class and its close allies to extract profits, to grab resources, to grab land, to develop markets, to enjoy cheap labour, throughout the world. President Truman summed it up quite well in 1947, when he said that “we can survive only if the whole world adopts the American system.”

This was the overarching rationale behind the Korean War, the Vietnam War, the coups in Indonesia, in Brazil, in Chile, in Guatemala; the support for apartheid regimes in South Africa, Zimbabwe, Angola, Mozambique, Guinea Bissau; the assassination of Patrice Lumumba; the overthrow of Mohammad Mossadegh; the blockade on Cuba; and so on.

The Cold War putatively ended in 1991 with the fall of the Soviet Union. But US ambitions of preserving, consolidating and expanding its hegemony didn’t go away. The world was supposed to be enjoying a ‘peace dividend’ following the conclusion of the Cold War, but instead we got genocidal wars against Yugoslavia, Afghanistan, Iraq and Libya. We got NATO expansion. We got AFRICOM. We’ve come dangerously close to war on Iran.

By the time Obama arrived in the White House in 2008, it was obvious that China stood in the way of the Project for New American Century.

And by now, 14 years later, it’s only more evident that China is leading the way towards a multipolar world order, and constitutes a very real impediment to the plans of the imperialists.

China’s on the cusp of overtaking the US as the world’s largest economy. In PPP terms it already has done.

China is the leading trade partner of nearly three-quarters of the countries in the world.

It’s playing the leading role in the battle against climate breakdown.

Living conditions have improved to an extraordinary degree. China’s life expectancy has now surpassed that of the US.

It’s established friendly and mutually-beneficial relationships with countries around the world, especially the Global South and those countries that refuse to go along with US diktat – including Russia, including Iran, including Cuba, Venezuela, Nicaragua, Zimbabwe, Ethiopia, Eritrea, Belarus, the DPRK and many more.

China is loudly promoting a multipolar system, in which the sovereignty of all countries is respected, where all countries have a voice; a system in which the imperialist powers can’t simply use wars, sanctions, destabilisation and economic coercion in order to impose their will on the planet.

Therefore China has become, in the eyes of the US, a threat, the number one enemy.

What we have now is an extensive strategy of containment and encirclement, which includes:

So it’s a multi-faceted attack, a hybrid war.

Many people hoped that, with the flagrantly racist Donald Trump gone from the White House, and no longer with a major platform to talk about “kung flu” and China “raping our economy”, the situation would improve.

It hasn’t. Biden has followed an essentially Trumpian position with regard to most aspects of foreign policy, US-China relations included. Biden said it clearly in one of his first speeches as president: “China has an overall goal to become the leading country in the world, the wealthiest country in the world and the most powerful country in the world; that’s not going to happen on my watch.”

Biden is continuing the trade war. He’s escalating sanctions. He’s selling more weapons to Taiwan and encouraging separatist forces there. He’s echoing the disgraceful slanders about human rights in Xinjiang. He’s launched AUKUS. He’s attempting to divide the world into countries that are, by his definition, “democratic” and those that are “authoritarian”, in order to build a tight imperialist alliance against China and Russia.

All this is leading the world in a very dangerous direction.

Humanity faces serious existential threats in the form of climate breakdown, pandemics, and the possibility of nuclear war. The insistence of the US ruling class – and this insistence, sadly, is totally bipartisan, a consensus opinion in Washington – on maintaining its global hegemony is a very serious impediment to facing those threats we all collectively face.

As such, it’s crucial and urgent that that progressive and peace-loving people the world over join hands in building global mass opposition to this insanity.