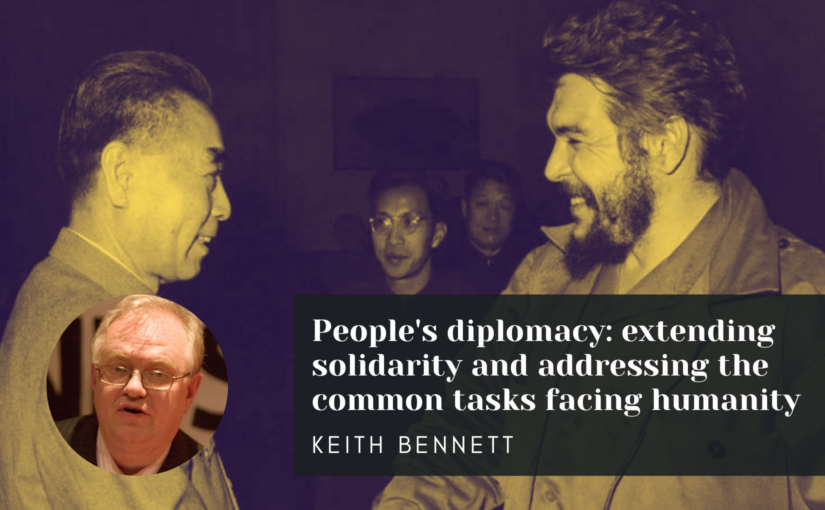 On November 15, the China NGO Network for International Exchanges (CNIE), which works under the guidance of the International Department of the Communist Party of China (IDCPC), organised an online and offline international seminar on the theme, ‘Enhancing International Civil Society Solidarity and Cooperation to Build a Better World for All’.

The seminar aimed to enable international civil society to have a better understanding of the CPC’s 20th National Congress and to contribute to the building of a community with a shared future for humanity.

FoSC Co-Editor Keith Bennett was invited to deliver a speech. In his contribution, Keith stressed that a key theme of General Secretary Xi Jinping’s report to the party congress was the need for a people-centred approach. He linked this to the concept of people-to-people diplomacy put forward by late Premier Zhou Enlai and how this related to our tasks today.

We publish Keith’s speech below. The other speakers were:

I would like to begin by congratulating the China NGO Network for International Exchanges (CNIE) for their initiative in organizing this timely meeting and thank them for inviting me to join all today’s excellent speakers in saying a few words.

It is very appropriate that we hold this event in the immediate aftermath of the Twentieth National Congress of the Communist Party of China. In an article I wrote on the eve of the Congress, I noted that, “considering China’s weight and role in the world, whether in economy, geopolitics or climate change, its decisions will impact in some way on every human being on Earth.”

I would like to highlight three quotations from the Report to the Congress presented by General Secretary Xi Jinping, which I believe set the context for our deliberations today:

“We have promoted the development of a human community with a shared future and stood firm in protecting international fairness and justice.”

“This country is its people; the people are the country.”

And: “Today, our world, our times, and history are changing in ways like never before. The historical trends of peace, development, cooperation, and mutual benefit are unstoppable. The will of the people and the general trends of our day will eventually lead to a bright future for humanity. And yet, the hegemonic, high-handed, and bullying acts of using strength to intimidate the weak, taking from others by force and subterfuge, and playing zero-sum games are exerting grave harm. The deficit in peace, development, security, and governance is growing. All of this is posing unprecedented challenges for human society. The world has once again reached a crossroads in history, and its future course will be decided by all the world’s peoples.”

There is one clear conception at the heart of all this, namely the people. And as Comrade Mao Zedong enjoined us: “The people, and the people alone, are the motive force in the making of world history.”

That is why governments and political parties have vital, indispensable roles to perform, but in the final analysis only to the extent that they serve the people and embody and represent their will and demands. As Comrade Xi Jinping noted:

“We must put the people first. People-centeredness is an essential attribute of Marxism. Our Party’s theories are from the people, for the people, and beneficial to the people. The people’s creative practices are the inexhaustible source of our theoretical innovations. Theories that are detached from the people will be feeble and ineffective, and theories that cannot deliver for the people will be stale and lifeless. We must stand firmly with the people, respond to their wishes, respect their creativity, and pool their wisdom to develop theories that they like, accept, and adopt and that become powerful tools guiding them in understanding and changing the world.”

Today, human society is facing changes unseen in a century. For the first time in humanity’s long history the abolition of poverty and want is not an aspiration but a practical proposition and indeed a necessity. At the same time, humanity is faced with three existential challenges and threats, namely the threat of nuclear conflagration, the threat of climate catastrophe and the threat of zoonotic pandemics. At the same time, the vast number of countries in the Global South face the common challenge of development. And sustainability is a challenge that faces us all.

Governments alone cannot eliminate these threats or meet these challenges. Nor can any single country. It requires the people of the world to join hands in a common struggle on the basis of equality and amity.

This is where civil society and NGOs have a vital role to play. In the recent period these two terms have become somewhat ubiquitous. But they are really new terms for an older concept. And here I believe, Chinese wisdom and Chinese experience has something to teach us.

Throughout his long and distinguished career guiding the diplomacy of New China, Premier Zhou Enlai pointed out that there were three key strands to the diplomacy of the People’s Republic: Government-to-Government; Party-to-Party; and People-to-People. Each had their indispensable role to play. They are distinct but of course deeply interconnected and mutually reinforcing and complementary. Today, when we speak of the role of civil society and NGOs on an international level, what we are essentially referring to is the people-to-people diplomacy championed by Premier Zhou.

This school of diplomacy actually predates the founding of the People’s Republic as it met the practical necessity of a party administering extensive and increasingly stable liberated areas and playing a significant role in national and international political life, not least in the context of the war of resistance against Japanese aggression, itself a key component of the global anti-fascist war, but which, for obvious reasons, was precluded from forming official diplomatic relations. The people-to-people bonds forged at that time still constitute a solid foundation of people’s diplomacy.

This theory and practice was naturally further developed after Liberation. Although it was a long struggle for the People’s Republic to win universal diplomatic recognition, China was never isolated. The popular saying, “We have friends all over the world” had, and still has, real content and meaning.

From 1949-71, China and the United States of America had almost no official contacts or dealings with one another. Moreover, the United States government put one impediment after another to its citizens so much as setting foot in China. Yet people like Edgar Snow and Dr. WEB DuBois had the courage to break the ice and lay a solid foundation for US-China people’s friendship. When it was finally announced that President Nixon was to visit China, China’s prestige among progressive people in the United States was at its height, from revolutionary organisations like the Black Panther Party and the political organisations collectively known as the New Communist Movement, through bodies like the Committee of Concerned Asian Scholars, to progressive personalities like the famous actress Shirley McLaine, who wrote so enthusiastically of her China visit in her memoir, ‘You can get there from here’, or young table tennis players with shoulder length hair like Glenn Cowan.

One problem that those of us in major capitalist countries like Britain have to frankly face and seriously address is that in many respects the kind of well-meaning people in our countries who half a century ago tended to look with sympathetic interest and even ardent admiration to the People’s Republic are today all too often swayed, deceived and misled by some of the vile lies and slanders being directed at the world’s leading socialist country. This is all the more regrettable in that, even more so than in the past, the People’s Republic today increasingly articulates the only viable, practical and necessary answers and solutions to the common problems facing humanity being advanced by any major power.

I believe we all have to face up to this deficit seriously and soberly. With the direct care and attention of Comrade Xi Jinping, and guided by Xi Jinping Thought on people’s diplomacy, China’s NGOs and civil society are playing an ever more proactive, dynamic, constructive, and broad-minded role on the world stage, not only defending China’s national interests, but also extending solidarity and addressing the common problems and tasks facing humanity.

We in the Western countries also need to step up and play our part. Such was some of the thinking that led a small group of us in Britain and the United States to set up Friends of Socialist China last year. We did so both to defend China from imperialist attacks, but equally because our own people desperately need to know the truth about China, to understand how it has resolved, and is resolving, its problems, and the reality of its stupendous achievements, from the elimination of extreme poverty to leading the world in sustainable energy and renewables. Our people need to know this so that we can live in peace abroad and better fight to create and build a better society at home.

In all this, we greatly value the friendship, collaboration, and support of the China NGO Network for International Exchanges, all our friends and comrades in China, and the Chinese people as a whole.

Thank you again for your invitation and for your attention.