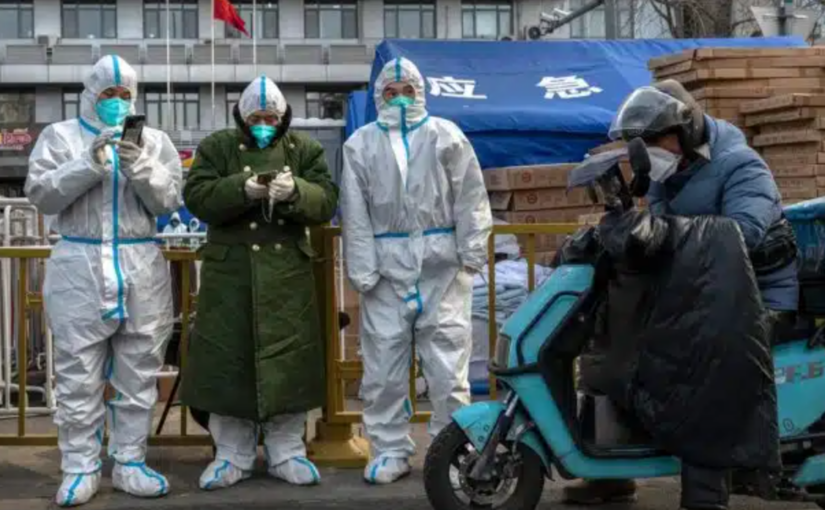 The following article by Scott Scheffer, originally published in Struggle/La Lucha, assesses the hypocritical and purposefully disingenuous reporting in the Western media regarding the recent Covid protests in China.

Scott points out that several outlets are guilty of massively exaggerating the scale of the protests in order to paint it as an emerging “color revolution”. In truth however, “this brief series of protests was not the mass uprising against the leadership of China that the US capitalist class and their loyal media salivate over.”

The author recognizes that, in spite of China’s unparalleled success in mitigating the effects of the pandemic and keeping the number of fatalities remarkably low, after almost three years there is now a level of frustration in relation to some of the more severe Covid measures, particularly lockdowns, mandatory quarantine and daily PCR testing. Indeed, the government has been gradually rolling out policy updates that reflect both the shifting mentality and the evolution of the virus itself. These policy changes were announced even before the recent tragedy in Urumqi, which was a key trigger for the protests.

Scott rightly concludes that “socialist planning and science saved tens of millions of lives in China and will keep China on the right path as the virus ebbs and flows.”

The opportunism of the major U.S. media was on full display in late November over the protests against China’s anti-COVID lockdowns. The protests began in the Xinjiang city of Urumqi after a terrible fire took the lives of 10 people on Nov. 24. People in the district responded to the tragedy by protesting the lockdown that had gone into effect after a COVID outbreak in late summer.

The protests occurred in somewhere between 15 and 20 cities, including Beijing and Shanghai. The numbers reported by the U.S. press were purposely vague. The liberal PBS claimed thousands in a Nov. 29 headline and then “tens of thousands” in the article. Some reports indicated hundreds in Shanghai, and many pieces didn’t estimate crowd size at all.

For context, there are about 60 cities of a million people or larger in China, and about 20% of the world lives in China. So even if the claim by PBS of “tens of thousands” is true, this brief series of protests was not the mass uprising against the leadership of China that the U.S. capitalist class and their loyal media salivate over.

Hoping the protests would mark the beginning of their long-desired “color revolution” in China, the U.S. media’s elation got the best of them and led to the overblown coverage. But the hyperventilating reportage wasn’t limited to slander. There are reports of Western journalists using Telegram channels to guide “activists” from Hong Kong and Taiwan to the locations of some of the protests.

When the “color revolution” failed to materialize, their giddy predictions gave way to another distortion of the facts. They claimed the CCP is being pushed by the momentum of the protests to ease its COVID policy, which they claim is the result of Xi’s authoritarianism and his desire to always be correct regardless of consequences.

Their omission of the fact that President Xi Jinping had already signaled a relaxation of the “Zero COVID” measures a full two weeks before the protests broke out was not an error. It was imperialist media policy.

The decision to announce adjustments to the Zero COVID policy in a major speech by President Xi on Nov. 11 is only one indication that the national leadership of China was cognizant of the fact that people’s patience was exhausted.

Even before the Nov. 11 speech, it was clear that national authorities were trying to address a gap between the thinking of national health officials and the officials in some provinces using a one-size-fits-all approach to lockdowns. The website of Friends of Socialist China reports that national officials reminded “authorities in Henan’s capital Zhengzhou … of the exceptions that need to be made to stay-home orders” and rebuked “police in Anhui for over-strict enforcement of quarantine.”

Moving toward a relaxation of quarantine times and lockdowns shows that China’s battle against COVID is based on not only physical science but also social science. From the beginning of the outbreak, it was meant to be a dynamic approach that would adjust based on the ever-changing characteristics of the virus and even on differences between locations.

Even if greatly exaggerated by the U.S. press, the tragedy in Urumqi brought frustrations to the surface after three years of dealing with the pandemic. But that doesn’t mean there is broad dissatisfaction with the leadership of the campaign against COVID.

On the contrary, what was smeared in the Western media as extreme has limited the number of deaths in China to just over 5,000. Moreover, the success of the “People’s War” against COVID, with widespread testing, lockdowns, and quarantines as essential elements, is nothing short of astounding compared to major capitalist countries. With quadruple the population, the Chinese death toll is 200 times less than the more than 1 million deaths in the U.S.

China’s sustained policy of lockdowns was unique in the world. It was borne out of necessity and likely saved millions or tens of millions of lives. After more than a hundred years of being ravaged by colonizers and then imperialist countries, the physical health of Chinese people was among the priorities of the 1949 revolution.

China was weak and sick. When Mao Zedong declared that “the Chinese people have stood up!” foremost on his mind must have been bringing the health of a giant, poverty-stricken nation up to par. Britain and France had waged war to force opium on the Asian giant, and opium addiction was widespread. Diseases that were inexpensive to treat and, in many cases, eradicate were rampant at the time of the revolution.

China’s campaign of “barefoot doctors” headed to the countryside. Hospitals were constructed. But bringing a nation of hundreds of millions of people back to health isn’t an overnight process.

While China is now on its way to achieving a higher GDP than the U.S., it is still a developing country, and building a complete healthcare system is an ongoing process. When COVID emerged, China still had only 4 ICU beds per 100,000 people.

Even though health care has improved dramatically over the seven decades, the availability of ICU beds was, and is, inadequate for dealing with COVID. During February 2020, the severe symptoms of the original Delta variant quickly overwhelmed hospitals. That hurdle had to be overcome, and China’s leadership and people swung into action.

Some 10,000 volunteer medical workers from all over the country traveled to the areas hit hardest by the virus. Emergency, makeshift hospitals were constructed at speeds the world had never seen. Given the highly transmissible feature of the virus, and as-of-then unavailable treatment, widespread testing, quarantine, and lockdowns emerged as the best plan to prevent catastrophic death rates. Early on, China’s scientists shared the DNA of the virus with the world and then developed vaccines that protect from severe symptoms and death. The campaign to continue vaccination — especially among the elderly — is ongoing.

COVID-19 has tested the world’s healthcare capabilities more than anything in living memory. Socialist planning and science saved tens of millions of lives in China and will keep China on the right path as the virus ebbs and flows. Socialism must be the future.

3 thoughts on “Zero Covid: Don’t be deceived by US reports on the protests in China”