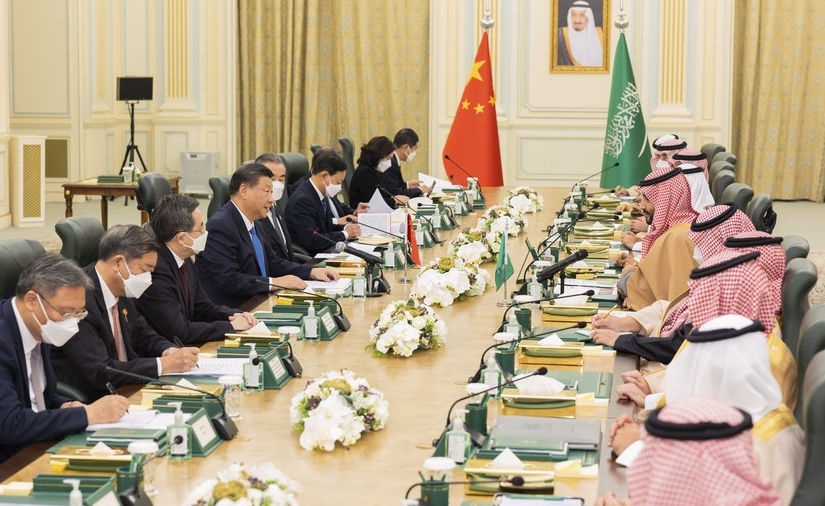 In the below article, originally published on Mint Press News, journalist and author Dr. Ramzy Baroud, Editor of the Palestine Chronicle, takes a critical look at western perceptions and media coverage of President Xi Jinping’s visit to Saudi Arabia and the China-Arab Summit last week. He notes how most of the media analysis tends to be short-sighted and focused on the concerns of western governments. This means that both Chinese and Arab diplomacy is perceived as being simply reactive to western policy and actions as opposed to having its own agenda and agency. As a result, its assumptions are “either half-truths or entirely fabricated.”

China-Arab relations, Ramzy notes, are predicated on the Five Principles of Peaceful Coexistence, which are “founded on an entirely different paradigm” compared to the colonial and latterly neo-colonial practices of the West. They are deep-rooted and well established, and are not based on “knee-jerk political reactions to the attitude of a single American President or administration.”

The problem with most Western media’s political analyses is that they generally tend to be short-sighted and focused mostly on variables that are of direct interest to Western governments.

These types of analyses are now being applied to understanding official Arab attitudes towards Russia, China, global politics and conflicts.

As Chinese President Xi Jinping prepares to lead a large delegation to meet with Arab leaders in Saudi Arabia on December 9, Western media conveys a sense of dread.

The Chinese leader’s visit “comes against the backdrop” of the Biden Administration’s “strained ties with both Beijing and Riyadh” over differences, supposedly concerning “human rights and Russia’s invasion of Ukraine,” Reuters reported.

The same line of reasoning was parroted, with little questioning, by many other major Western media sources, falsely suggesting that ‘human rights’, along with other righteous reasons, are the main priority of the US and Western foreign policy agenda.

And, since these analyses are often shaped by Western interests, they tend to be selective in reading the larger context. If one is to rely exclusively or heavily on the Western understanding of the massive geopolitical changes around the world, one is sure to be misled. Western media wants us to believe that the strong political stances taken by Arab countries – neutrality in the case of war, growing closeness to China and Russia, lowering oil output, etc – are done solely to ‘send a message’ to Washington, or to punish the West for intervening in Arab affairs.

Seen through a wider lens, however, these assumptions are either half-truths or entirely fabricated. For example, the OPEC+ decision to lower oil output on October 5 was the only reasonable strategy to apply when the global market’s demand for energy is low. Additionally, Arab neutrality is an equally reasonable approach considering that Washington and its Western allies are not the only global forces that matter to the Arabs. It is equally untrue that the Middle East’s growing affinity with Asia is borne out of recent dramatic events, but a process that began nearly two decades ago, specifically a year following the US invasion of Iraq.

In 2004, China and the Arab League established the China-Arab States Cooperation Forum.

CASCF officially represented the Chinese government and all 22 members of the Arab League, eventually serving as the main coordination platform between China and the Arabs. This has given China the advantage of investing in a collective strategy to develop trade, economic and political ties with the entirety of the Arab world. On the other hand, Arabs, too, had the leverage of negotiating major economic deals with China that could potentially benefit multiple Arab states simultaneously.

An extremely important caveat is that CASCF was predicated in what is known as the “Five Principles of Peaceful Coexistence.” Based on the Westphalian norms of state sovereignty, the five principles seem to be founded on an entirely different paradigm of foreign relations, compared to the West’s approach to the Middle East and the Global South, in general, extending from the colonial periods to the neocolonialism of post-World War II: mutual respect for “territorial integrity and sovereignty”, “non-aggression”, “non-interference”, and so on.

Chinese-Arab relations continue to follow this model to this day, with very little deviation. This validates the claim that collective Arab political attitudes towards China and Xi’s visit to the Middle East are hardly an outcome of any sudden shift of policies resulting from the Russia-Ukraine war of recent months.

This is not to suggest that Arab and Chinese relations with the US and the West had no impact on the nature of the speed of Chinese-Arab ties. Indeed, the Chinese model of ‘peaceful coexistence’ seems to challenge the henceforth modus operandi at work in the Middle East.

In 2021, China announced projects to build a thousand schools in Iraq, a piece of news that occupied substantial space in Arab media coverage. The same can be said about China’s growing economic – not just trade – influence in Arab countries.

China’s lucrative Road and Belt Initiative, announced in 2013, fits seamlessly into the political infrastructure of Arab-Chinese ties, which were built in previous years. According to the Asharq Al-Awsat newspaper, Riyadh was the largest recipient of Chinese investments within the BRI during the first half of 2022.

Starting in March, Saudi Arabia agreed in principle to sell its oil to China using the Chinese yuan instead of the US dollar. When implemented, this decision will have irreversible repercussions on the global market but also on the future status of the dollar.

Assuming that such mammoth changes in global geopolitics were an outcome of the immediate need for the Arabs to ‘send a message’ will continue to impair the West’s ability to truly appreciate that the changes underway, not only in the Middle East but worldwide, are part of permanent shifts to the world’s political map. The sooner the West achieves this realization, the better.

Considering all of this, it would be unfair – in fact, misguided – to suggest that large political entities like China and Arab countries combined are shaping their foreign policy agendas, thus staking their futures, on knee-jerk political reactions to the attitude of a single American President or administration.