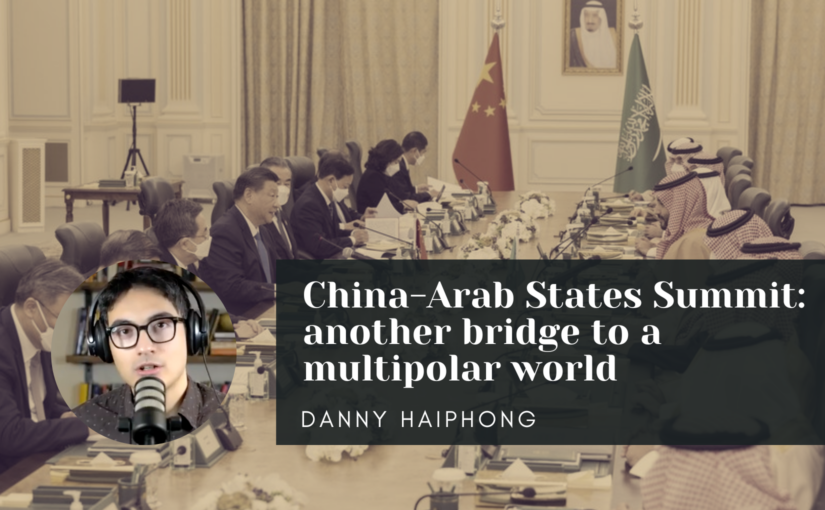 At this moment of history, the world finds itself in a great deal of turmoil. U.S. and NATO escalations in Ukraine have facilitated an energy crisis in Europe, worsened the inflation crisis globally, and contributed to the horrors of military conflict. Arab states are familiar with this state of affairs.

For more than three decades, U.S. and Western governments exploited the post-Soviet world order to enforce unilateralism and unipolar hegemony in the Middle East. Their interventions in several Arab-led nations devastated the lives of millions and left the region unstable.

While much of the world is seeking an off-ramp for the conflict in Ukraine, Arab states are seeking to ease their reliance on U.S.-led unipolarity. China is a natural partner in this regard. The success of socialism with Chinese characteristics is in large part due to an emphasis on sovereignty. China has managed to both integrate into the world economy and peacefully assert the right to pursue its own development path. This has not only led to significant achievements in poverty alleviation and technological growth but also to an unprecedented degree of political stability.

Multilateral arrangements such as the Belt and Road Initiative (BRI) and the Shanghai Cooperation Organization (SCO) are part of China’s commitment to sharing its successes and building a community with a shared future with nations around the world. The China-Arab States Summit has taken a major step forward in this direction. Saudi Arabia and the Gulf Cooperation Council (GCC) countries are rich in natural resources and are seeking to diversify their economies to meet major development goals.

It is important to note that Saudi Arabia was a leading force in organizing the China-Arab States Summit. Saudi Arabia and many Arab states have grown increasingly weary of one-sided relations with the U.S. and Western countries. U.S. President Joe Biden, for example, has sought to leverage its partnership with Saudi Arabia for geopolitical aims.

Biden’s Saudi Arabia visit was just one example of many where Arab states have faced external pressure and interference to serve U.S. interests. Partnership with China does not come with such strings attached. China’s strict adherence to non-interference in the affairs of other countries means that Arab states can develop ties that emphasize mutuality rather than zero-sum politics.

This doesn’t mean that China doesn’t promote specific principles, however. What it means is that China seeks diplomatic and mature exchanges with Arab states to achieve not only economic development aims but also resolution to complicated issues such as the future of Palestinian sovereignty.

In other words, Arab states can trust China’s word that it will not interfere in the internal affairs of the region. Such trust is incredibly important in a moment when the world is experiencing shock waves of crisis due to NATO escalations in Ukraine and the U.S.’s increasingly hostile posture toward China.

Multipolarity has only become more attractive under these conditions as more countries seek the peace and stability necessary to advance development. By choosing to deepen their partnership with China, Arab states are building and strengthening the bridge toward a multipolar world.

Some U.S. media and political officials have claimed China is seeking to divide the Arab world against the U.S. for geopolitical ambition. Nothing could be further from the truth. Once again, the U.S. is attempting to scapegoat China for its own diplomatic and foreign policy failures.

China has not directed Arab states or any other country to reject U.S. relations. Arab states willingly engage with China in pursuit of their own sovereign goals. China respects their self-determination while also seeking relations that will help it achieve its own development goals.

This is the basis for win-win cooperation. Burning bridges only offers a path to destruction. Building them is a key pillar of world peace and stability. The China-Arab States Summit provided a fruitful exchange in building another bridge to a multipolar world. U.S. political leaders could learn much from the diplomacy that took place in Riyadh between China and its Arab partners and begin looking into how to rebuild the bridges that it burning with much of the world.

One thought on “China-Arab States Summit: another bridge to a multipolar world”