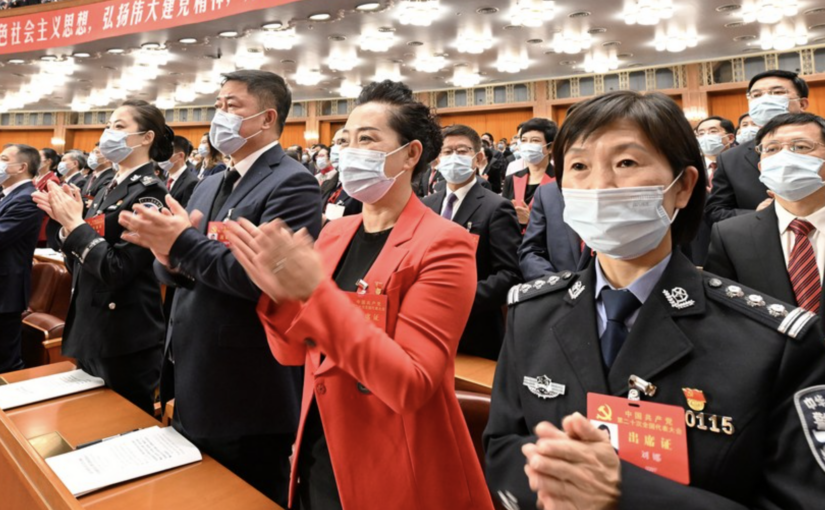 We are honored to publish below the text of the speech by Ms Wang Yingchun, Deputy Director-General of the Bureau for North American, Oceanian and Nordic Affairs, International Department of the Communist Party of China (IDCPC), given on 17 December at the second of two online seminars on the theme ‘The 20th National Congress of the Communist Party of China and its World Significance’, organised jointly by Friends of Socialist China and IDCPC.

Comrade Wang Yingchun’s speech provides an inspiring summary of the major decisions, themes and achievements of the 20th Congress, and outlines the CPC’s positions on issues of global importance – particularly the pursuit of world peace and security, and putting sustainable, sovereign development at the center of the international agenda. The decisions of the Congress reflect the CPC’s resolute opposition to hegemonism and Cold War, and its commitment to respectful and mutually-beneficial relations on the basis of international law and the Five Principles of Peaceful Coexistence. China seeks “to be a pillar of global progressive forces and inject strong positive energy into safeguarding world peace on its new journey to fully build a modern socialist country.”

Good morning! I’m delighted to join you in this webinar. As old friends of China and experts on China, all of you have been following China and the CPC for a long time. I believe you’ve had deep understanding of the 20th CPC National Congress. Last weekend, I attended your online exchanges with Professor Liu Genfa of CELAP and Professor Qu Bo of China Foreign Affairs University. It is inspirational.

The significance of the 20th CPC National Congress is self-evident. My colleagues and I are still in the process of studying. I think it can be understood from the following perspectives:

From the history of the CPC, the Congress was held at a crucial moment when our Party has successfully completed its century-long struggle and embarked on another journey to take new tests. For the CPC, the largest Marxist party of government in the world, moving from one century to the new one is a very important historical juncture.

From the course of the new era of socialism with Chinese characteristics, the Congress was convened at an important moment as the first decade of the new era came to an end and the second has begun. It has outlined the strategic plan for building China into a great modern socialist country. All the Party members and the Chinese people have high expectations and high hopes from the Congress.

Internationally, the Congress takes place at a critical time when the world is undergoing profound changes unseen in a century and the international situation is becoming more volatile. How our Party responds to the situation, creates new opportunities and breaks new grounds will not only have bearings on China’s reform and development in the future, but also on world peace and development.

Next, I would like to share some of my observations around the theme of this event, “The 20th CPC National Congress and its world significance”.

People all over the world long for peace, so does the Chinese nation for more than 5000 years. When Zheng He led what was then the world’s largest fleet to make seven maritime expeditions going as far as the South Seas and across the Indian Ocean (the Western seas) more than 600 years ago, he brought silk, tea and porcelain instead of war, colonization and plunder. China always believes that all countries, big or small, strong or weak, developed or otherwise, should uphold and promote peace.

General Secretary Xi Jinping proposed the Global Security Initiative, stressing that security is the prerequisite for development and mankind is an inseparable security community. He calls for a vision of common, comprehensive, cooperative and sustainable security. We advocate that all sides should adhere to mutual respect and consultation on an equal footing, bridge differences through dialogue and resolve disputes through negotiation. We oppose hegemonism and power politics in all forms. We have decided our position on the merits of matters, pushed for the political settlement of hotspot issues, be it the Iranian nuclear issue, the Korean Peninsula nuclear issue or Afghanistan issue. And we have been playing a constructive role in the Ukrainian crisis in our own way. We stand firmly on the right side of history and on the side of human progress. China has actively promoted international security cooperation and sent more than 50,000 personnel to UN peacekeeping operations. China is the second largest contributor to UN peacekeeping and the largest contributor of peacekeepers among the permanent members of the UN Security Council.

The report of the Congress solemnly declares that China firmly pursues an independent foreign policy of peace and that “taking the road of peaceful development” is one of the five features of Chinese modernization. I believe comrades here will agree that China’s development is a growing force for world peace. China has always been a builder of world peace and will never seek hegemony or expansion. This is the solemn political commitment of the CPC. We are confident that China, the world’s second largest economy with a population of over 1.4 billion, will continue to be a pillar of global progressive forces and inject strong positive energy into safeguarding world peace on its new journey to fully build a modern socialist country.

The Congress has offered new opportunities for common development

Development is the eternal theme of human society and the top priority of the CPC in governance and in rejuvenating the nation. In the new era, we have continued to promote all-round material abundance as well as people’s well-rounded development, and created two miracles, namely rapid economic growth and long-term social stability. Over the past decade, China’s GDP has grown from 54 trillion yuan to 114 trillion yuan, contributing about 30 percent to global growth on average annually, more than the combined contribution of the G7 countries. Thus, China becomes the primary driving force for world economic growth. We have built the world’s largest education, social security, and healthcare systems, and Chinese average life expectancy has risen to 78.2 years. We have won the battle against poverty, lifting nearly 100 million people out of absolute poverty and contributing 70 percent of the global poverty reduction.

We have worked hard to put development at the center of the international agenda. General Secretary Xi Jinping put forward the Global Development Initiative to accelerate the implementation of the UN 2030 Agenda for Sustainable Development and achieve stronger, greener and healthier global development. We have promoted high-quality Belt and Road cooperation and signed cooperation documents with 149 countries and 32 international organizations. The Belt and Road Initiative has become a popular international public good and a platform for international cooperation, providing a strong driving force for global development. More importantly, the great achievements China has made in economic and social development over the past 10 years have successfully promoted and expanded the Chinese modernization, created a new form of human advancement, provided other developing countries with valuable experience and set a successful example, and offered humanity a new choice for achieving modernization. The Congress has outlined an ambitious blueprint for advancing the rejuvenation of the Chinese nation on all fronts through a Chinese path to modernization. We will adhere to the fundamental national policy of opening-up and adopt high-quality opening-up to help create a new development pattern and achieve high-quality development. China will provide new opportunities for the world with its own development. We will input more resource for global development cooperation, remain committed to narrowing the North-South gap, and firmly support and help other developing countries accelerate their own development.

The Congress has injected new impetus to win-win cooperation

As we meet, the world has entered a new phase of instability and transformation, with geopolitical tensions overlapping with the evolving economic dynamics. The COVID-19 pandemic keeps resurging. The global economy faces mounting downward pressure and growing risk of recession. Food, energy and debt crises are emerging together. The Cold War mentality, hegemonism, unilateralism and protectionism are mounting. Human society is facing unprecedented challenges, when no country can stand alone. This requires all countries to pull together in times of difficulty, replace division with unity, confrontation with cooperation and exclusion with inclusiveness, accommodate the legitimate concerns of others while pursuing their own interests, and promote common development of all countries while pursuing their own development.

China is committed to the belief that the future of the world lies in the hands of all countries that international rules be written by all countries, that global affairs be managed by all countries, and that the fruits of development be shared by all countries. China is both a strong voice and practitioner of win-win cooperation. Over the past decade, we have worked hard to build a community with a shared future for mankind, firmly upheld international fairness and justice, advocated and practiced true multilateralism, and unequivocally opposed all hegemonism and power politics, and all acts of unilateralism, protectionism and bullying. As a responsible major country, we have taken an active part in the reform and development of the global governance system, and carried out comprehensive international cooperation in the fight against COVID-19, which has won widespread international acclaim.

Since the 20th CPC National Congress, the world has witnessed a wave of China’s “head of state diplomacy”. General Secretary Xi Jinping met with many visiting leaders of foreign countries and international organizations, and attended the G20 Summit, the APEC Economic Leaders’ Meeting, the first China-Arab States Summit, and the first China-Gulf Cooperation Council (GCC) Summit. He has been vigorously promoting global governance, setting comprehensive vision for regional cooperation, and ushering in a new era of comprehensively deepening bilateral and multilateral relations. This fully demonstrates China’s strategic choice and firm confidence in working with other countries to meet global challenges and strengthen solidarity and coordination. On its new journey, the CPC will strengthen exchanges and cooperation with political parties and organizations of other countries on the basis of the principles of independence, complete equality, mutual respect and non-interference in each other’s internal affairs. China will continue to develop friendly cooperation with other countries on the basis of the Five Principles of Peaceful Coexistence, promote the building of a new type of international relations, deepen and expand global partnerships of equality, openness and cooperation, and strive to expand converging interests with other countries.

China has been and will always be a defender of the international order. We stand ready to strengthen solidarity and cooperation with other progressive forces in the world and jointly create a better future for mankind.

The 20th CPC National Congress has outlined an ambitious blueprint for China’s future development. On the new journey, we will unswervingly continue to uphold and strengthen the overall leadership of the Party, adhere to Marxism and follow the path of socialism based on our national conditions, so as to safeguard and deliver the fundamental interests of the people and make new and greater contribution to the noble cause of peace and development of mankind. A China that continues to modernize itself will provide more opportunities for the world, inject greater impetus into international cooperation and the world socialist movement, and make greater contribution to the progress of mankind!

On the journey ahead, we are also ready to maintain exchanges and cooperation with you, true friends of China, Chinese people and the CPC.