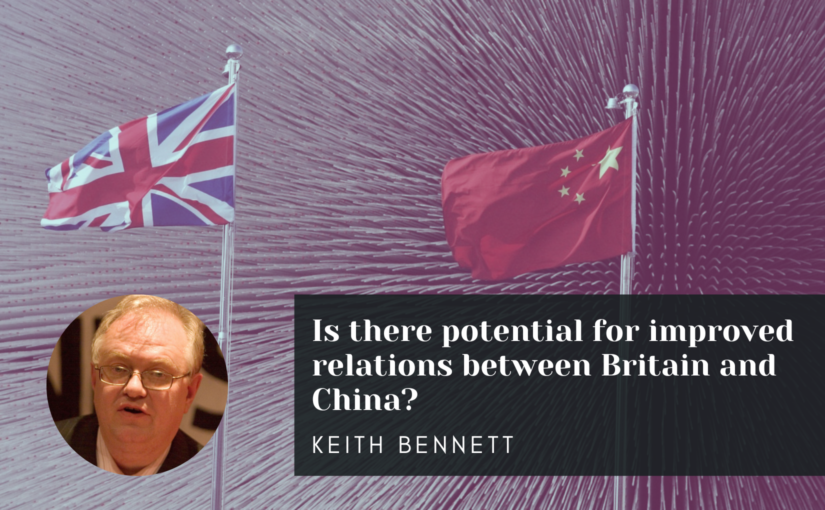 The following Op-Ed by our Co-Editor Keith Bennett was originally published by China Daily and was excerpted from a long conversation with their reporter Xing Yi.

In the article, Keith assesses the current prospects for relations between Britain and China, following Rishi Sunak’s first major foreign policy speech as Prime Minister, in which he claimed that China presented a “systemic challenge” to the values and interests of the UK and advanced the ambiguous concept of “robust pragmatism”.

According to Keith, Brexit has left the British ruling class even more tightly aligned with the United States, which is presently in the grip of a McCarthyite new cold war hysteria. That and the increased right wing grip on a bitterly divided Conservative Party constrains Sunak’s freedom to manoeuvre. Despite this, the Prime Minister managed to dial down some of the more extreme cold war rhetoric (his ill-fated and hopeless predecessor Liz Truss was intent on labelling China with the even more incendiary designation of a threat) and acknowledged the need for a degree of engagement with the world’s second-largest economy. Previously, as Chancellor, Sunak had advocated a business-like relationship with China and had attempted to resume the two countries’ Economic and Financial Dialogue.

The United Kingdom’s latest Prime Minister Rishi Sunak recently declared that the “golden era” for the UK’s relations with China was over and he defined China as a “systemic challenge” to values and interests of the UK.

This was not surprising given that the dominant political thinking in most Western countries with regard to China is currently hostile, driven by a new McCarthyism fueled by the United States. The UK is a victim of this poisonous mindset.

With the current cost-of-living and energy crisis worsening and a looming recession ahead, it would be logical for the UK to take a more constructive attitude toward China, instead of following the US lead in trying to contain China.

However, since UK imperialism has been in a state of slow and managed decline over the last century, the mainstream thinking has been that the UK could best maintain its position in the world by being closely aligned to the US, and so it sought a “special relationship”.

This, for example, was reflected at the time of the Iraq War, when then prime minister Tony Blair stated pretty clearly that the UK had to be on the side of the US, almost as though the country had no choice.

Brexit has worsened the situation, as much of the drive for Brexit came from people who are most strongly pro-US and don’t want to be aligned with European countries such as France and Germany.

With the UK now out of the European Union, the United States is the only pillar that’s left for the UK to cling to, and a hostile foreign policy toward China is a natural outcome of this.

Some pro-US people in the UK have tried to disguise this by saying that after leaving the EU, the UK would become “Global Britain”. But a “Global Britain” strategy that doesn’t embrace China, the second-largest economy in the world, is a crazy and meaningless strategy.

But there was some positivity in Sunak’s first major foreign policy speech that he gave at the Lord Mayor’s Banquet, as the prime minister dialed down the simplistic Cold War rhetoric against China, and acknowledged China’s significance in world affairs, from its contributions to global economic stability and on issues such as climate change.

This is different to the hard line adopted by much of the Conservative Party, and hinted at a willingness to restart at least the economic and financial dialogue with China, which, in my view, rightly identified the UK’s interest in having a reasonably good relationship with China.

In outlining the government’s vision to face competitors with the ambiguous term “robust pragmatism”, Sunak is trying to please two camps — the hardliners on the right of the Conservative Party, who want to push the anti-China policy, and the business community, who still want to have a good relationship with China.

The emergence of rightwing populism has already led to an unprecedented gap opening up between business and the Conservative Party, which has always been considered the party of business.

The rightwing of the Conservative Party is very ideologically driven and has a different view of how Britain should get out of its economic crisis, which boils down to its intensifying the attack on ordinary people and going back to the discredited trickle-down economics, which was taken to an extreme during Liz Truss’ short-lived tenure as prime minister.

Sunak’s experience as former chancellor means he better understands the economic realities facing the country, and as a former fund manager working with Goldman Sachs, his natural inclination is probably to promote ties, recognizing that despite the different values between UK and China, the UK can’t afford to ignore the second-largest economy in the world.

As Sunak said, “We’ll mange this sharpening competition including with diplomacy and engagement.” I suggest in dealing with China there should be a return to a grownup diplomacy, which the UK used to be quite good at in all fairness. Government ministers could make a start by putting an end to the insults and incendiary and inappropriate language for a start.

Second, the government should come to the realization that whether they like China or not, as one of the great powers in the world, China is here to stay. Therefore, if we’re not going to go to war, then we have to find ways to get along.

Third, since we have different ideologies and systems, we should understand that a lack of knowledge and understanding never benefits anybody. And we have a big China knowledge deficit in the United Kingdom right now — so few people in Britain learn the Chinese language and I don’t think there’s much China expertise in academia.

Both the UK and China are permanent members of the United Nation’s Security Council, so neither should have an interest in turbulence or conflict in the world, and obviously there are issues such as climate change that concern everybody, and which the two countries need good relations to work together to address.