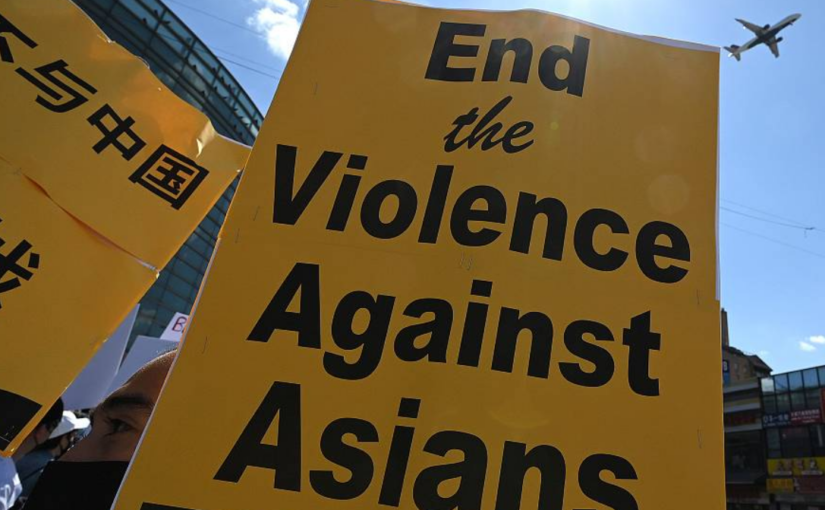 We are pleased to publish below the text of the speech by an activist from the Goldsmiths Anti-Imperialist Society, given on 17 December at the second of two online seminars on the theme ‘The 20th National Congress of the Communist Party of China and its World Significance’, organised jointly by Friends of Socialist China and the International Department of the Communist Party of China.

The speech focuses on the problems faced by minority communities in Britain, particularly people of Chinese descent in the context of a rising New Cold War, linking the recent rise in anti-Asian racism to the ‘yellow peril’ narrative pioneered in Britain in the 19th and 20th centuries – part of a campaign of demonisation connected to Britain’s attempts to impose colonial domination on China. Today’s anti-Asian racism represents “the imperialist legacy of the Yellow Peril in the 21st century, propagated by the New Cold War.” In spite of these problems, the speech concludes on an optimistic note, observing that there is a “growing number of young people who are fighting back against the propaganda that seeks to divide us and isolate us from each other”. This generation is building a united front based on opposing racism, imperialism and capitalism, and stands “in solidarity with our Chinese comrades and all our siblings in the Global South in self-determining and working together to create a fairer, multilateral world.”

I would like to use this opportunity to thank Friends of Socialist China and the Communist Party of China for hosting this meeting here today. My speech is from the perspective of an activist in anti-racist collectives. When I refer to the term ‘black’ in this speech it is used as an umbrella term referring to African, Asian, Arab, Caribbean and all non-white communities.

As a member of the Chinese diaspora, a British Born Chinese, it brings me great joy to speak with you all, though the topics of what I will be sharing will not be so joyous. In sharing my lived experience and material analysis of the current socio-political environment, I hope to share insight on what it is like to live as a Chinese in Britain and the impact of anti-China rhetoric on Asian communities.

After the murder of George Floyd, the Black Lives Matter movements that emerged around the world highlighted the institutional racism embedded in every aspect of western society, from how the media portrays Black children in negative, stereotypical ways to how the police brutalise Black people. Institutional racism towards Asian communities is perhaps not as overt as it is towards our African and Caribbean siblings but it is equally as insidious.

Racism against Asian communities has relied on the same vestiges of Yellow Peril that never left British shores after it arrived on the coattails of the Opium Wars almost two centuries’ ago. This “Yellow Peril” is the fear of the East – the anxiety that the so-called Orient was coming to colonise and conquer the West in the same way it has done. Historically, the Yellow Peril was enshrined in law such as the Chinese Exclusion Act in the US and Home Office policies that led to the deportation of Chinese seamen in Liverpool, UK. How many of us here know that 6 Chinese seamen survived the sinking of Titanic? Now Chinatowns are bustling hubs of culture and commerce. But there was a time when some Chinatowns were formed as self-contained protective enclaves against the tides of white supremacists intent on driving Asian immigrants out of their jobs.

For a while, the concept of the “model minority myth” has acted in counter to the yellow peril: quelling fears of Asian world domination with stereotypes of the typical Asian being smart but submissive, adept at assimilating, unthreatening to the white worker. Though it may seem harmless at first glance, Asians have been required to fulfil the role of the quiet, unassuming worker in order to be accepted as legitimate citizens. But this acceptance has been conditional. The Asian diaspora lives in the duality of being the Yellow Peril or the Model Minority. When the Asian diaspora has fought back or challenged anti-China, anti-Asian rhetoric, they – we – are no longer seen as friends but foes. Spies, saboteurs, traitors to the state.

When the Covid pandemic hit in 2020, this awoke the dormant beast of Yellow Peril once more. It became acceptable to spread vitriol, fake news, and disinformation as long as the precedent was set that there was no blame to be placed on the British state or the UK government for mismanagement of the pandemic.

Instead of reflecting inwards on how it could have handled the pandemic better, the British state opted to blame China for its failure to curb the early waves and with the mainstream media’s help, made China culpable for the deaths of hundreds of thousands in the UK. This was internalised by the general public.

It has been heartbreaking to hear the firsthand stories of academics like Dr Peng Wang being assaulted by gangs of young people; students attacked on the streets and on university campuses for resisting Cold War rhetoric; even Confucius Institutes under threat of being closed as a result of unsubstantiated paranoia of Chinese influence. I, myself, have been spat on and cursed on the streets – pressured to disown my heritage and disassociate myself from China — and my own family’s home has been the target of numerous crimes over the years.

Let me be clear: this is the result of systemic, institutionalised racism. This is the imperialist legacy of the Yellow Peril in the 21st century, propagated by the New Cold War.

Studies have shown that 76% of Chinese people in the UK have experienced racial abuse of some kind. According to the British Asian community organisation End Violence and Racism, which was formed in the wake of the pandemic when anti-Asian hate crimes were at an all time high, Britain’s East and Southeast Asian communities have seen a 300% increase in hate crimes over the past 2 years. There now exists a helpline called On Your Side which seeks to support East and Southeast Asian individuals who experience discrimination, abuse, or other ostracisation because of their Asian ethnicity. Other community organising groups such as Stop Asian Hate UK have hosted multi-racial demos against racism and sinophobia, only to be met with hostility and shouts of “China virus” by members of the white British public. But this is the reality of the New Cold War mentality. It harms those in the Chinese motherland and those in the diaspora. Whether it’s sanctions on technology companies or scapegoating of British-Chinese nationals like Christine Lee, no-one can escape this tool of imperialism.

What can be done to combat this? One cannot ignore the fact that there is a distinct lack of Chinese voices in Britain’s mainstream media despite the constant slurry of headlines about China. CGTN was perhaps one of the only platforms willing to offer balanced reporting from the Chinese perspective. But last year, Ofcom revoked China Global Television Network’s broadcasting licence with the excuse that it was due to CGTN’s editorial ownership. This came after allegations that CGTN was being too partial with the Chinese government on the issue of protests in Hong Kong. Without CGTN, there are even fewer choices of media to turn to. Often jokingly termed the “British Brainwashing Corporation”, the BBC as an institution, through BBC News, continues the pretence of impartiality and fairness while it entertains conspiracy theories about Wuhan lab leaks and makes headlines out of uncredible anonymous sources with bizarre stories on China.

The fact of the matter is that the British state cannot comprehend how China has risen so quickly on the world stage without resorting to colonialism and conquest. It cannot accept that a country it once occupied and subjugated is now superseding its own dwindling Empire. The 20th National Congress has demonstrated this. For me, China’s pathway towards socialism with Chinese characteristics is one that is enviable and makes me proud to be Chinese. Because it is a crying shame that as we sit here today, 14 million people in the UK – the country where many of us in this call live – are in abject poverty. This winter, more than 3 million are going without heating in sub-zero degree temperatures. And yet China – China with 800 million plus lifted out of poverty – is deemed to be the problem.

But there is hope.

The multipolar world is emerging from the global south. We who are part of the diaspora of these communities have an opportunity to raise our voices against the criminal legacy of imperialism and its ideological weapon, racism, here in the west. There is a small but growing number of young people, who are fighting back against the propaganda that seeks to divide us and isolate us from each other.  Following principles of socialism and anti-imperialism, we see it as our duty to build alliances where others see fault lines and form a united front no matter our differences. We take Comrade Mao’s axiom of “no investigation, no right to speak” seriously and endeavour to combat disinformation whenever we come across it.

We will not stand with the United Kingdom’s government when it chooses to follow its partner in crime, the United States, in waging the New Cold War on China. We will not support the British government’s deployment of battleships in the South China Sea nor the calls to impose sanctions and trade embargos on Chinese products. We will be in solidarity with our Chinese comrades and all our siblings in the Global South in self-determining and working together to create a fairer, multilateral world.