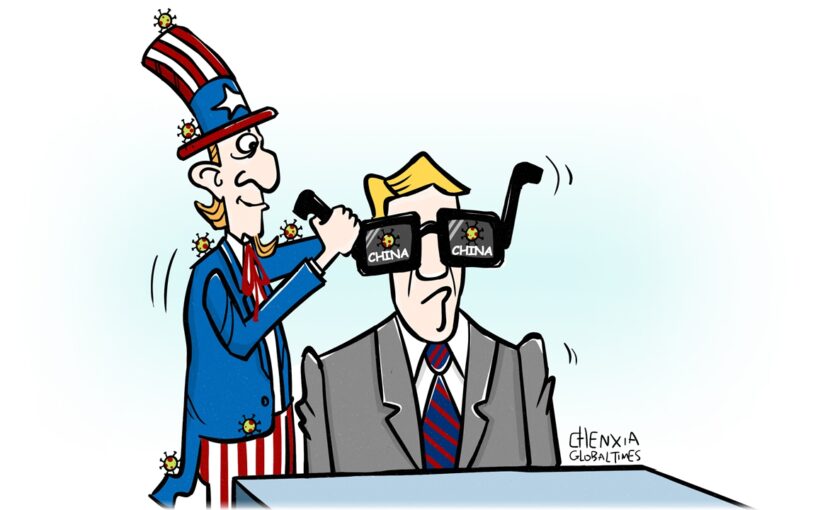 In this insightful article for Global Times, Friends of Socialist China advisory group member Ken Hammond provides an overview of China’s evolving strategy for dealing with the Covid-19 pandemic – a strategy that has saved literally millions of lives to date.

Ken also discusses the extraordinary hypocrisy of the Western media’s portrayal of this strategy. For almost three years of Dynamic Zero Covid, “terms like ‘draconian’ were constantly used to criticize China’s measures to control and contain the virus”. Now restrictions have been loosened and “China is denounced for recklessly endangering its people and the rest of the world” – in spite of the fact that “governments in America and Europe have effectively abandoned any efforts to deal with the pandemic over the past year.”

The author makes the important point that this hypocritical reporting is part of a broader campaign of demonization – a reflection of rising anger among the US ruling class as all hopes fade away that China might be subjected to a ‘color revolution’ and become “a compliant, subordinate component of the American-dominated global capitalist order.” Ken opines that the relentless China-bashing is the product of a social class that has come to fear “the loss of the power and privileges they have so long enjoyed based on the extraction of wealth from working people around the planet.”

This demonization campaign creates a dangerous situation, fomenting conflict and standing in the way of the development of cooperation and understanding. People who support peace and progress should firmly oppose the propaganda war on China.

China’s COVID policies have saved millions of lives over the past three years. Yet those policies were attacked by some Western politicians, media pundits, and academics every day. Terms like “draconian” were constantly used to criticize China’s measures to control and contain the virus. China’s achievements in managing the epidemic were unmatched anywhere in the world, yet an ordinary citizen of a Western country can have very little idea of that given the relentless demonization of China to which they are regularly exposed.

Now, in the context of new scientific understandings of the latest variants of the virus, and in an effort to balance the ongoing need to protect the lives of the Chinese people with the goal of carrying forward the development of their economy, a new set of policies and practices is being implemented, relaxing many of the restrictions and controls which have been used over the last three years. One might expect that this would be welcomed in the West, yet quite the opposite has been the case.

China is now denounced for recklessly endangering its people and the rest of the world, even as governments in America and Europe have effectively abandoned any efforts to deal with the pandemic over the past year. Well over 1.1 million people have died in the US. The same media voices, like the New York Times, Washington Post, Wall Street Journal, or The Guardian, which railed against China’s so-called “oppressive” COVID policies, now spout a steady stream of condemnation of China’s efforts to pursue a more flexible, adaptive COVID policy package.

This kind of China-bashing is of course not limited to the topic of COVID policies. From the White House and Congress, the print and electronic media, and even many of the halls of academia, the consistent message being sent to the American people is that everything China does is bad. China is portrayed as “a land of oppression,” where people live in fear and dare not speak a word critical of the government. We are told that China is aggressive and expansionist. Recent pronouncement by the head of NASA even suggested China plans to take over the moon!

Sadly, for most Americans or other Westerners the pronouncements of politicians and pundits are their only sources of information about China. Few ordinary people in the West read or speak Chinese, and even fewer have any regular access to Chinese publications or have contact with people in China.

The US government has been pursuing several efforts to further restrict any flow of information about China not under its control. The Confucius Institutes which had brought opportunities for Chinese language study to tens of thousands of young people across the country have almost all been forced to close by pressure on their host universities from the Department of Defense and the State Department. The Department of Justice has been launching high-profile investigations of both Chinese scholars working at American research universities and at other American scholars and scientists who have research contacts or connections with Chinese academic institutions. Many of these cases fall apart before they reach the courts, but they generate scare headlines and serve to intimidate the broader academic community.

Both the demonization of China, the relentless criticism of China’s policies and behavior regardless of their actual content and results, and the suppression of information and knowledge about the realities of life in China, are reflections of the fear and anger among American elites which has characterized their response to China’s reemergence as a significant participant in global affairs. As China’s economy has grown and its people have achieved a modest degree of prosperity while pursuing the long-term goals of socialist construction, the economic and political elites of the US and its closest allies have been frustrated in their hopes that China would undergo a kind of “color revolution” in which it would change the nature of its system and become a compliant, subordinate component of the American-dominated global capitalist order.

As it has become clear that China is following its own path, and that it refuses to be integrated into that order or to allow the interests of private capital to override those of its people, these elites have come to fear the loss of the power and privileges they have so long enjoyed based on the extraction of wealth from working people around the planet. This is the motive behind their actions, and creates a dangerous situation for ordinary people in China, in America, and around the world.