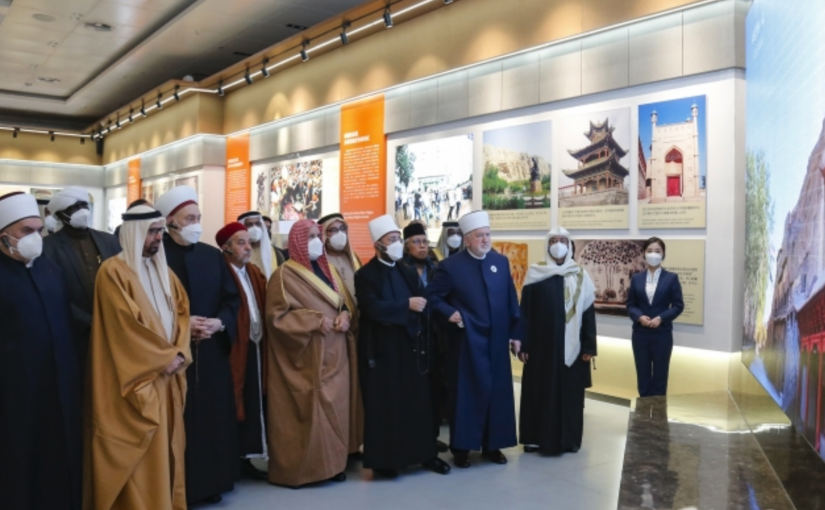 The following Global Times article is based on an interview with Emirati scholar Ali Rashid Al Nuaimi, chairman of the World Muslim Communities Council, following a recent delegation he led of more than 30 Islamic figures and scholars from 14 countries to Xinjiang Province.

Outlining the motivation for the visit, Al Nuaimi points out that there is gross misrepresentation of Xinjiang – and of the situation of Muslims in China generally – in the mainstream media. “I thought it’s very important for the Muslim world to understand what is happening in the Xinjiang region, as seeing is believing.”

Al Nuaimi stated that Muslims in China enjoy freedom of religion, and noted that a Muslim and Chinese identity coexist comfortably. He also spoke highly of the constantly improving standard of living in Xinjiang.

Countering the narrative of Chinese “concentration camps”, Al Nuaimi talks about his visits to technical colleges on this trip and on a previous trip in 2019. He speaks favorably of these colleges, saying they play an essential role teaching training and preparation for the job market. “I am an academician. I visited most of the universities in North America and Europe and their colleges and technical centers. They don’t have this for their youth. I wish that what we have seen today was available in all countries.”

He concludes by urging the people of Xinjiang to ignore the slanders hurled by Western politicians and journalists. “They criticize China because they want to slow or undermine your achievements and your development.”

Led by Ali Rashid Al Nuaimi, chairman of The World Muslim Communities Council from the UAE, a delegation including more than 30 Islamic figures and scholars from 14 countries visited Northwest China’s Xinjiang region starting on January 8. They went to mosques, the Xinjiang Islamic Institute, bazaars and many other places to communicate with local residents and religious groups in Urumqi, Altay and Kashi and to get a better understanding of the region’s development and protection of religious freedom.

On the last day of their visit in Kashi, Al Nuaimi was interviewed by Global Times reporters Liu Xin and Fan Lingzhi (GT). He shared his views on the current situation in Xinjiang and the smearing campaign led by a small group of countries to attack China on Xinjiang-related issues.

GT: We’ve noticed that this is not your first visit to Xinjiang. Are there any specific reasons for you to make this trip?

Al Nuaimi: When I visited this region in 2019, I was with a small delegation from the UAE only. I thought it’s very important for the Muslim world to understand what is happening in the Xinjiang region, as seeing is believing. This is why I invited many colleagues from different countries to come and join the visit. I can see the difference and the development that’s happening here.

Yesterday we visited the old town in Kashi. We saw the market, we saw the people on the street, we engaged with them. We saw how people are enjoying a lifestyle, enjoying the development and you can see their happiness and their smiles.

Things are improving. It is very important for the Muslim world and the world to understand that the people here are Chinese and they are part of China. And the government is taking good care of them. You wish that the citizens in Europe and other countries would have the same care and the same services.

We live in a small world. Because of globalization, because of the internet, because of the challenges that we face as humanity, the world has become like a small village. We should take care of each other. And we should work together. And everyone should understand that the world needs a secure, stable and developing China, because of the role that China has played in the world and the influence of what the Chinese are doing on the world economy, especially in underdeveloped countries. It is crucial for all of us to understand this.

And this is why it’s very important to get the right message to the world. Engaging with people will create bridges of trust, of respect, and also later on of cooperation – this is in the best interests of the world.

It’s very important for the elites in every nation, those wise people to come forward and speak up. We need to work as a family, as human beings, for the best interests of us all.

Al Nuaimi: I will describe the region with the words “developing” and “harmony.” There is harmony between the people in terms of different ethnic groups and also the coexistence of different values. You can see that in the streets. This is the most impressive part for me.

GT: The delegation visited mosques, Islamic institutes and many other places in the region during the trip. What’s your comment on the local government’s efforts in protecting residents’ freedom of religion?

Al Nuaimi: First of all, many members of the delegation were not aware that the Chinese constitution calls for freedom of religion. Now they know it.

They started to understand the importance of the integration of Muslims in China within the whole system, within the nation. This is in the best interests of Muslims, to be integrated with the community, to interact with them, to share the responsibility as a citizen about the nation and play their role in the development of China.

I think it’s very important to understand that Muslims – not only in China, but also in many other countries – should be part of these countries. The sovereignty of these nations should be respected according to the international law. And Muslims in China are Chinese citizens. We should respect that.

China is moving in the right direction in development. We need to understand it. We need to respect the choice of the Chinese people on their system and to engage with them.

GT: Some countries are using topics related to religion to attack China. What is their real purpose?

Al Nuaimi: There are things that we should not solve with political differences or with political agendas, such as religion, terrorism, climate change or poverty. These are challenges that we are facing everywhere. The problem is that when politicians are engaged with religion, they spoil it.

Terrorism is not a threat to a single nation or a single region; it is a threat to the world. We will not be able to counter terrorism unless we are together. Because especially with the internet and with social media, terrorism is moving from one continent to another. Terrorists don’t respect international law.

GT: What do you think about the Xinjiang region’s deradicalization efforts?

Al Nuaimi: You always measure the quality of any program by the outcome. If you want to know how effective the program is, look at the outcome.

Since 2016, there have been no terrorist attacks in the Xinjiang region. That is a great achievement and that proves what has been done here actually led to the right result and the right outcome.

GT: The delegation visited a technical college in Kashi. Some Western media reports alleged that such technical schools in the Xinjiang region are “camps.” What’s your comment on this?

Al Nuaimi: I visited some technical centers in 2019. I am an academician. I visited most of the universities in North America and Europe and their colleges and technical centers. They don’t have this for their youth. I wish that what we have seen today was available in all countries.

Because here you see how you are taking care of the youth by first providing them with the right education, with the right training, and preparing them for the job market.

It’s a great achievement. What’s happening here is something that the world needs to learn from. And I encourage you to share it, not only with those who criticize China now but also to share it with your friends in Africa, in Latin America and in Central Asia. They need these things to solve many challenges that they are facing in their society.

GT: But the US and some Western countries do not see these as achievements and have criticized China for these centers.

GT: We have noticed after the delegation’s visit was reported in recent days, some people in the West are criticizing you and the delegation. What do you think about this criticism?

Al Nuaimi: We have to do what we are doing. We should have the courage to speak loudly of what we believe.

GT: How about criticism from Western countries?

GT: Is there anything you want to say to Xinjiang residents and Chinese people and the outside world?

Al Nuaimi: I want to say to Xinjiang is congratulations on your achievement. The world needs you to focus on serving your national security, national prosperity, so make sure that you don’t engage or listen to those who want to undermine the development of China or those who criticize China. It’s not because of what China is doing; they criticize China because they want to slow or undermine your achievements and your development.

We need China. We need a secure, stable, and prosperous China. This is in the best interests of us all.