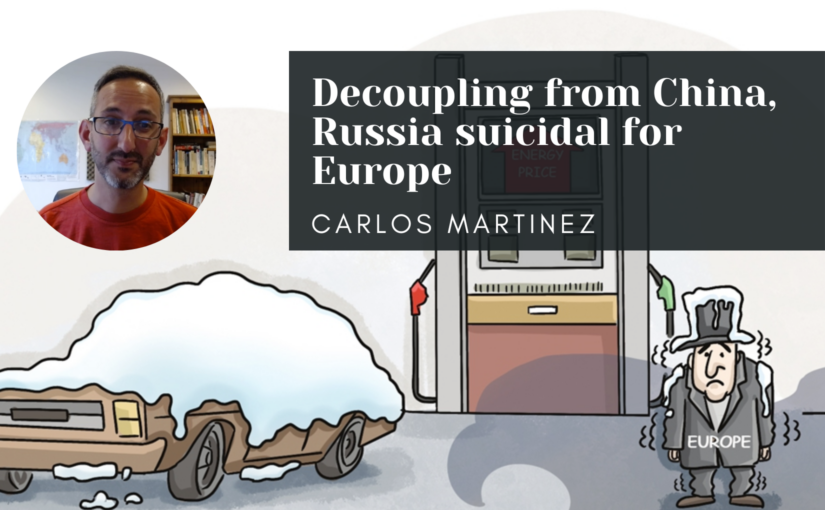 This article by Friends of Socialist China co-editor Carlos Martinez, originally published in Global Times, discusses the record of the Biden administration in ramping up Cold War hostilities against China and Russia, and its attempts to get Europe on board with its strategy for protecting US hegemony. Carlos points out that “Anti-Russia and anti-China positions are harming the people of Europe”: sanctions on China’s semiconductor and solar energy industries are utterly self-defeating, and sanctions on Russian energy are feeding directly into a very serious cost of living crisis. He concludes that “the countries of Europe would be well advised to exercise foreign policy independence and to make decisions based on the needs of their own populations, which are calling out for peace, prosperity and a sustainable future.”

When Joe Biden was elected in November 2020, many around the world were hoping for a change of course in the US’ reckless new Cold War.

US-China relations have always been complex and difficult; yet from the early 1970s onward, the trajectory had been toward deepening economic cooperation and a nuanced handling of the contradictions immanent in the relationship. Even with the Obama-Clinton “Pivot to Asia,” which signaled the US’ shift in geostrategic focus toward China containment, there was still significant and productive cooperation between the two countries – most notably in the drafting of the Paris Agreement.

Donald Trump came to power with a promise to stop China “raping” the US economy. Blaming China soon became the new magic wand for explaining away the problems of US capitalism without having to deal with any of the real underlying causes of American decline. Singaporean academic and former diplomat Kishore Mahbubani noted that, rather than blaming China for everything, living standards in the US might improve if America stopped fighting unnecessary foreign wars and used its resources to improve the well-being of its people.

The Trump team initiated a trade war, imposed a ban on Huawei, and sought to ban TikTok and WeChat. They aimed to generate mass anti-China sentiment by engaging in flagrant racism, most infamously blaming the coronavirus pandemic on China. They introduced sanctions and issued disgraceful slanders. So it was assumed that surely, things would only get better under Biden.

Two years after his inauguration, any hopes that peace-loving humanity may have had in Biden have long since been dashed. The Biden administration has continued the trade war, repeating Trump’s talking points about China’s alleged “coercive and unfair” trade practices and its “abuses of the international system.” Biden has deepened sanctions, undermined the one-China principle, and doubled down on unwarranted slanders regarding China’s human rights record.

US House passed defense bill with billions in military financial assistance to the island of Taiwan each year. The Biden administration has launched the AUKUS pact with Australia and Britain, and has been encouraging Japan’s rearmament.

One of the current US administration’s first priorities was to undermine the historic investment deal agreed by China and the European Union in December 2020. The deal is currently in a state of limbo – unable to be ratified by the European Parliament.

Meanwhile, the US has massively ramped up its aggressiveness against Russia. In the months leading up to the launch of Russia’s special military operation against Ukraine in February last year, the US and NATO doggedly refused to discuss Russia’s legitimate security concerns. Indeed, in December 2021, Biden assured Ukrainian President Volodymyr Zelensky that Kiev’s bid to join the NATO military alliance was in its own hands.

The US has consistently stood in the way of peace over the last year, providing Ukraine with vast quantities of heavy weaponry and discouraging it from engaging in meaningful dialogue with Russia. Meanwhile it has imposed unprecedented sanctions on Russia, attempting to cut it out of SWIFT — the global messaging network for international payments — and frozen $30 billion of Russia’s sanctioned assets with its allies. The G7 countries have imposed a price cap of $60 a barrel for Russian oil, more or less equal to the cost of production. Germany has been cajoled into suspending the Nord Stream 2 pipeline.

Anti-Russia and anti-China positions are harming the people of Europe. Once ratified, the EU-China investment deal, or Comprehensive Agreement on Investment, will provide a substantial boost to the European economy, creating jobs and profits. Sanctions against China’s semiconductor and solar energy industries are utterly self-defeating. Meanwhile the sanctions on Russian energy are feeding directly into a very serious cost of living crisis. Energy and food prices have gone through the roof. Britain’s inflation is running at over 10 percent, which means that wages are declining rapidly in real terms.

The Guardian columnist Simon Jenkins described sanctions against Russia as “the most ill-conceived and counterproductive policy in recent international history.” Europe’s so-called decoupling from China and Russia amounts to economic suicide — which is why Germany is already starting to roll back on its commitment to a new Cold War, and why Olaf Scholz was the first G7 leader to visit Beijing since 2020.

During the Cold War, following the US’ lead in foreign policy became a habit for European countries. The collective “West” shared a great deal in terms of culture and ideology, and its commitment to defeating the socialist world outweighed the natural rivalry that exists between capitalist powers. But the world has changed, and a multipolar world has become an inescapable reality. As Professor Jeffrey Sachs, director of the Center for Sustainable Development at Columbia University, wrote recently, “We have already entered a multipolar world, in which each region has its own issues and role in global politics. No country and no single region can any longer determine the fate of others.”

The countries of Europe would be well advised to exercise foreign policy independence and to make decisions based on the needs of their own populations, which are calling out for peace, prosperity and a sustainable future.

2 thoughts on “Decoupling from China, Russia suicidal for Europe”