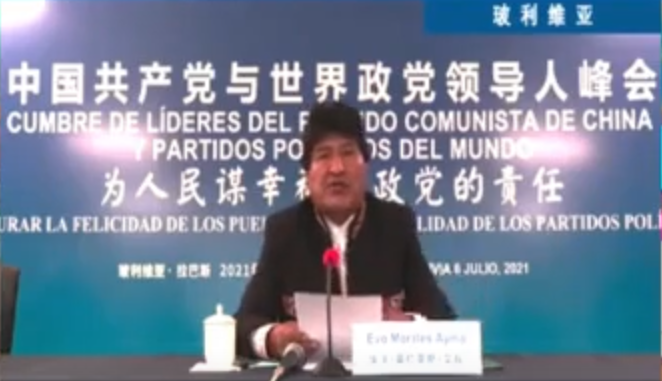 The following is the text of a speech given by Evo Morales, former president of Bolivia and leader of the Movement to Socialism – Political Instrument for the Sovereignty of the Peoples (MAS-IPSP), at the CPC and World Political Parties Summit held on 6 July 2021. Translated by Carlos Martinez.

Greetings to brother Xi Jinping, general secretary of the Communist Party of China and president of the People’s Republic of China, and to the presidents and leaders of the political parties of the world.

On this day of enormous importance for the Chinese people, commemorating the 100th anniversary of the founding of the Communist Party of China, I send a revolutionary salute in the name of the Movement to Socialism – Political Instrument for the Sovereignty of the Peoples (MAS-IPSP) and of the Bolivian people.

Sisters and brothers, China is more than 17,300 kilometres from my country. But this distance has not been, nor is it now, an obstacle to deepening our ties of brotherhood and cooperation. Even more, the Plurinational State of Bolivia and the People’s Republic of China maintain a relationship characterised by wide-ranging and diverse cooperation and reciprocity, which in the course of 36 years of diplomatic relations have allowed for the development of political trust, economic complementarity and mutual learning.

As a trade union leader, I have always admired the revolution which China carried out over the course of decades – a revolution which has made huge achievements, improving the lives of 1.4 billion Chinese people.

For example, in February, China officially announced that it had lifted 770 million rural inhabitants out of extreme poverty, meaning that China represents more than 70 percent of the global figure for poverty reduction.

The policies of Socialism with Chinese Characteristics have put China on the road to becoming the largest economy in the world; an economy that works in a joined-up way with other countries and benefits the peoples of the world; the opposite to that which was imposed on us for decades by the US, in which predatory, individualistic and competitive capitalism looted our people’s resources for the benefit of transnational corporations.

China’s commitment to multilaterialism, to international law and to the United Nations is extremely important in facing up to global challenges.

The pandemic shows us how connected we are and how fragile life is. The current challenges such as the climate crisis and global inequality can only be resolved on the basis of truly global coooperation.

Furthermore, I want to highlight the impetus and the spirit of global cooperation that China projects through its Belt and Road Initiative, which will help to lift millions of people out of poverty in the participating countries.

Overcoming distances is a priority to strengthen our economies. It’s for this reason in South America that we have planned (along with China) the construction of the Central Bi-Oceanic railway, which will connect the Atlantic coast with the Pacific coast.

Sisters and brothers, on this important date, I want to thank the government and people of China for their solidarity with our country from the beginning of the pandemic. Up to now, we have received 2.7 million vaccine doses, and soon 6 million doses will follow, helping us to contain the Covid-19 virus. We are sure that only the unity of the peoples will allow us to overcome this global crisis.

The Movement to Socialism – Political Instrument for the Sovereignty of the Peoples, like the Communist Party of China, has demonstrated that it can govern with honesty, dignity and sovereignty, without submitting itself to the interests of the US empire. At 13 years, 9 months and 18 days, our democratic cultural revolution has brought about a social, political and economic transformation without precedent in the history of Bolivia. We have nationalised our natural resources. We have recovered the strategic companies for the benefit of the people. As a result, we have been able to reduce extreme poverty from 38.2 percent to 15.2 percent.

And we can continue enumerating more achievevements of the democratic and cultural revolution. These achievements benefit older people, professionals, youth, children, and run counter to the interests of the national oligarchs, who did not want a government which met the needs of the people.

Sisters and brothers, on 10 December 2019, radical right-wing groups, organised and financed by the US and its allies, perpetrated a coup in my country in order to gain control over our natural resources. This led to the formation of a de facto government which oversaw a rise in racism and intolerance towards the indigenous community and towards the poorest sections of Bolivian society.

But thanks to the conscience and unity of the people, on 18 October 2020, the MAS-IPSP consolidated itself as the largest political force in the history of Bolivia. Our brother Lucho Arce was elected president with more than 55 percent of the vote.

Brother Xi Jinping, general secretary of the Communist Party of China, the Chinese and Bolivians are both peoples with deep roots, thousands of years old. Those roots define our cultural identity and our outlook on life.

To finish, in my role as leader of MAS-IPSP, I express our will to construct spaces of cooperation and complementarity between our parties, joining forces to push forward a bright future for the people of both China and Bolivia.