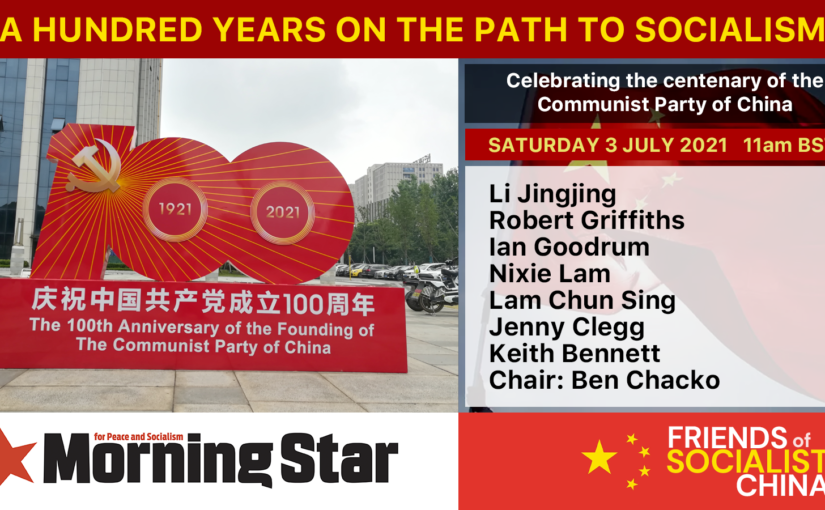 The following is the text of a speech given by British author, academic and campaigner Jenny Clegg at a recent webinar hosted by the Morning Star and Friends of Socialist China to celebrate the centenary of the CPC. Jenny discusses China’s unique contributions to Marxism, as well as outlining the history of the revolution and analysing the reasons for its continuing successes.

The story of how the CPC, founded in secret by just a handful of people, grew into an organisation of some 95 million members is truly remarkable.

It is a story that goes together with that of China’s transformation from the ‘Sick Man of Asia’ into the world’s second largest economy.  It is the Party that provided the political architecture that has made this possible.

Taking stock at 100 years means looking not only at China’s achievements but also what this has meant – and means – for the world.

The CPC’s story is one of twists and turns, of tenacity against adversity, retreating when retreat was necessary but also daring to seize the time when the opportunity arose.  What has given the CPC its strength, its courage to face reality, to learn from mistakes, was and is Marxism.  For the CPC, Marxism is not a dogma, but a set of tools applied concretely to solve China’s problems.

The key to the success of the Revolution in 1949 lay mainly in the Party’s ability to mobilise the people effectively both around national and around class goals.  For this it drew on Marxist class analysis to devise a revolutionary strategy of shared benefit so as to unite all who could be united in the common goals of ending foreign domination and building the nation.

Fundamental here was land reform which gained the CPC the support of hundreds of millions of peasants  – they participated in its mass organisations, they joined the Party itself, they carried out and conformed with its policies, and they gave material support in paying taxes and enlisting in its armies.

China’s contribution to the defeat of worldwide fascism in 1945 is often overlooked in the West.  It was Communist resistance together with the Nationalist armies that kept Japanese troops bogged down in China so that the Soviets could concentrate all their forces against the Nazis on the Western front.  This cost up to 20 million Chinese lives.  Nor is it widely understood that China the first country to end colonial rule as the Allies agreed to give up the Unequal Treaties in 1943.  China was to be one of the four founding members of the United Nations and the CPC was present at the occasion.

This example of how the Chinese people, led by a Communist Party, gained liberation in 1949 shone a bright light for colonised people around the world. Its experience of people’s war, revolution and the transformation of rural society was to be the inspiration for national liberation movements in many different countries in the years to come.

After 1949, the stabilisation of the country within a couple of years was really remarkable given the century of turmoil and war that had gone before. China could begin to focus on its development.

It was far less developed than the Soviet Union had been at the start, but the Party had the support of the peasants, the overwhelming majority of the people.  This made possible an agricultural strategy of cooperation before mechanisation and in 1956, striking while the iron was hot, Mao led China into the socialist era.

Through collective effort, the country greatly expanded its irrigation systems, undertook major infrastructure projects – the Nanjing bridge across the Yangzi joining North and South of the country –  and developed the foundations of heavy industry.  Rural industrialisation was vital in maintaining the support of the peasants, while the organisation of health and welfare in the commune system was designed to make sure no one was left behind.

Certainly here were terrible, tragic losses in the GLF and CR but economic growth in the Mao period overall at some 5 per cent per year was above average for the developing world.  The biggest mistake Mao made in my view was the failure to take population control seriously from the 1950s – life expectancy went up and the birth rate shot up placing a huge strain on the economy.

External circumstances were extremely hostile – the Korean and Vietnam wars fought on China’s borders – the eventual split from the Soviet Union leaving China vulnerable.  The Cold War all but obliterated China from Western consciousness. In my school years, China was never mentioned – it just didn’t exist.

Yet a great deal was achieved for the world as Zhou Enlai and Nehru agreed the 5 principles of peaceful coexistence, and China with Asian and African countries at the Bandung Conference laid the basis for South South cooperation, and indeed an entirely new type of international relations based on the equality of nations.

Reform and opening up

By 1979 China’s situation had changed dramatically.  It now had a certain level of overall industrialisation and the basics to feed and clothe the population.  Meanwhile, rapprochement with the US presented new opportunities.  This time it was Deng Xiaoping that dared to turn China around.

Reform and opening up has seen hundreds of millions of workers leave the countryside to work in the cities.  Rural population has fallen from 80 per cent to less than 40 per cent of the total.

Such a massive restructuring has meant the Party adopting a top down approach to build the cities, provide the services, schools, hospitals, and so on whilst freeing the private sector and inviting foreign investment to help create employment.

The ranks of the Chinese working class has swelled enormously.  Just as the private sector has grown, the state owned sector has grown also, the government careful to ensure the balance in favour of the latter.

Following years of double digit growth, more recently the emphasis has shifted to considerations of the environment, health, consumption and innovation.  The countryside has not been neglected with the provision of services – water, electricity, internet connections as well as a system of rural cooperative health insurance.

China became the workshop of the world and just how important it was to the global economy was evident in 2008 when it was China’s massive injection of funds for infrastructure that effectively prevented the world financial crisis from becoming a prolonged global depression.  China is now a more important trading partner than the US for the two thirds of the world.

As it has entered onto the world stage, China has put forward proposals to reform to the existing international institutions such as the IMF, WTO, and the UN.  These being resisted, it has gone ahead to form alternative institutions – the AIIB, the SCO, the BRICS bank – driving forward the multipolar trend.

There is still a long way to go – to continue to improve conditions for hundreds of millions of rural migrants who still live a hard life; to escape the ‘middle income trap’  where exports are no longer competitive either at the low or high end; to upgrade the technological base, reaching new frontiers – all now under an all-out onslaught from the US New Cold War.

Yet the Party has set ambitious targets for the next 15 years to double the average per capita income, to become a global leader in innovation and to turn carbon emissions towards decline.

Within 10 years the Chinese economy will overtake the US; in another 10 years it may be more than double.  What this will mean for the world is hard to imagine.  It is sobering to think that, from the founding commitment of the CPC to ease the Chinese people’s burdens, it has taken 100 years to eliminate extreme poverty.  Really that is how hard the going is.  But if it becomes easier for others to follow as multipolarity gains in strength and momentum not least through the BRI, this will surely be China’s greatest achievement.

By 2049 China aims to become a modern socialist country and a global leader,

Looking ahead to these goals, Xi Jinping has called to mind China’s revolutionary history and its Long March.

And he has also introduced a word of caution, noting recently that an important reason for the collapse of the Soviet Union was that the Communist Party was detached from the people and became a privileged bureaucratic group that only defended its own interests.

Over its 100 year history, the CPC has demonstrated extraordinary flexibility and creativity.  During the revolutionary period in particular, the Party honed its democratic practices, practices of the mass line, criticism and self criticism, opening the door of the party to evaluate performance, working from top down and bottom up, handling antagonistic contradictions by non antagonistic methods and sharing benefits.

It is by keeping to these practices that the Party will continue to lead the Chinese people to prosperity and the world finally, eventually, to peace.