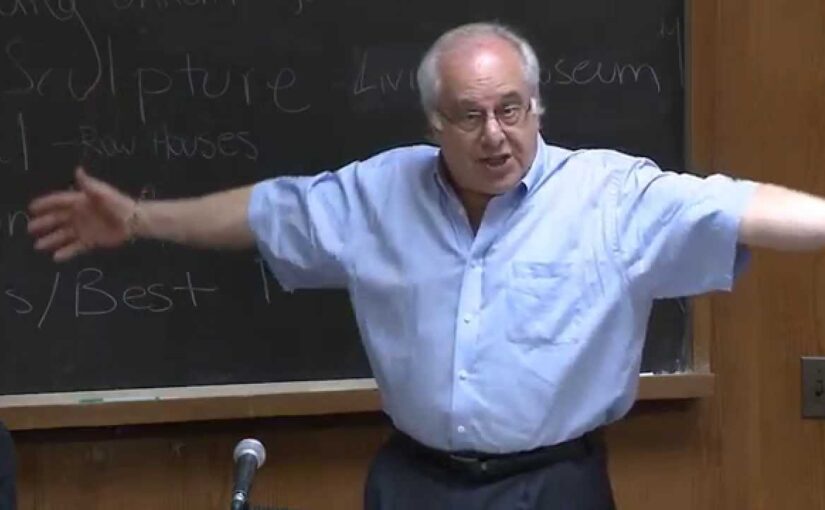 We are republishing this very interesting interview with Marxist economist Richard Wolff in Beijing Review, in which he discusses the reasons behind China’s economic success and the motivations for the US-led New Cold War.

The first book I ever read about China was The Good Earth by Pearl Buck, presenting the stories of poverty and suffering across the Chinese countryside in the early 20th century. What she described in the book actually didn’t take place too long ago, but when you look at what China has achieved over the past years and then compare it to what Buck wrote about, it makes for an incredible feat.

Since 1949, when the communist revolution succeeded, U.S. foreign aid did not go to China because the latter was a socialist country. U.S. foreign aid was, however, dispatched to every other Third World country across Asia, Africa and Latin America. Nevertheless, China has done better economically than every other country that did receive the assistance.

What does that tell us about getting aid from the West? It’s not the path to economic growth, it never was. The reality is that the path to economic growth was not to take aid from the West, but to rely on yourself. The Soviet Union once helped China, before the 1960s, but in general, the Chinese achieved it mostly by themselves. That’s a very powerful message all over the world.

Today, there is a sense of anxiety in the U.S. that the Chinese, over the last 30 years, have figured out a way to outcompete Western capitalism. Once upon a time, the hope had lingered that through reform and opening up, somehow China would move away from a powerful government and state-owned enterprises, and become like the West—an economic system in which large private corporations take on the dominant role. That’s what they hoped for and that’s what actually did not happen.

In China, major private corporations and government sectors exist side by side, but all governed by the CPC. The Party formulates plans with a set of goals that enable private and public resources to synergize. That’s what the West could never achieve.

For example, real wages, as in “what an average worker gets adjusted for the prices that have to be paid,” in the U.S. have been stagnant and have not changed much over the last four decades. Yet in China, they have gone up more than four times. Subsequently, the average living standards of the Chinese working class, too, are on the rise.

The above accomplishments have resulted in a sense of jealousy and anxiety in the U.S. that the Chinese may have unlocked the secret to the ultimate combination of private and public capital under the leadership of one powerful political party that can achieve socially attractive outcomes—which are not available in the U.S.

China has achieved extraordinary growth, growing up from one of the poorest countries in the world to a global superpower second only to the U.S. This is an achievement done in a historically short period of time. It seems to me that among all the underlying forces at work, much of the credit for that has to go to the CPC. They made the final decisions about this mixture of private and state-owned enterprises, about how to coordinate them, about how to guarantee they complement one another rather than destroy the other. I don’t see any logic in denying this remarkable deed, or in granting it anything other than admiration.

For example, during the past six months, the U.S. has been much slower in vaccinating its people against COVID-19 than China. There is an example of using private and public resources to concentrate on a priority problem in China—in this case, the virus. The world witnessed once again the ability of Chinese society, its Party, its government and its private sector to be coordinated and gain a more successful outcome.

Throughout its history, the CPC was able to learn from Marxism applied in other parts of the world. Many of the early CPC leaders had attended universities in Western Europe where they studied Marxism. They learned from the West, drew their lessons from it and then continuously kept adjusting the elements they had taken onboard. Their concerted efforts laid the groundwork for the next generations of the CPC to further elaborate on, eventually coming to full fruition in the 21st century.

There have been various movements in practicing socialism, yet the impact of the Chinese model will prove prominent in the future. The Soviet Union used to be the first successful example as they survived, surrounded by enemies. China is different. What China has achieved as an engine of economic growth is now being studied by every other socialist country trying to seek out the lessons that can be applied to their own national framework.

For the U.S., foreign policy is mostly shaped by domestic interests and concerns. In other words, the position taken toward China or Russia by the administrations of Donald Trump and Joe Biden, for example, is really put forward for domestic consumption. The U.S. is an inward-looking country, which is much more shaped by its struggles on the inside than by anything outside.

The U.S. is in a difficult position compared with China. It became a global capitalist power in the 20th century. During that time, the U.S. developed and overwhelmed countries such as Great Britain and Germany. [In 1989], the collapse of the Soviet Union left the U.S. without a competitor in the position of dominant global capitalist power. They wanted to believe, expected even, this would go on forever.

However, it did not. For the first time in a century, the U.S. has a global competitor economically—China. This is a whole new experience for the U.S. and it feels threatened. It has been trying for years to come up with some other solutions and so far, it hasn’t been able to come up with one. Over these last few decades, China has grown as an economy with a GDP growth of 6 to 9 percent every year. The U.S. stands at 2 percent.

The U.S. has not been able to change this dynamic. And what you’re hearing now is hostility toward China. But this is what psychologists refer to as a “sense of displacement.” The real dismay on the part of the U.S. stems from the fact that it no longer holds the position of the single dominant global power.

The business community continues to be interested in doing business with China. Under the surface, there is a desire sprouting from ideology. There is a feeling among capitalists worldwide that the Chinese market is the fastest growing major market in the world. The capitalist who is not active in China will lose out in the long run. Institutions like the U.S. Chamber of Commerce or the Business Roundtable, important business organizations, have spoken out against such sentiments of resentment and hostility toward China as they want to do business in and with China.

At the same time, enhanced people-to-people exchanges would help break down the array of negative stereotypes about China. And perhaps forge new, stronger ties.