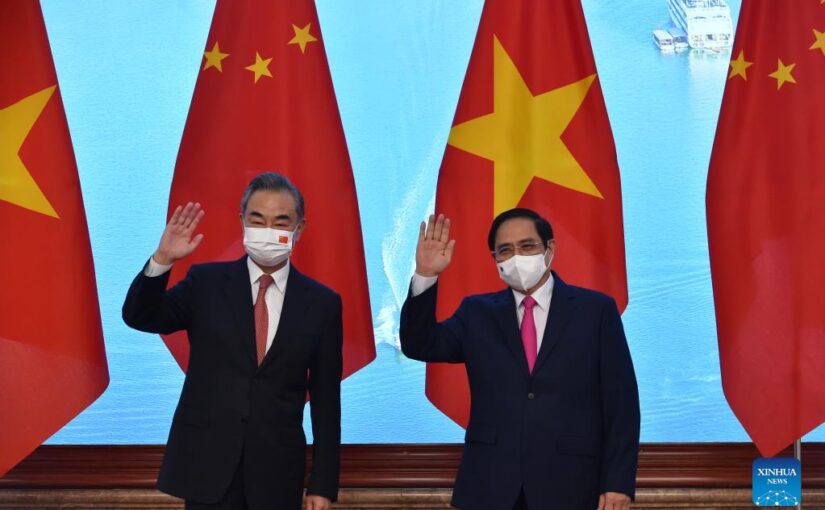 We are pleased to reproduce the following articles from CGTN and Nhân Dân, reporting on Chinese Foreign Minister Wang Yi’s recent visit to Vietnam. Both reflect a growing consensus between the two states to deepen cooperation, reject US interference and trouble-making, and settle historic differences in the spirit of peace and friendship.

CGTN: For Vietnam, China is a bulwark against Western interventionism

As a part of his tour of regional countries, Chinese Foreign Minister Wang Yi visited Vietnam and participated in the 13th meeting of the China-Vietnam Steering Committee for Bilateral Cooperation. Vietnam official media described the visit and the meeting as two countries maintaining positive trends and that Vietnam’s Deputy Prime Minister Pham Binh Minh sees win-win cooperation in a number of areas, including senior leadership visits, security issues, economic cooperation and COVD-19 management.

It’s time for a closer China-Vietnam relationship, one which is guided by a spirit of mutual interests and growing partnership. It is time for old disputes and differences to be resolved in a productive and pragmatic way, and to ensure that no third countries can drive a wedge between them or stir up contention or distrust. It is a bilateral relationship not just of a historic proportion, but one which embeds enormous potential and promise. As two revolutionary communist states sharing a common ideology, worldview and vision, it is time to find a new way forwards.

Vietnam is on a similar developmental pathway as China. What the two countries hold in common far exceeds what sets them apart. Having successfully pursued a revolution, overthrown the shackles of colonialism and achieved national reunification, Hanoi has since orientated its priorities, like Beijing did, towards achieving national prosperity and development through establishing a socialist market economy, reform and opening up, achieving rapid GDP growth year upon year. There is little doubt that Vietnam will be an economy of the future, and the China-Vietnam relationship will ultimately be a critical bedrock of that potential.

As a result, it is more critical than ever that both countries learn to expand, structure harmonize their bilateral relationship, creating channels of co-existence, interactions and understanding which alleviates strategic mistrust or fear. China and Vietnam should conceive their relationship as neighbors and partners, not potential enemies, rivals or adversaries.

The existence of the People’s Republic of China safeguards the Socialist Republic of Vietnam and its political system, acting as a bulwark against Western anti-communism and interference in its internal affairs. Without China, the United States could seek, as it tried to in the 1960s, to try and topple and alienate Vietnam’s government. In some ways, the success of Vietnam is meted on its partnership with China.

Of course, there are some differences between Hanoi and Beijing, not least related to territorial, border and maritime disputes. It is time for these two countries to expand dialogue, negotiations and prudence in these matters. Even if they cannot be instantly resolved, it is time to establish mechanisms to ensure these no longer create tensions. This should include both sides avoiding unilateral or provocative actions, expanding dialogue and communication channels, upholding peace and preventing third parties from romping up trouble for geopolitical ends and seeking a common goal of stability.

It is easy enough for certain countries to try and take a stake in these matters. Some are profiting from creating tensions and distrust for their own geopolitical ends, aiming to divide, militarize and exploit Asia and the Asia-Pacific region. It is up to the Chinese and Vietnamese people to step up and find a bilateral resolution in the interests of both parties. China is willing to talk and to place its faith in Hanoi as a neighbor that a way forwards can be met.

Ultimately, it is time to establish a shared vision, a shared prosperity and a shared partnership between China and Vietnam. The two neighbors share a common ideology, a common destiny and a common future. Beijing is ready to worth together with Hanoi across many fields and unleash its potential, rekindling a historical revolutionary solidarity between the two in building wealthy, advanced, harmonious and just states in the name of both countries’ people.

Vietnam attaches importance to developing ties with China and considers this as a leading priority in its foreign policy, Prime Minister Pham Minh Chinh told Chinese State Councillor and Minister of Foreign Affairs Wang Yi at their meeting in Hanoi on September 11.

The host leader affirmed that the traditional friendship between Vietnam and China is a precious asset of the countries’ Parties, States, and peoples, and that the reinforcement of bilateral relations is an important factor for each country’s development and also a contribution to regional and global peace, cooperation, and development.

He expressed his belief that both sides will work together to effectively implement the common perceptions and agreements reached at the 13th meeting of the Vietnam – China Steering Committee for Bilateral Cooperation, maintain frequent contact between their senior leaders, and further promote exchange and cooperation mechanisms to enhance mutual understanding and trust, thus fostering relations between the two Parties and States in an increasingly substantive and effective manner.

With regard to cooperation in the COVID-19 fight, PM Chinh lauded the countries’ close coordination and mutual support since the pandemic broke out and thanked China for assisting Vietnam with vaccine via different forms, especially the provision of another 3 million vaccine doses announced during this trip by Wang.

He expressed his hope that China will continue supplying vaccine for Vietnam; transfer production technology for COVID-19 vaccine and treatment drugs; carry out COVID-19 vaccine purchase contracts to meet Vietnam’s demand, particularly in this September and October; share experience in disease treatment; and coordinate in controlling the pandemic in border areas.

He also encouraged Chinese enterprises to invest in projects that match the two countries’ relations so that the people can enjoy the benefits from the substantive achievements of the bilateral friendship.

In terms of the East Sea/South China Sea issue, in a straightforward and constructive spirit, the PM stressed that both sides should instruct their law enforcement forces at sea to adhere to the high-level common perceptions and the Vietnam – China agreement on basic principles guiding the settlement of sea-related issues, strive to properly settle and control disputes well, maintain a peaceful and stable environment at sea; while working with ASEAN countries to seriously implement the Declaration on the Conduct of Parties in the East Sea, step up the negotiation on a substantive and effective Code of Conduct in the waters, comply with international law, especially the 1982 United Nations Convention on the Law of the Sea (UNCLOS), and ensure security, safety, and freedom of navigation and overflight.

For his part, State Councillor and Foreign Minister Wang affirmed that the Chinese Party, State, and people attach great importance to the friendly neighbourliness and comprehensive cooperation with their Vietnamese counterparts.

He thanked Vietnam for supporting and assisting China since COVID-19 first broke out, stressing that China is ready to continue helping Vietnam in the current period as it considers the difficulties facing Vietnam as its own.

He expressed support for PM Chinh’s opinions about the orientations and measures for reinforcing the two Parties and countries’ relations.

China will effectively carry out the outcomes of the 13th meeting of the Steering Committee for Bilateral Cooperation, further intensify win-win cooperation in all fields, and seriously carry out the high-level common perceptions about the control and proper settlement of disagreements, thereby unceasingly developing the China – Vietnam comprehensive strategic cooperative partnership in a healthy and stable manner to bring practical benefits to both peoples, the Chinese official affirmed.