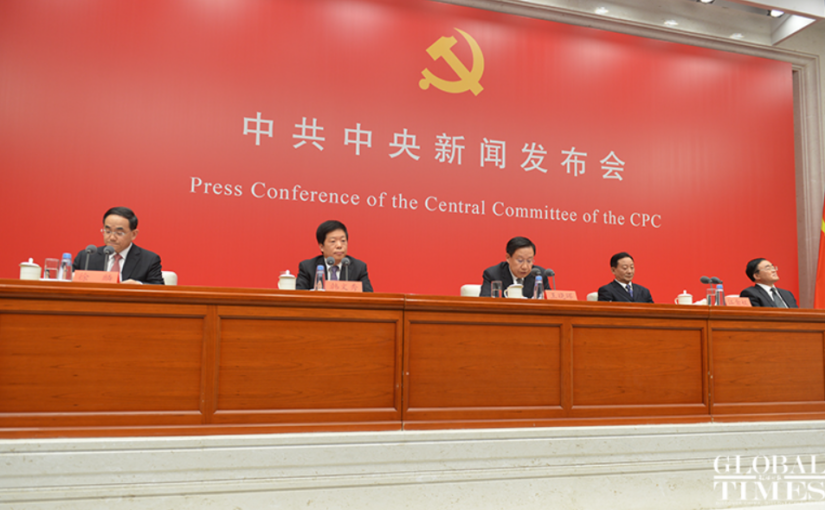 This article in the Global Times quotes Jiang Jinquan, director of the Policy Research Office of the Communist Party of China (CPC) Central Committee, discussing the question of democracy at a press conference on the sixth plenary session of the 19th Central Committee of the CPC. He observed the weaknesses and limitations of Western capitalist democracy and noted the hypocrisy of attempting to impose this model on other countries via colour revolutions. Jiang Jinquan affirmed that China will continue to develop its own whole-process people’s democracy rather than attempting to copy the Western model.

The US’ democracy summit convened next month with the attempt to “revive” Western democracy amid mounting democratic problems in their countries is a huge irony, as its purpose is simply to suppress other countries and divide the world into different camps, a senior Chinese official said on Friday.

Some Western countries have shown a hollowing out of democracy,triggering dissatisfaction among their fellow people, but they are still trying to impose their democratic model on other countries. Color revolutions in recent years have resulted in disasters to local people, which the people of the world have become increasingly aware of, Jiang said in response to a question on comparison between China’s whole-process people’s democracy and Western democracy.

Jiang listed several polls as an example. According to a new survey from the Pew Research Centre, 57 percent of global respondents and 72 percent of Americans said that US democracy used to be a good example but has not been recently.

According to an NPR poll, 81 percent of US adults say the future of US democracy is under threat.

In contrast, two recent polls released by a US polling agency show that Chinese people’s satisfaction with the CPC and the Chinese government is 95 percent and 98 percent, respectively.

Democracy is not for decoration, but for solving people’s problems. Whether a country is democratic or not depends on whether its people are the masters of the country, whether its people have the right to vote and more importantly, whether they have the right to participate widely. It depends on what promises are made during the election process, but more importantly, it depends on how many of these promises are fulfilled after an election, Jiang said.

Jiang said the CPC has realized that China’s political civilization and political system must be deeply rooted in the mind of Chinese society. Copying other countries’ political systems will not work and may even destroy the country’s future.

Since the 18th CPC National Congress, the CPC Central Committee with Comrade Xi Jinping at its core has adhered to the path of political development under socialism with Chinese characteristics and upheld the leadership of the Party and the position of the people as masters of the country, has resolutely resisted the erosion and influence of the Western political trend of so-called “constitutionalism”, ruling party rotation, and developed a democratic road of whole-process people’s democracy, Jiang said.