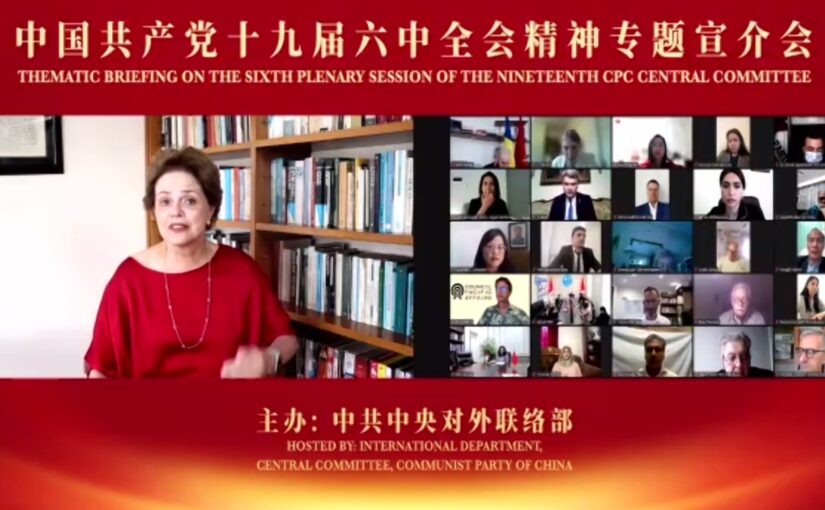 On 19 November 2021, the International Department of the Communist Party of China (CPC) held a briefing in Beijing about the recently-concluded 6th Plenary Session of the 19th CPC Central Committee. Friends of Socialist China’s co-editors were among the several hundred international guests attending via video link.

The speakers from the CPC gave an overview of the Plenary Session and the Resolution of the CPC Central Committee on the Major Achievements and Historical Experience of the Party over the Past Century it adopted. The key message of the Plenary and Resolution is a reaffirmation and further definition of China’s evolving socialist path in the present era, central elements of which include: a strong emphasis on sustainable development and the construction of an ecological prosperity; tackling relative poverty and building common prosperity; continuing to develop whole-process people’s democracy; continuing the party’s self-reform and the fight against corruption; expanding the Belt and Road Initiative, upholding multipolarity and working towards a human community with a shared future; and moving confidently towards the CPC’s Second Centenary Goal: “to build China into a great modern socialist country that is prosperous, strong, democratic, culturally advanced, harmonious, and beautiful.”

One of the key Chinese speakers was Song Tao, head of the International Department of the CPC, who made an insightful contribution about the trajectory of modern Chinese socialism and Xi Jinping Thought on Socialism with Chinese Characteristics for a New Era. He reflected on China’s progress since the victory of the New Democratic revolution in 1949, observing that China had achieved in a few decades things that had taken centuries in other countries. He further commented that China’s successful suppression of the Covid-19 pandemic demonstrated the government’s fundamental orientation towards the needs of the people.

There were also contributions from Russia, Brazil, Pakistan, Nigeria, Yemen, Cambodia, Spain and several other countries. One highlight was a speech by former Brazilian president Dilma Rousseff, who noted that China’s achievements – defeating colonialism, dismantling feudalism, getting rid of absolute poverty, becoming a world leader in science and technology – have earned it the respect and admiration of the people of Latin America. Commenting on the differences between China’s economic model and that pursued by the capitalist powers, she said: “Other countries are engaged in blind pursuit of wealth. They create wealth but still there is poverty and misery. The goal of China is to create wealth and use it to meet people’s aspirations for a better life.” Rousseff further opined that the fundamental reason for China’s extraordinary successes since the founding of New China is the leadership of the CPC.

Embedded below is the video of a short report by CGTN journalist Li Jingjing, including an interview segment with Carlos Martinez.