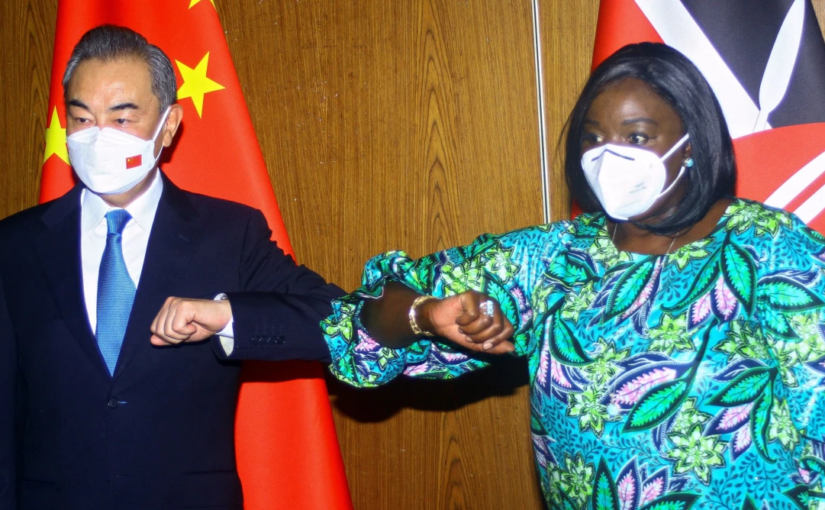 This article by Stephen Ndegwa, first published in CGTN, discusses the ‘debt trap’ narrative in the context of Foreign Minister Wang Yi’s recent trip to several countries in Africa and Asia. Ndegwa notes that, although Western media and politicians often decry Chinese infrastructure loans as being exploitative, these accusations don’t stand up to scrutiny. Indeed, the debtor countries don’t share these criticisms and are highly appreciative of China’s support for their sovereign development.

One of the most popular rules of power says if you tell a lie big enough and keep repeating it, people will eventually come to believe it. Well, that could be so. But those who religiously apply this maxim, which purportedly emanated from Nazi Germany’s Joseph Goebbels, forget that it carries a rider. The lie can only be maintained for as long as the originator shields people from the truth.

This has been the case with the so-called debt trap, a phrase generally coined by Western countries that alleges that China ensnared developing countries with unserviceable debt to take over their national assets. China’s aim, so goes the lie, is to enable China to get a foothold in various strategic locations around the world.

Interestingly, even after the United States-led Western bloc’s warning that choices have consequences, China’s partners do not seem to be relenting in expanding and deepening their Sino cooperation. The stress-free partnership has given developing countries much-needed breathing space that has helped them make economic choices best suited to their needs, rather than experimenting with high-blown models that have no practicality.

Chinese State Councilor and Foreign Minister Wang Yi was warmly received by the host countries on his first foreign visits in 2022, and the respective partners celebrated the fruits of their cooperation so far and committed themselves even further into the long term.

Kenya in Africa and Sri Lanka in Asia will suffice here to show how the debt trap is a ridiculous theory. China’s development model with developing countries is based on simple economics. For instance, one of Kenya’s recent flagship projects nearing completion, the Nairobi Expressway, is a perfect model of a successful Public-Private-Partnership (PPP).

It is a joint partnership between the public Kenya National Highways Authority and the China Road and Bridge Corp. (CRBC) and involves the construction of a 27-kilometer roadway overpass to bypass the capital city’s perennial gridlock that has been the bane of many businesses in the country. The beauty of it is that the CRBC has shouldered virtually all the design, financing and construction costs of the expressway, which will be repaid with the road’s user fees in the coming years.

On June 25, 2018, “The New York Times” published an article that claimed Sri Lanka’s government had surrendered the Hambantota International Port to China after the former was unable to service its loans. The article twisted well-known and accepted economic practices like concessions and leasing to a de facto take over. Now, why would China throw good money after bad if the feasibility studies had shown that there was no possibility of recouping its investments?

What do the debt trap theorists have to say after Wang and Sri Lankan President Gotabaya Rajapaksa on January 9 pledged to strengthen cooperation with China in the fields of economy, trade, finance, tourism and infrastructure? Does such camaraderie denote bad blood between the two partners after the so-called ceding of Sri Lanka’s port to China?

These arrangements are actually a boon to China’s development partners due to the technology transfer and impeccable management skills passed on during the duration of co-ownership of projects. Furthermore, after the contract is over, the host countries are bound to enjoy revenues from these projects in perpetuity.

The debt trap theory is also an attack on the Belt and Road Initiative (BRI), the Chinese global infrastructural project that has met with unprecedented success within a relatively short time for its magnitude. The West, the debt trap propagandist, has now realized that the BRI has stopped its hegemonic game in its tracks.

The overarching impact of the BRI’s links to trade, investment, debt, procurement, environment, poverty reduction and infrastructure has made the West increasingly irrelevant as a development partner. It is not really the role of development partners to dictate what kind of projects are viable for developing countries. Only the wearer knows where the shoe pinches.

Experts are of the view that, most likely, the U.S. has been crying louder than the aggrieved to hide the fact that it would actually be the one trapped in Chinese debt if such a trap were to exist. China is now the world’s leading global creditor, most of which is owed by the U.S.

Analysts see this scenario as the main factor behind U.S. growing insecurity with China’s growth. Ironically, it is China that should be getting jittery about the superpower’s increasing economic woes, as it will increase the repayment period of its burgeoning debt.