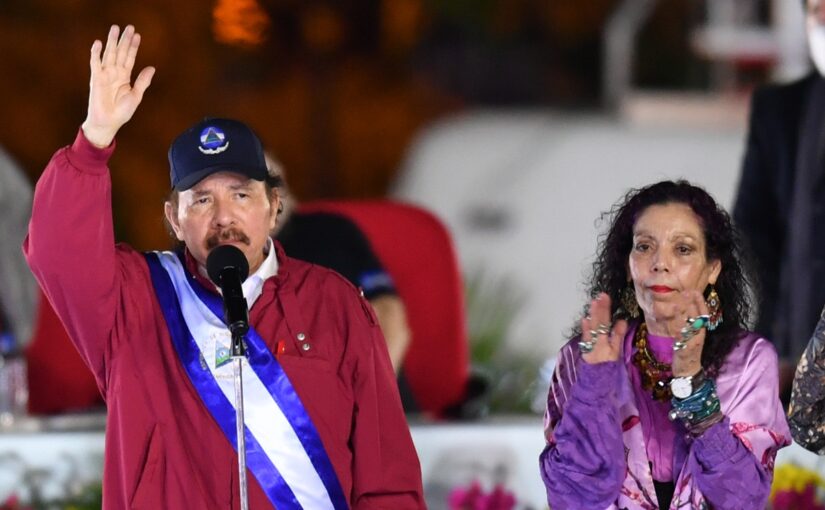 This excellent article from Global Times locates this week’s inauguration of Daniel Ortega for a further term as President of Nicaragua, and the increasingly close ties between China and the Central American nation, within the overall context of a resurgence of the left throughout Latin America. This is occurring in the teeth of intense US pressure and hostility and, the article notes, the Latin American left is characterised by a strong opposition to hegemony. The growth of the left in Latin America  therefore  aligns with global trends and will lead to stronger ties with China as well as Russia.

Swearing in at inauguration ceremony for his new term attended by envoys from China and Russia and reaffirming cooperation with China, Nicaragua President Daniel Ortega is aligning with current global trends as more Latin American nations elect left-leaning governments that will act in their own best interests, despite continuing US attempts to reinforce its influence by using measures mixing sanctions and aid in what it considers its “backyard.”

On December 10, Nicaragua announced the resumption of diplomatic relations with the People’s Republic of China (PRC), 3.5 hours after the Central American country announced it was severing “diplomatic ties” with Taiwan island.

Nicaragua has made the right choice in keeping with current trends. It chose China out of the need for development, and future cooperation between the two countries will be broader, Yang Jianmin, an expert on Latin American studies at the Chinese Academy of Social Sciences, told the Global Times.

Yang also noted that before the resumption of diplomatic relations, Nicaragua  expressed support to China on topics related to Xizang and Hong Kong regions.

During the meeting with Cao on Monday, Ortega thanked the Chinese president for sending a special envoy to attend the inauguration and said that Nicaragua will adhere to the one-China principle, totally supports and is willing to join the Belt and Road Initiative (BRI) and the Global Development Initiative to build a better future for the China-Nicaragua bilateral relations, Xinhua reported.

Nicaragua media and Russia media reported that China and Nicaragua signed cooperation agreements, including a memorandum of understanding on cooperation under the framework of the BRI and the 21st Century Maritime Cooperation, and an agreement for the mutual exemption of visas for holders of diplomatic passports, service passports, and public or official affairs passports.

Latin America, with many underdeveloped countries, relies on exports of primary products.

Dominated by the US, these countries have been forced to stay in the lowest end of the industrial chain, Pan Deng, executive director of the Latin American and Caribbean Region Law Center of China University of Political Science and Law, told the Global Times.

Their urgent needs are ridding themselves of their current position in the industrial chain designated by the US hegemony, breaking bottlenecks and improving infrastructure construction, and seeking potential cooperation in fields like carbon credits, Pan said. These advantages have encouraged these countries to board the fast train of China’s economic development, Pan noted.

However, out of geopolitical concerns, the US not only prevented countries in the region from establishing diplomatic relations with the PRC, spared no efforts to thwart countries from making the right choices, and set limitations to restrict Chinese companies from doing businesses in the area, Pan said.

For example, US officials have been reportedly pressing Latin American countries to replicate Washington’s decision to exclude Huawei from its 5G networks, hyping concerns over China’s alleged “snooping activities.”

Pan noted that in order to help the island of Taiwan reinforce “diplomatic ties,” the US pushed the Taiwan Allies International Protection and Enhancement Initiative in March 2020 to threaten countries that attempt to sever ties with the island.

“Such moves that put its own interests above international rules and come at the cost of other countries’ development, are typical hegemony and power politics,” Pan said.

With the stable political situation in Nicaragua, cooperation projects especially under the BRI, likely on infrastructure and telecommunication, will soon bring benefits to local residents, analysts said, noting the cooperation stands in sharp contrast with the US and EU’s latest sanctions on Nicaragua.

On Monday, just before Ortega’s inauguration, the US imposed a new round of sanctions on Nicaragua officials, including the defense minister over accusation of “state acts of violence.” Meanwhile, the EU announced fresh sanctions on individuals in Nicaragua for “undermining democracy” and “human rights abuse,” US media reported.

“The US has fully unfolded its hegemony in Latin America and is doing whatever it wants. Not only Nicaragua, other regional countries, including Cuba and Venezuela have been under US sanctions for decades,” Jiang Shixue, director of the Center for Latin American Studies at Shanghai University, told the Global Times.

Afraid of China’s increasing influence in the region, the US also blocked cooperation between China and regional countries. But China’s investment and economic activities could not only promote regional economic development but also benefit the US given the large number illegal immigrants swarming into the US driven by disturbances in the region, Jiang noted.

Analysts noted that establishing diplomatic relations with China aligns with the global trend and the interests of countries in Latin America and is also what each leader considers during their days in office.

Nicaragua is the eighth country that the island of Taiwan has lost “diplomatic relations” with after the Democratic Progressive Party (DPP)’s Tsai Ing-wen became Taiwan regional leader in 2016.  In September 2019, the Solomon Islands severed ties with Taiwan, and less than a week later, Kiribati also broke ties with it.

The island of Taiwan now has 14 “diplomatic allies” left with eight located in Latin America and the Caribbean. However, experts noted that as diplomatic ties resumed between China and Nicaragua as well as the bilateral cooperation have demonstrated their positive effects, more countries would join Nicaragua to make the right choice.

Moreover, with the left-leaning political shift across Latin America, countries may adjust their diplomatic relations with the US, develop closer relations with China and Russia.

Recently, many Latin American countries have seen a strong push toward the left, including the election victory of Henrique Borici in Chile. Honduras has just elected Xiomara Castro as president, a left-wing woman who shows the intention to establish diplomatic relations with the Chinese mainland, and Peru also elected Pedro Castillo as president, who was a teacher in a rural school and trade-union activist.

Pan told the Global Times leftists in Latin America have recently taken power in many countries, and a trend of “left-leaning” governments has become increasingly obvious. The left wing in Latin America is heavily influenced by its opposition to hegemony, especially the US’ interference in its internal affairs.

Although the “carrot and stick” policy of the US is still working, the ruling environment of the left will help the authorities, social elites and the general public in many Latin American countries to recognize the hegemonic behavior of the US, forming more social consensus, and make a choice in accordance with the historical trend when the time comes, Pan said.

Yang said that the US government has noticed this trend and has started to take a measures. “It can be said that even today, the US still sees Latin America as its ‘backyard’ and is determined to ensure its absolute influence in the region, and is willing to resort to sanctions, threats and even military invasion to do so.”

However, Yang noted that the Biden administration is wooing people with high-profile promises of aid to build infrastructure and solve problems like immigration. It also imposes pressure on Latin American countries that hope to establish closer relations with China, adding obstacles to the development of China-Latin America relations.

3 thoughts on “Nicaragua along the Belt and Road”