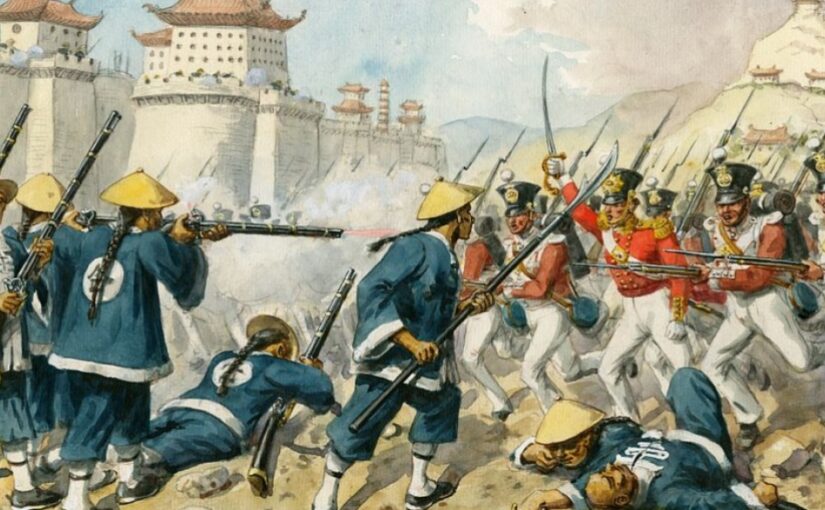 We are pleased to republish this article by Nick Matthews highlighting Karl Marx’s writings on China, originally published in the Morning Star.

Although not as well-known as his writings on Ireland and India, Marx paid a great deal of attention to China and not least to its relations with Western powers, Britain in particular. Much of his writing on the subject originally appeared in the form of articles for the New York Daily Tribune. As a passionate opponent of colonialism, Marx was outraged at Britain’s predatory Opium Wars against China and he supported the Chinese people’s resistance to foreign aggression without any equivocation.

Matthews’ article also contains useful background information on the New York Daily Tribune as well as on the work of Donna Torr, a foundation member of the Communist Party of Great Britain, whose work in Moscow included translating the works of Marx and Engels and who edited the definitive collection of Marx’s journalistic work on China, first published in 1951.

China and Marxism have been much discussed lately. Hearing these voices reminded me that Karl Marx himself had written extensively about China. How his views have come down to us is quite a tale.

In the late 1840s, Charles Anderson Dana, like many well-to-do Americans, took a trip to Europe.

In Paris he came across an uncompromising German radical who seemed to understand everything that was going on in those revolutionary times. This was of course Karl Marx.

Dana was the managing editor of the New York Daily Tribune and he immediately thought Marx would make an excellent contributor to his newspaper.

This was not initially possible, as in the fervour of those revolutionary times, Marx headed to Cologne to edit the Neue Rheinische Zeitung.

Following the failure of the revolution there in 1848, in which Engels took a more active part, the Prussian authorities arrested the paper’s staff and deported Marx.

After a short sojourn in Paris in 1850, a destitute Marx arrived in London where he began to write for the New York Daily Tribune.

This was a remarkable newspaper, serious and radical, edited by Horace Greeley, a socialist and a follower of Charles Fourier — and from the 1830s and an important opponent of slavery.

Marx took his contributions very seriously and if he had never written anything else, he would be remembered as an outstanding journalist.

Marx’s contributions to the Daily Tribune, some written by Engels, amount to several thousand pages. Between 1851 and 1862 he wrote about revolution and counter-revolution in Europe, British politics, the Crimean war, India and imperialism, the US and slavery, while maintaining a running commentary on economics, finance and trade.

One issue he returned to time and again was China. As Francis Wheen, in the introduction to the Penguin Selected Journalism of Karl Marx, tells us: “With the possible exception of human slavery, no topic raised Marx’s ire as profoundly as the opium trade with China.

“It is difficult today to grasp the full degree to which opium dominated Chinese society in the 19th century.

“The cost in human lives was enormous, not only because of the of thousands of Chinese who were addicted to a drug that made normal life impossible, but because by the time the century began, the British colonial and mercantile classes were willing to spill substantial amounts of blood in order to keep the narcotics flowing from India to China.”

The splendours of the Orient had long fascinated the West — Chinese textiles, porcelain and tea were all highly prized.

Adam Smith described China as “one of the richest, best cultivated, most industrious, nations on earth.”

The problem for Western merchants was that while China produced things the West wanted, the West did not produce anything the Chinese wanted.

The British East India Company found a solution to this problem. It cultivated a crop, on its newly conquered lands in India, that created its own demand. By 1810 it was shipping 325 tonnes of opium a year into Canton.

When the Chinese tried to stop this trade in 1839, Britain went to war to protect it.

Marx wrote a substantial amount about “the China trade,” developing ideas about free trade and what we now call dependency theory and underdevelopment.

Thanks to a remarkable Marxist historian, all these writings are available to us: Dona Torr, who was a major influence in the British Marxist Historians Group.

She had been a librarian at the Daily Herald and in 1920, a founding member of the Communist Party of Great Britain.

A courier during the 1926 General Strike, she travelled to Moscow and worked as a translator for the fifth congress of the Communist International.

As a fluent German speaker, she worked in the Marx-Engels Institute, translating into English the Soviet-German edition of the complete correspondence of Marx and Engels.

This made her name as a Marxist scholar back home, where her husband Walter Holmes was a journalist for the Daily Herald and later, the Sunday and Daily Worker. He had postings in Russia and China.

It is thought Torr went with him to China, to Manchuria when he covered the Japanese attacks recounted in his 1932 book Eyewitness in Manchuria.

She went on to edit the definitive collection of Marx’s writings from the New York Tribune about China, published by Lawrence and Wishart in 1951. It has run into 14 editions.

When I first read these articles, I was staggered at the clarity of the writing, his understanding of the forces at play and the sharpness of his conclusions considering the access to information he would have had. I know he spent a lot of time reading in the British Museum Library, but even so.

To ensure his readers fully understood what had been happening in China, he wrote a two-part history of the opium trade in 1858.

As an outline of the events of the period, it “is as thorough and as damning an indictment of imperialism as anything else he wrote,” Wheen tells us.

More importantly for me, the Marx we know shines through. He saw that the opium trade was a barrier to the economic development of China.

It corrupted the processes of customs and starved the country of silver, the currency used to pay for the opium. In turn, the Chinese had to minimise non-opium imports and maximise exports to the West.

This trade imbalance distorted Western markets and in 1859, in an article entitled Trade with China, Marx explains, accompanied by detailed trade statistics, that the structure of Chinese society and economy, its land tenure, taxation and husbandry was self-sustaining.

Unlike in India where Britain had the power to undermine these structures by converting “the Hindu self-sustaining communities into mere farms, producing opium, cotton, indigo, hemp and other raw materials, in exchange, for British stuff. In China the English have not yet wielded this power, nor are they likely to do so.”

For me the most prescient of his articles is the one of 1857 entitled Whose Atrocities? which concludes: “Meanwhile in China, the smothered fires of hatred kindled against the English during the opium war have burst into a flame of animosity which no tenders of peace and friendship will be likely to quench.

“For the sake of Christian and commercial intercourse with China, it is in the highest degree desirable that we should keep out of this quarrel and that the Chinese should not be led to regard all the nations of the Western world as united in a conspiracy against them.”

One thought on “Damning imperialism: Marx’s writing on China”