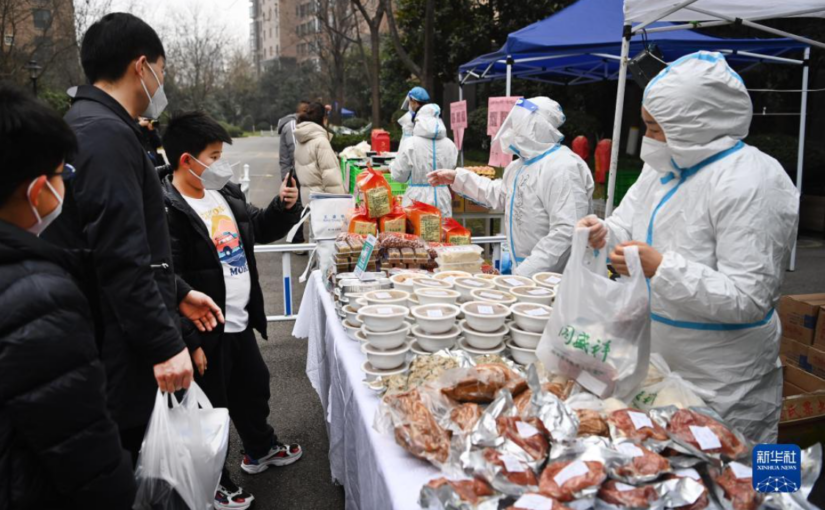 We’re pleased to republish this interview of Shi Huli, a community education worker in Xi’an. At the time the interview took place, Shi had been locked down with his family for just over two weeks (the Xi’an lockdown has since been lifted after several days in a row with no transmission). Shi’s description contrasts sharply with the tales of “authoritarianism” published in the Western media: thousands of community workers worked night and day to ensure that every family had sufficient food and supplies, and that people’s medical needs were met. Meanwhile, multiple rounds of mass testing were carried out. The overall result is that a small outbreak in Xi’an – a major city of 13 million people – was prevented from getting out of control.

The interview was carried out by Eben Dombay Williams and originally appeared in Challenge.

Following a recent outbreak of 127 cases of COVID-19, Xi’an, the ancient capital of China and home to the Terracotta Warriors, has become the latest lockdown as a part of China’s “zero COVID” strategy. Despite being the most populous country on Earth and the first to face the disease, China has been one of the greatest success stories in the fight against COVID, achieving not only one of the lowest death rates in the world, but sustaining sharp economic growth while many Western countries have stagnated.

The global fight against the pandemic has now turned into a tale of two systems. Socialist China, which has a planned economy and is able to combine state intervention with grassroots mobilisation to prioritise human need, has only had 4,639 deaths from the disease since the pandemic began, and only two deaths on the mainland throughout the whole of 2021 (Hong Kong and Taiwan have different systems of government and had 64 deaths and 843 deaths respectively). Meanwhile, as two major centres of global capitalism and neoliberalism, the US and the UK have so far had 859,046 and 150,056 deaths apiece from the pandemic, mostly among the poor and working class. Between them, these two countries now have over half the active COVID cases in the world.

Despite these vastly different outcomes, the Western press has argued that China has been naïve in approaching a zero COVID response while other, more sensible countries have “learned to live” with the disease. To prevent us from drawing lessons from China’s strategy, outlets like the Economist have encouraged racist stereotypes that Chinese people are suspicious and secretive, and must therefore be engaged in a nationwide conspiracy to cover up their real figures. Still others have spread fear about China’s lockdowns as being overly authoritarian.

So is this the reality on the ground, and how do ordinary Chinese people view the government’s response? To find out, I spoke to Shi Huli, a community education worker who’s been in lockdown with his family in Xi’an for just over two weeks.

So, can you give us an overview of the situation in Xi’an?

I live on the outskirts of the city, and since the latest outbreak, Xi’an has adopted the strictest lockdown measures yet. Every major intersection now has a quarantine checkpoint to stop pedestrians walking past, and they’re only allowing through essential supplies and work vehicles. To make sure that everyone has what they need to get by, tens of thousands of Party officials across the city have been going into communities to meet the needs of the people, and they’ve received fresh fruit and vegetables every day.

So far, all 13 million people in Xi’an and 2 million people in Xianyang have already received 6 rounds of testing from their homes, with the last few all performed by medical staff outside individual apartment blocks to avoid too many people gathering together at once. Testing is compulsory and no one is left out.

A few days ago, Zhong Nanshan (a leading medical professional who has guided China’s COVID response) and the Vice Premier of the State Council temporarily led the disease control and prevention work themselves, and we’ve just reached the turning point. That means that the lockdowns will soon be lifted for each district depending on its individual situation, and our lives and the economy will soon go back to normal.

Oh, and it’s worth mentioning that big data in China is phenomenal. It’s had a very significant impact on controlling and preventing the spread of the disease.

Who watches the quarantine checkpoints, and are they managed 24 hours a day?

Yes, volunteers and security guards watch them 24 hours a day, in three shifts.

Are you allowed to walk around your neighbourhood or do you have to stay at home?

It depends. Code Yellow means that you have to remain quarantined in your home. They’ll put some tape on your door, and the government will bring you free vegetables. They’ll give you tests from home as well.

Other than that, people are free to go out into their local neighbourhood for a bit of exercise.

What does “Code Yellow” mean? Are there other code levels as well?

There are three code levels. Code Green means healthy; Code Yellow either means that the household hasn’t received continuous testing, or they’re near someone with COVID; and Code Red means they’ve either been diagnosed with COVID themselves, or they’ve been in direct contact with someone else who’s been diagnosed.

You said that Xi’an has adopted the strictest measures. Do you think they’re too strict? Aren’t people annoyed by them?

The lockdown is very strict, but no one thinks it’s unnecessary. Everyone’s happy to do their part and follow the prevention strategy.

It’s great that people are so onboard, but let’s say they weren’t and they wanted to break quarantine. What would happen if they broke the rules and left their homes?

(Laughs) Pretty much everyone is happy to follow the rules. I haven’t really heard of anyone breaking them, although there were a few Chinese people on TikTok from overseas who did. In minor cases, they’ll just get a lecture and a slap on the wrist, but in more serious cases they’ll be temporarily restricted from leaving the country.

I guess there are always going to be a few people like that! How many people do you live with, by the way?

There are three of us at home at the moment. So far, we haven’t left our neighbourhood in 15 days.

You must be bored staying at home all day. How do you spend your time?

It is a bit boring, but we’re happy to do it if it means getting through the outbreak. At home we watch TV, sleep, read books, cook, eat, and head downstairs to exercise. Oh, and every 48 hours we get to do our tests! (Laughs)

What work do you do? Are you working from home or are you on leave? And do you still get paid?

I work in community education. I guess you could say I’m on leave, though not really because of the type of work I do.

Other government units, like my old co-workers and friends, haven’t been home for more than ten days since the outbreak. Some are at the disease control centre, some are at the quarantine checkpoints, some are out in the community and on the streets helping the medical professionals, and others are volunteering. I’m staying at home so as not to cause any trouble! (Laughs) But no, my salary isn’t affected.

It sounds like your old colleagues are working really hard! People must really trust the government.

(Laughs) Yes, everyone has a lot of faith in the government. My old comrades are working so, so hard right now.

I also wanted to ask you how people find out the latest information and guidelines. Are they sent straight to people’s phones, or do you need to watch TV?

Like I said before, big data is really incredible in China, and social media is really advanced as well. There are a huge number of channels available for obtaining information: news on TV, WeChat groups, friend groups, etc. Things can be shared across the Internet less than ten minutes after they happen.

You also said that the government’s been sending you fruit and vegetables. Are they free? How do you get other food, medicine, etc.?

Yes, the ones sent to residents in quarantine are free, but neighbourhoods also have a place where we can buy food, as well as daily essentials and anything else we need. For medicine and other specific things, there’s a shop phone at the entrance to the community, and they deliver straight to your door. Cigarettes, beer, drinks, beef, roast chicken… Just make the call and it’ll usually be delivered in just over 10 minutes.

I can see how the government has helped you, but are ordinary people helping each other too? In what ways? What role do volunteers have?

Because there are so many thousands or tens of thousands of Party members helping out, ordinary people have everything they need, so people don’t really need much help. That said, volunteers work to make sure that whatever does need doing gets done. For example, I have a brother volunteering in our neighbourhood who often helps out the other residents by buying them fruit, beer, medicine, things like that.

Okay, the last questions are about the Western media’s response to China’s fight against COVID. Some papers in Britain have been saying that China’s reported figures, like its death rate, are false, and that they’re actually much higher. What’s your opinion on this?

I don’t really want to say too much about politics. If someone has the “wrong” ideology then everything they say is going to be either biased or a lie, and you should know very well who owns the Western media and in whose interests it serves.

China is the only country with a 5,000-year history, and the last of the four ancient civilizations still in existence. Confucianism, the ideas of Confucius and Mencius, has been passed down from generation to generation, so of course we have ideological differences.

As for the figures, no one in the Party or the government would dare try to hide them. If they did, they’d lose their jobs. Take China’s strong testing and mobilisation capacity, for example. Since the start of the pandemic, how many masks, protective clothes, respirators, medical gloves, and all the rest has China provided to the world? If the rate of infection was higher, how could this all be manufactured? That’s just one piece of evidence.

Other papers have said that China’s policies are too strict, and that they infringe upon human rights. How would you respond to that?

They say that the numbers are too low, while also saying that the controls are too strict. Isn’t that a contradiction? Controls in China are strict, but the people understand and accept them.

Chinese people don’t think that having to stay inside is an infringement on their human rights, although there are a few isolated examples of extremely mechanical thinking. For example, a few days ago there was a pregnant woman in Xi’an who miscarried because she wasn’t allowed to enter a hospital more than 48 hours since her last COVID test, which led to a public outcry. It was a private hospital, people voted with their feet, and their stock value dropped by billions in just two days.

That said, the Party is very good at correcting its mistakes. That night, various places issued demands for special measures to be taken in special situations, and special out-patient wards were set up. None of this is my opinion, it’s just a statement of fact, and several leading government officials in the province have already been dismissed for failing to adequately respond to the pandemic.