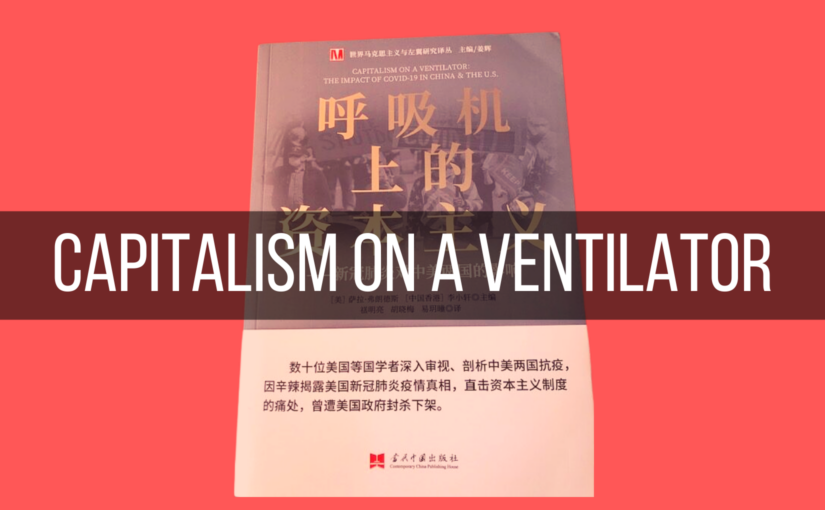 We’re pleased to republish this report from Workers World about the Chinese translation of the book Capitalism on a Ventilator — The Impact of COVID-19 in China & the US. The book contains chapters written by numerous left and anti-imperialist voices including Mumia Abu-Jamal, Lee Siu Hin, Margaret Kimberley, Vijay Prashad, Ngo Thanh Nhan, Ajamu Baraka, Max Blumenthal, Kevin Zeese, Margaret Flowers and Friends of Socialist China co-editor Carlos Martinez. We posted a review of the book here.

We have very exciting news! The Chinese translation of “Capitalism on a Ventilator — The Impact of COVID-19 in China & the U.S.” — originally published in 2020 by World View Forum as a joint project of the International Action Center and China-U.S. Solidarity Network — is out and being discussed in China.

“Capitalism on a Ventilator” was co-edited by Sara Flounders, Workers World contributing editor and co-coordinator of the International Action Center, and Lee Siu Hin, director of the China-U.S. Solidarity Network, who has been involved in the Asian Pacific American Labor Alliance.

The anthology contrasts the effective Chinese response to COVID-19 with the disastrous response here in the U.S. and pushes back against the racist anti-China campaign in the media. The book was a tremendous challenge, involving months of effort to gather the contents of the anthology and then to find printers, online publishers and distributors for the book, which was censored by Amazon.

Workers World writers, who followed the impact of COVID-19 from its beginning in the U.S., drew comparisons to China’s handling of the pandemic and raised demands and concrete struggles as the virus spread; their articles are quite prominent in the book. Other chapters are by well-recognized left and anti-imperialist voices: Mumia Abu-Jamal, Lee Siu Hin, Margaret Kimberley, Vijay Prashad, Ngo Thanh Nhan, Ajamu Baraka, Max Blumenthal, Kevin Zeese and Margaret Flowers.

Many of the chapters were first posted on workers.org and IACenter.org.

According to Wang Weiguang, Standing Committee Member of the Chinese People’s Political Consultative Conference National Committee, Director of the Ethnic and Religious Affairs Commission, Former President and former Party Secretary of Academic Department, Chinese Academy of Social Sciences: “The book, written by dozens of scholars from the United States and other countries, describes with realistic strokes the ‘grief’ and ‘pain’ of the American people under the impact of the new coronial pneumonia. It deeply analyzes and criticizes the capitalist system’s ability and efficiency to deal with sudden public health [crises] and exposes the most hypocritical, reactionary and backward side of the most developed capitalist countries in the world.”

Jiang Hui, Vice President of the Chinese Academy of Social Sciences, Member of Party Group, Director of Contemporary China Research Institute, Dean of Marxist Studies states: “In the strong contrast between China and the United States in the fight against SARS, the book uncovers the hypocritical side of the world’s most developed capitalist countries, sounds the ‘alarm bell’ of the ineffectiveness of capitalist governance and enlightens the public to explore a new way of thinking.”

Co-editor Flounders adds to these evaluations: “We could not have imagined how disastrous the virus impact would be in the U.S. and in other developed capitalist countries. As Marxists we did know that in a country totally dominated by a handful of billionaires, their interests in profiting from testing, vaccines, production of personal protective equipment and from the theft of our labor would overwhelm people’s need for free health care for all. Then the deaths tripled after the book came into print.

“To see the enthusiasm in China for this book is encouraging. China followed a scientific, people-oriented approach that prioritized the health and safety of the whole population. This gives us, as Marxists, a real-time comparison in the difference socialism makes in handling a new phenomenon.”