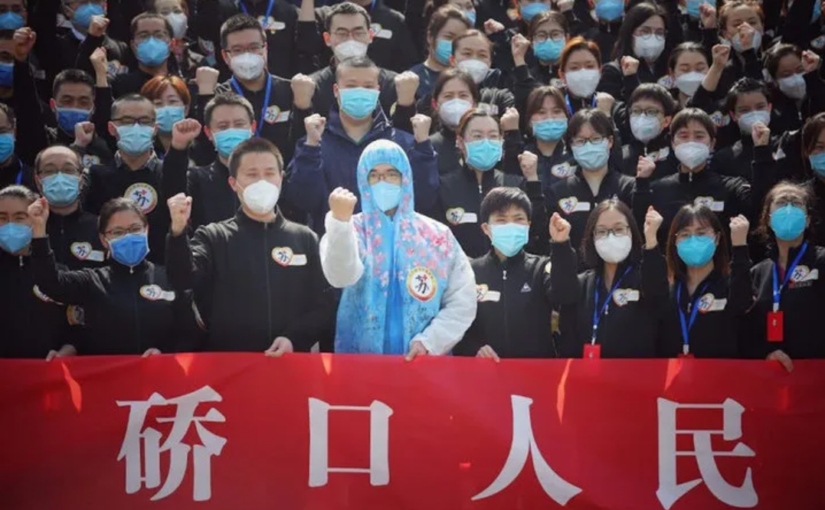 We are pleased to republish this article by Scott Scheffer in Struggle/La Lucha, cutting through the anti-China propaganda in relation to the struggle against Covid-19. Scott focuses on the story of Zhang Zhan, an anti-communist crusader and cause celebre of the Western media, who wilfully spread malicious slander about the Wuhan lockdown. Journalists and politicians in the West have leveraged this slander to vilify China’s dynamic Zero Covid strategy – a strategy that has saved several millions of lives in China and that countries such as the US and Britain could and should have learned from.

The U.S. media is spreading a message that the omicron variant of COVID-19 may be the final wave in the pandemic that has taken 5.63 million lives globally, and 875,000 in the U.S. – the U.S. has the highest death toll in the world.

Even as the death count in areas of the U.S. is rising as predicted by epidemiologists and virologists, a pro-business push to herd people back to work and students back to in-person classes is underway. The push has been embraced by the Centers for Disease Control, and by Biden’s Chief Medical Adviser, Anthony Fauci.

While omicron’s symptoms may be less severe than the delta variant, it is still a killer and is currently averaging 2,200 deaths per day throughout the country. Because it infects people so much more efficiently than previous variants, according to a Jan. 24 Reuters article, “The omicron death toll has now surpassed the height of deaths caused by the more severe delta variant when the seven-day average peaked at 2,078 on Sept. 23 last year.”

In the year 2021, there were 476,863 deaths from the disease in the U.S. During the same year, in China there were only two coronavirus deaths.

This yawning gap of a difference has had the U.S. propaganda machine – from intelligence agencies, to the White House and State Department and the multi-millionaire spokesmodels that serve as newscasters – spinning a defensive web of lies and all manner of slander against every aspect of China’s “People’s War” against the virus. The bogus “lab leak” theory has lost steam, but the latest tirade is to rally around the case of Zhang Zhan, a right-wing, anti-communist crusader, championed by the Western media and by Amnesty International.

At the beginning of the pandemic

Zhang, who calls herself a “citizen journalist,” was arrested by Chinese authorities in May of 2020. She had traveled to Wuhan in February 2020, at the beginning of the pandemic. She didn’t go there to help in the way that tens of thousands of Chinese volunteers did at the risk of their own health. Instead, she went to record and publish video to opportunistically show the suffering and bolster the U.S. cold-war propaganda that was already underway before the pandemic.

Zhang recorded video at crematoria in Wuhan and at overcrowded hospitals that were in crisis mode. She posted videos on YouTube accusing the government of “intimidation and threats” and claiming that people were going hungry and being neglected. She did all of this as scientists and government leaders were scrambling to understand and gain control of the virus. If she had arrived several weeks later she would have witnessed the beginning of the end for the initial short-lived torrent of death. For nearly two years now, only 3 people have died of Covid in China.

Zhang is a longtime participant of the U.S. system that churns out lies and foments counterrevolutions. The National Endowment for Democracy and other neo-CIA organizations have nurtured “protest” groups in Hong Kong and Taiwan and have supported the “Weiquan movement” in mainland China, which Zhang is a participant in. They spout the usual laundry list of “issues” against the Communist Party leadership. Sometimes their message is not subtle criticism. While the U.S. pushed the anti-communist “protest” movement in Hong Kong in 2019, Zhang held up an umbrella in Shanghai emblazoned with the words “End socialism, Communist Party down.”

Her case has garnered sympathy from organizations that are based on anti-communism as they stand as opponents of human rights abuses. Her history of engaging in “hunger strikes” gives her a façade that appeals to “liberal” media outlets like the Guardian and the New York Times, and nongovernmental organizations like Amnesty International, as well as the  the United Nations human rights office.

Zhang’s mother told the press that she’s very concerned because her daughter is only eating fruit and cookies. Admittedly, that is not the healthiest diet and that would concern any mother, but it is not a hunger strike. Zhang is not anything like Bobby Sands or the other Irish republican hunger strikers in the struggle against British imperialism or any of the Palestinian hunger strikers protesting their imprisonment without trial by the Zionist occupation regime of Israel.

China has literally saved millions of lives through their “People’s War” and their continuing zero-COVID campaign. China’s international medical solidarity, and their call for global cooperation to aid Africa, Asia and Latin America points the way forward to end the pandemic. Regardless of whatever media campaign they are using, the U.S. will never be able to drive a wedge between the Chinese people and the Chinese Communist leadership.